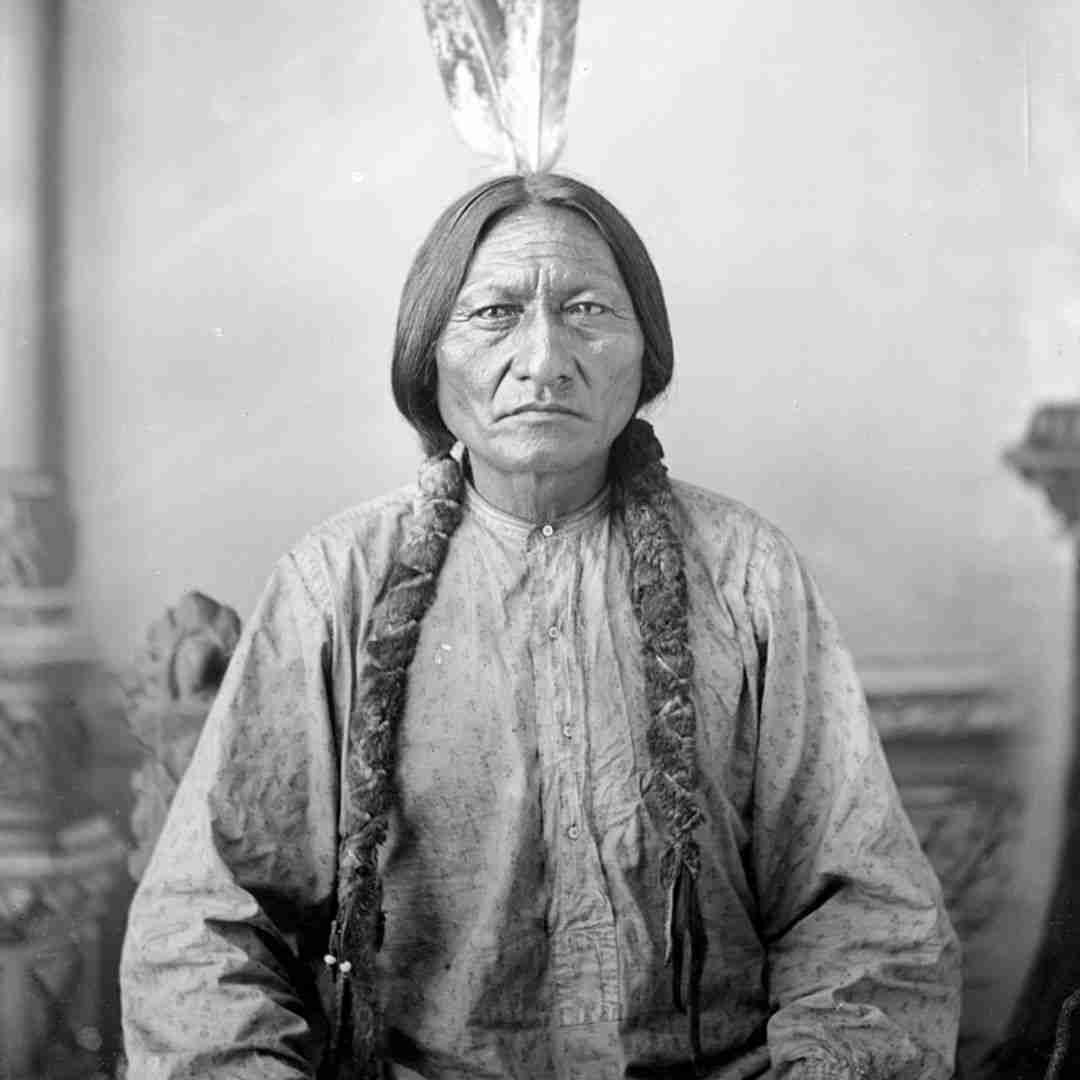 There are numerous books on Sitting Bull, and it comes with good reason, he was a Hunkpapa Lakota leader who guided his people during years of resistance against the United States government’s policies.

“Let us put our minds together and see what life we can make for our children,” he remarked.

In order to get to the bottom of what inspired one of America’s most consequential figures, we’ve compiled a list of the 5 best books on Sitting Bull.

Sitting Bull: The Life and Times of an American Patriot by Robert M. Utley 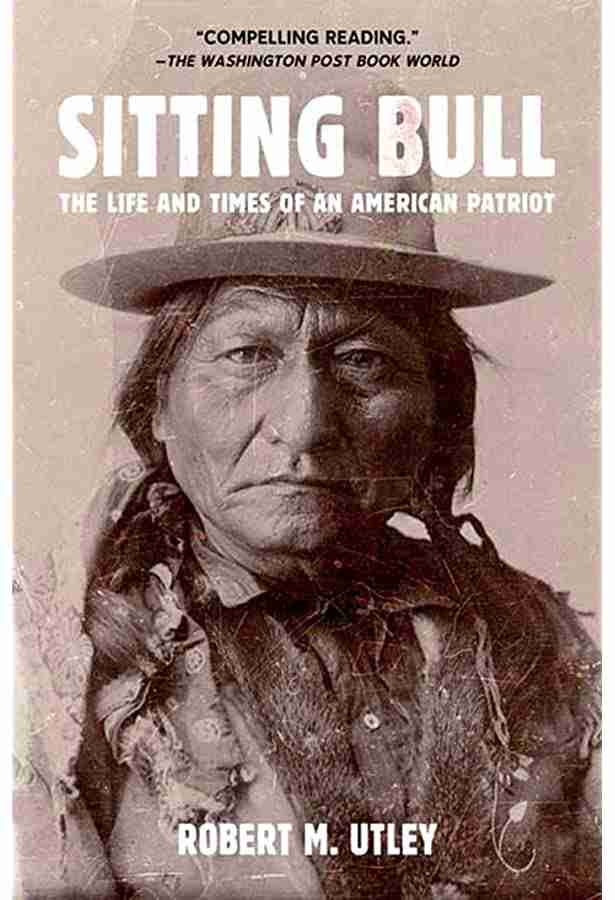 Reviled by the United States government as a troublemaker and a coward, revered by his people as a great warrior chief, Sitting Bull has long been one of the most fascinating and misunderstood figures in American history. Distinguished historian Robert M. Utley has forged a compelling portrait of Sitting Bull, presenting the Lakota perspective for the first time and rendering the most unbiased, historically accurate, and vivid portrait of the man to date.

The Sitting Bull who emerges in this fast-paced narrative is a complex, towering figure: a great warrior whose skill and bravery in battle were unparalleled; the spiritual leader of his people; a dignified but ultimately tragically stubborn defender of the traditional ways against the steadfast and unwelcome encroachment of the white man. 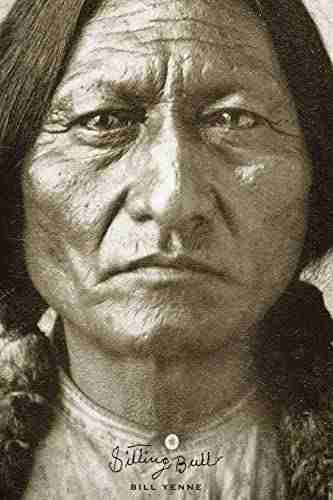 Tracing Sitting Bull’s history from a headstrong youth and his first contact with encroaching settlers, through his ascension as the spiritual and military leader of the Lakota, friendship with a Swiss-American widow from New York, and death at the hands of the Indian police on the eve of the massacre at Wounded Knee, Yenne scoured rare contemporary records and consulted Sitting Bull’s own “Hieroglyphic Autobiography” in the course of his research.

While Sitting Bull was the leading figure of Plains Indian resistance, his message was of self-reliance, not violence. At the Battle of the Little Bighorn, Sitting Bull was not confronting Custer as popular myth would have it, but riding through the Lakota camp making sure the most defenseless of his tribe – the children – were safe. In this gem among books on Sitting Bull, we find a man who, in the face of an uncertain future, helped ensure the survival of his people.

The Earth is All That Lasts by Mark E. Gardner 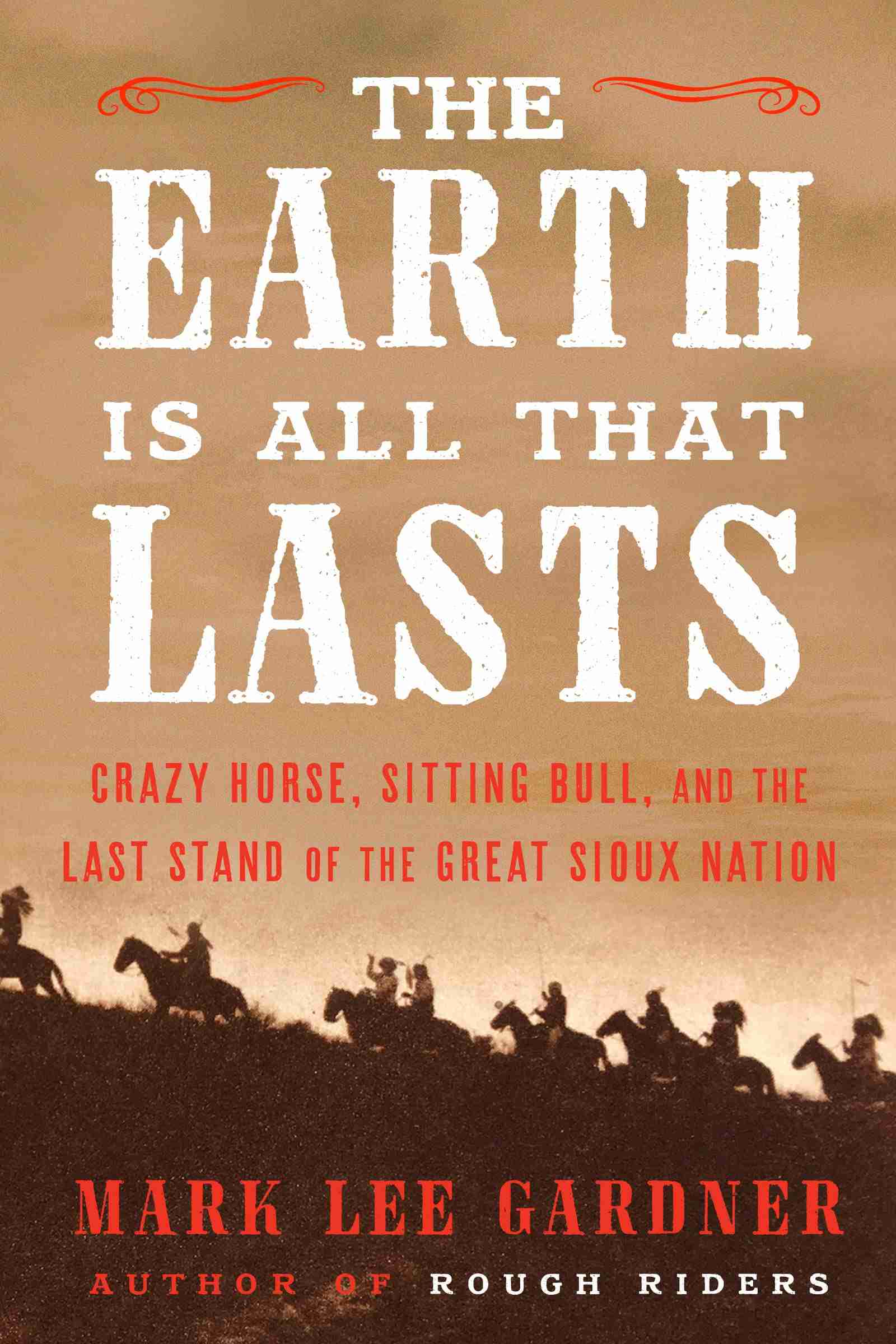 Crazy Horse and Sitting Bull: Their names are iconic, their significance in American history undeniable. Together, these two Lakota chiefs, one a fabled warrior and the other a revered holy man, crushed George Armstrong Custer’s vaunted Seventh Cavalry. Yet their legendary victory at the Little Big Horn has overshadowed the rest of their rich and complex lives. Now, based on years of research and drawing on a wealth of previously ignored primary sources, award-winning author Mark Lee Gardner delivers the definitive chronicle, thrillingly told, of these extraordinary Indigenous leaders.

Both Crazy Horse and Sitting Bull were born and grew to manhood on the High Plains of the American West, in an era when vast herds of buffalo covered the earth, and when their nomadic people could move freely, following the buffalo and lording their fighting prowess over rival Indian nations. But as idyllic as this life seemed to be, neither man had known a time without whites.

Fur traders and government explorers were the first to penetrate Sioux lands, but they were soon followed by a flood of white intruders: Oregon-California Trail travelers, gold seekers, railroad men, settlers, town builders – and Bluecoats. The buffalo population plummeted, disease spread by the white man decimated villages, and conflicts with the interlopers increased.

On June 25, 1876, in the valley of the Little Big Horn, Crazy Horse and Sitting Bull, and the warriors who were inspired to follow them, fought the last stand of the Sioux, a fierce and proud nation that had ruled the Great Plains for decades. It was their greatest victory, but it was also the beginning of the end for their treasured and sacred way of life. And in the years to come, both Crazy Horse and Sitting Bull, defiant to the end, would meet violent – and eerily similar – fates. 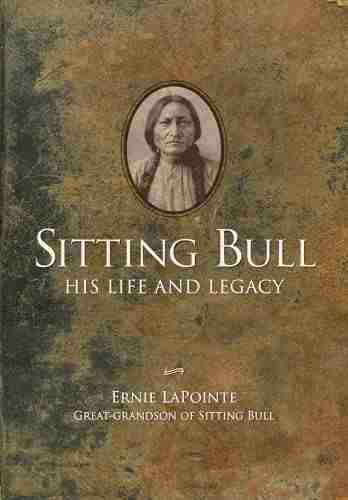 Ernie LaPointe is the great-grandson of the famous Hunkpapa Lakota chief, and he presents the family tales and memories told to him about his great-grandfather. In many ways the oral history differs from what has become the standard and widely accepted biography of Sitting Bull. LaPointe explains the discrepancies, how they occurred, and why he wants to tell his story of Tatanka Iyotake.

Ernie LaPointe, a great-grandson of Sitting Bull, was born on the Pine Ridge Indian Reservation in South Dakota. He is a Sundancer and lives the traditional way of the Lakota and follows the rules of the sacred pipe. He lives in South Dakota. 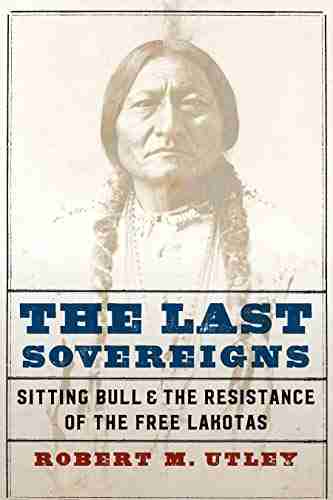 The Last Sovereigns is the story of how Sioux chief Sitting Bull resisted the white man’s ways as a last best hope for the survival of an indigenous way of life on the Great Plains – a nomadic life based on buffalo and indigenous plants scattered across the Sioux’s historical territories that were sacred to him and his people.

Robert M. Utley explores the final four years of Sitting Bull’s life of freedom, from 1877 to 1881. To escape American vengeance for his assumed role in the annihilation of Gen. George Armstrong Custer’s command at the Little Bighorn, Sitting Bull led his Hunkpapa following into Canada. There he and his people interacted with the North-West Mounted Police, in particular Maj. James M. Walsh. The Mounties welcomed the Lakota and permitted them to remain if they promised to abide by the laws and rules of Queen Victoria, the White Mother.

But the Canadian government wanted the Indians to return to their homeland and the police made every effort to persuade them to leave. They were aided by the diminishing herds of buffalo on which the Indians relied for sustenance and by the aggressions of Canadian Native groups that also relied on the buffalo. Sitting Bull and his people endured hostility, tragedy, heartache, indecision, uncertainty, and starvation and responded with stubborn resistance to the loss of their freedom and way of life. In the end, starvation doomed their sovereignty. This is their story. 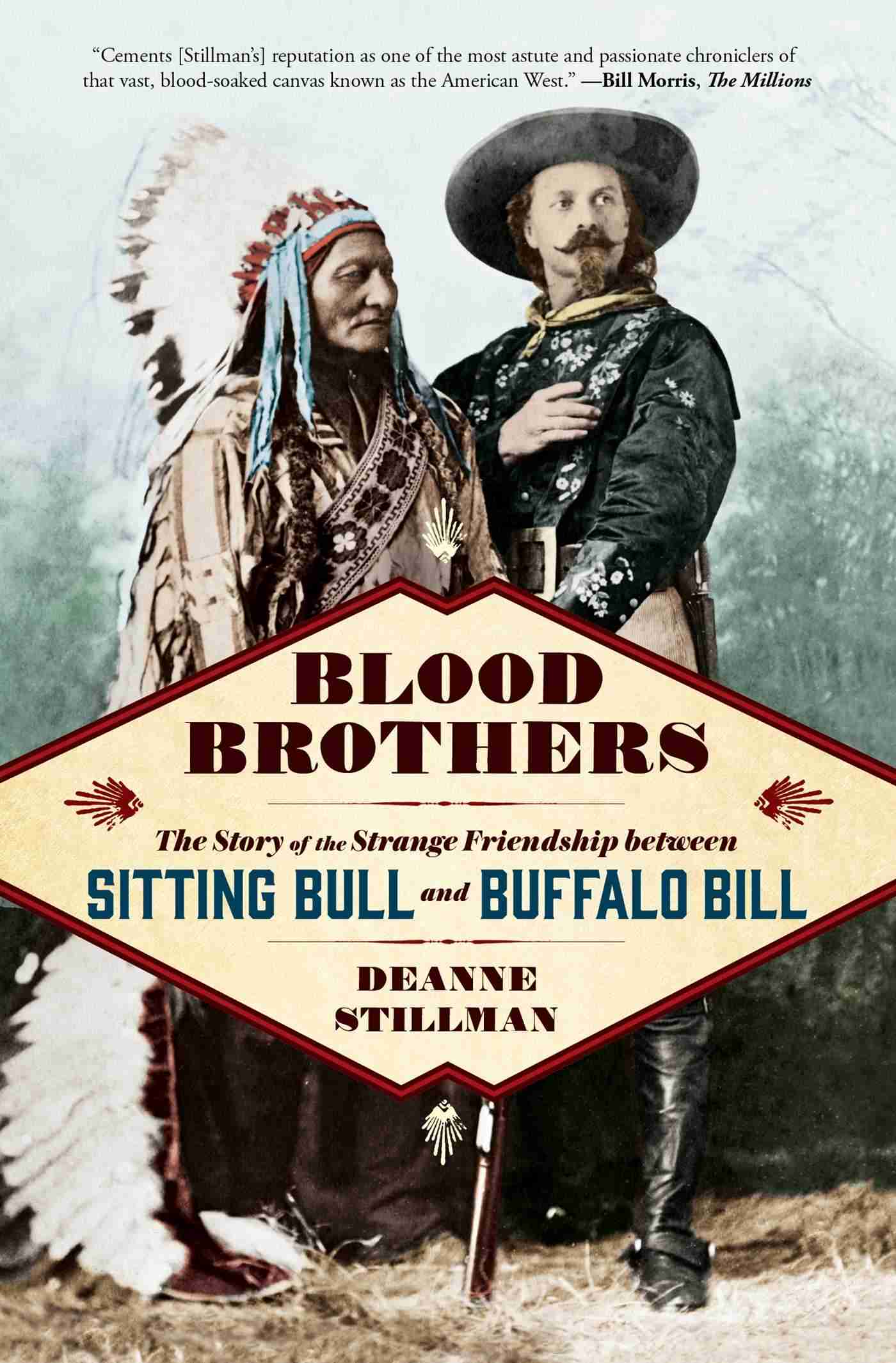 It was in Brooklyn, New York, in 1883 that William F. Cody – known across the land as Buffalo Bill – conceived of his Wild West show, an “equestrian extravaganza” featuring cowboys and Indians. The idea took off. For four months in 1885 the Lakota chief Sitting Bull appeared in the show. Blood Brothers tells the story of these two iconic figures through their brief but important collaboration.

The riveting account flashes back to 1876, when the Lakota wiped out Custer’s 7th Cavalry unit at the Little Big Horn. Sitting Bull did not participate in the “last stand,” but was nearby – and blamed for killing Custer. The book also flashes forward to 1890, when Sitting Bull was assassinated. Hours before, Cody rushed to Sitting Bull’s cabin at Standing Rock, dispatched by the army to avert a disaster.

Deanne Stillman unearths little told details about the two men and their tumultuous times. Their alliance was eased by none other than Annie Oakley. When Sitting Bull joined the Wild West, the event spawned one of the earliest advertising slogans: “Foes in ’76, Friends in ’85” – referring to the Little Big Horn. Cody paid his performers well, and he treated the Indians no differently from white performers.

During this time, the Native American rights movement began to flourish. But with their way of life in tatters, the Lakota and others availed themselves of the chance to perform in the Wild West. When Cody died in 1917, a large contingent of Native Americans attended his public funeral. 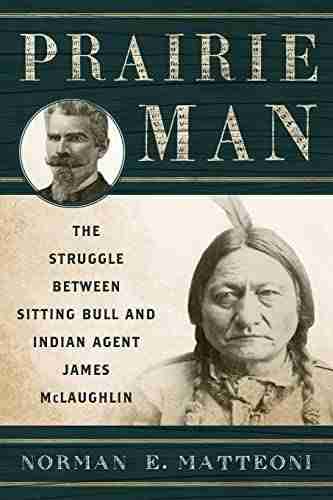 One week after the infamous June 1876 Battle of the Little Big Horn, when news of the defeat of General George Armstrong Custer and his 7th Cavalry troops reached the American public, Sitting Bull became the most wanted hostile Indian in America. He had resisted the United States’ intrusions into Lakota prairie land for years, refused to sign treaties, and called for a gathering of tribes at Little Big Horn. He epitomized resistance.

Sitting Bull’s role at Little Big Horn has been the subject of hundreds of historical works, but while Sitting Bull was in fact present, he did not engage in the battle. The conflict with Custer was a benchmark to the subsequent events. There are other battles than those of war, and the conflict between Sitting Bull and Indian Agent James McLaughlin was one of those battles. Theirs was a fight over the hearts and minds of the Lakota.

U.S. Government policy toward Native Americans after Little Big Horn was to give them a makeover as Americans after finally and firmly displacing them from their lands. They were to be reconstituted as Christian, civilized, and made farmers. Sitting Bull, when forced to accept reservation life, understood who was in control, but his view of reservation life was very different from that of the Indian Bureau and its agents.

His people’s birthright was their native heritage and culture. Although redrawn by the Government, he believed that the prairie land still held a special meaning of place for the Lakota. Those in power dictated a contrary view – with the closing of the frontier, the Indian was challenged to accept the white road or vanish, in the case of the Lakota, that position was given personification in the form of Agent James McLaughlin. This book explores the story within their conflict and offers new perspectives and insights.

If you enjoyed this guide to essential books on Sitting Bull, check out our list of The 5 Best Books on Crazy Horse!