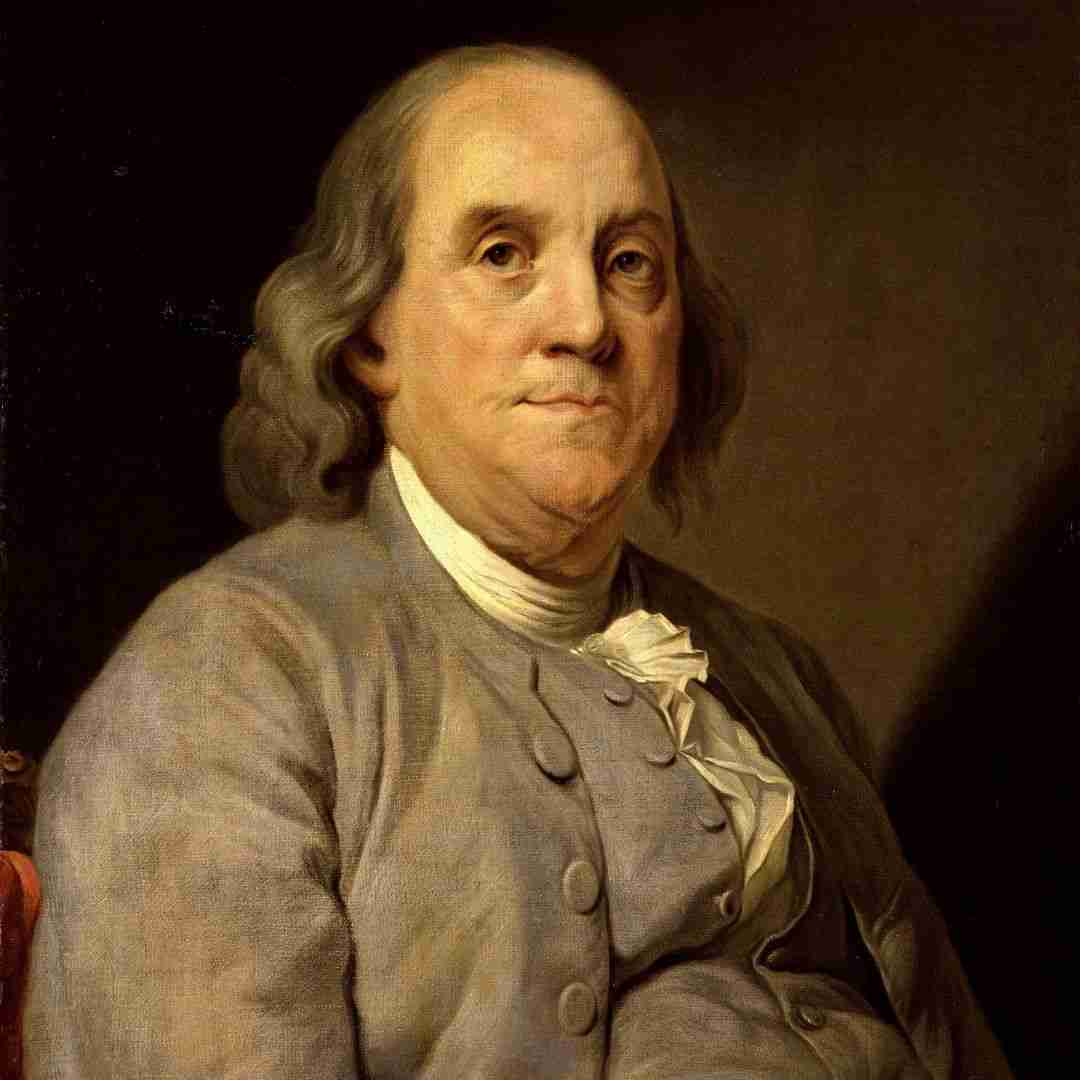 There are countless books on Benjamin Franklin, and it comes with good reason, he was a successful printer, founding father of the United States of America, scientist celebrated for his discoveries and theories in the realm of electricity, and leading intellectual of his time.

“Early to bed and early to rise makes a man healthy, wealthy, and wise,” he remarked.

In order to get to the bottom of what inspired one of history’s most consequential figures to the heights of societal contribution, we’ve compiled a list of the 10 best books on Benjamin Franklin. 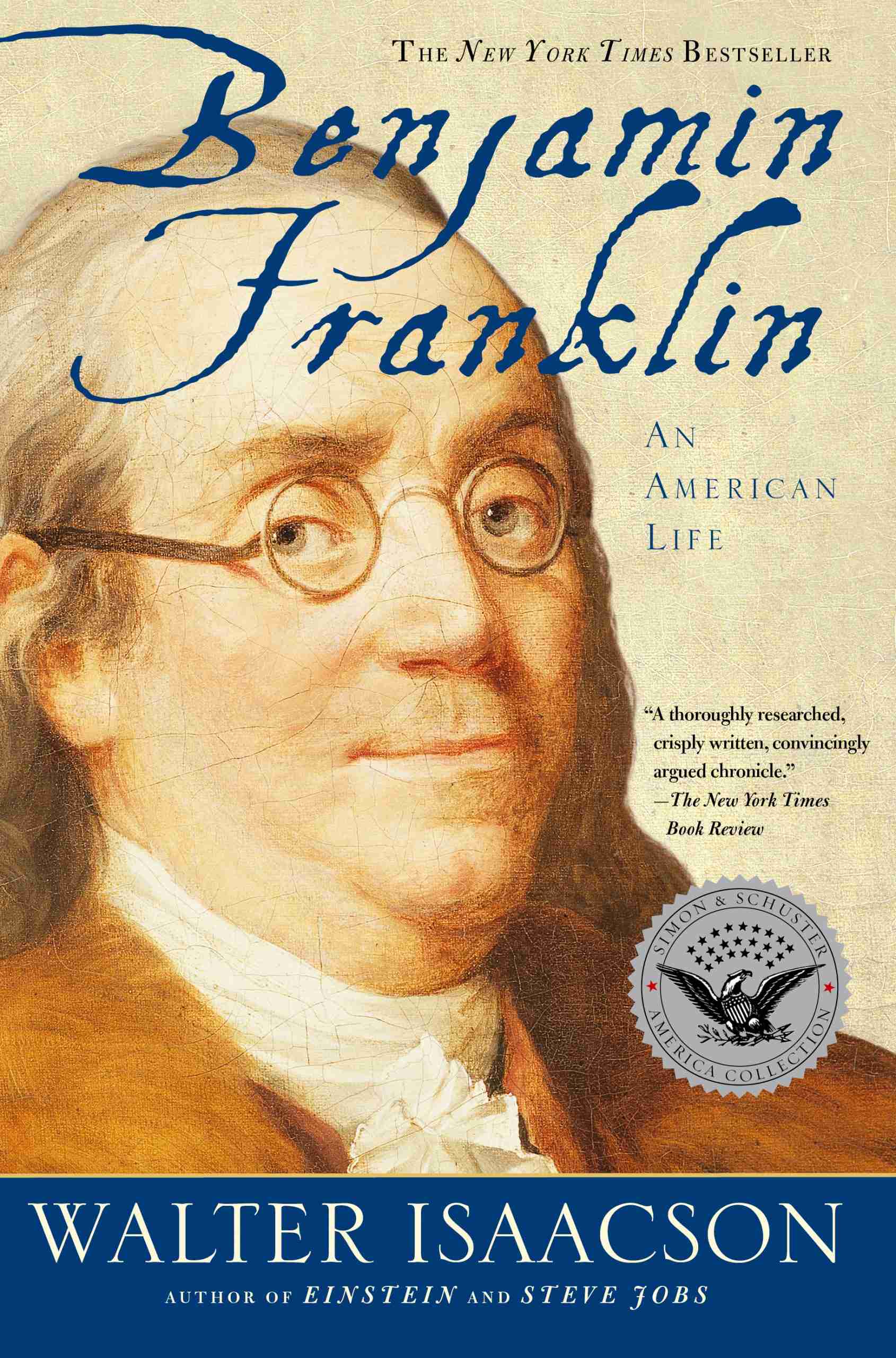 Benjamin Franklin is the founding father who winks at us, the one who seems made of flesh rather than marble. In a sweeping narrative that follows Franklin’s life from Boston to Philadelphia to London and Paris and back, Walter Isaacson chronicles the adventures of the runaway apprentice who became, over the course of his eighty-four-year life, America’s best writer, inventor, media baron, scientist, diplomat, and business strategist, as well as one of its most practical and ingenious political leaders.

He explores the wit behind Poor Richard’s Almanac and the wisdom behind the Declaration of Independence, the new nation’s alliance with France, the treaty that ended the Revolution, and the compromises that created a near-perfect Constitution. In this colorful and intimate narrative, Isaacson provides the full sweep of Franklin’s amazing life, showing how he helped to forge the American national identity and why he has a particular resonance in the twenty-first century. 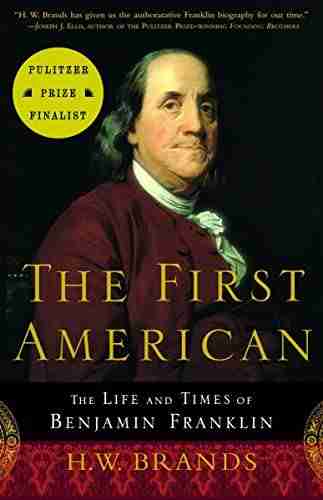 From penniless runaway to highly successful printer, from ardently loyal subject of Britain to architect of an alliance with France that ensured America’s independence, Franklin went from obscurity to become one of the world’s most admired figures, whose circle included the likes of Voltaire, Hume, Burke, and Kant.

Drawing on previously unpublished letters and a host of other sources, acclaimed historian H. W. Brands has written a thoroughly engaging biography of the eighteenth-century genius. A much needed reminder of Franklin’s greatness and humanity, The First American is a work of meticulous scholarship that provides a magnificent tour of a legendary historical figure, a vital era in American life, and the countless arenas in which the protean Franklin left his legacy. 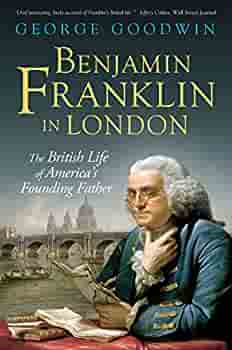 For more than one-fifth of his life, Benjamin Franklin lived in London. He dined with prime ministers, members of parliament, even kings, as well as with Britain’s most esteemed intellectuals – including David Hume, Joseph Priestley, and Erasmus Darwin – and with more notorious individuals, such as Francis Dashwood and James Boswell. Having spent eighteen formative months in England as a young man, Franklin returned in 1757 as a colonial representative during the Seven Years’ War, and left abruptly just prior to the outbreak of America’s War of Independence, barely escaping his impending arrest.

In this necessary addition to the ever-growing index of books on Benjamin Franklin, George Goodwin gives a colorful account of the founding father’s British years. The author offers a rich and revealing portrait of one of the most remarkable figures in U.S. history, effectively disputing the commonly held perception of Franklin as an outsider in British politics. It is an enthralling study of an American patriot who was a fiercely loyal British citizen for most of his life – until forces he had sought and failed to control finally made him a reluctant revolutionary at the age of sixty-nine.

The Autobiography of Benjamin Franklin 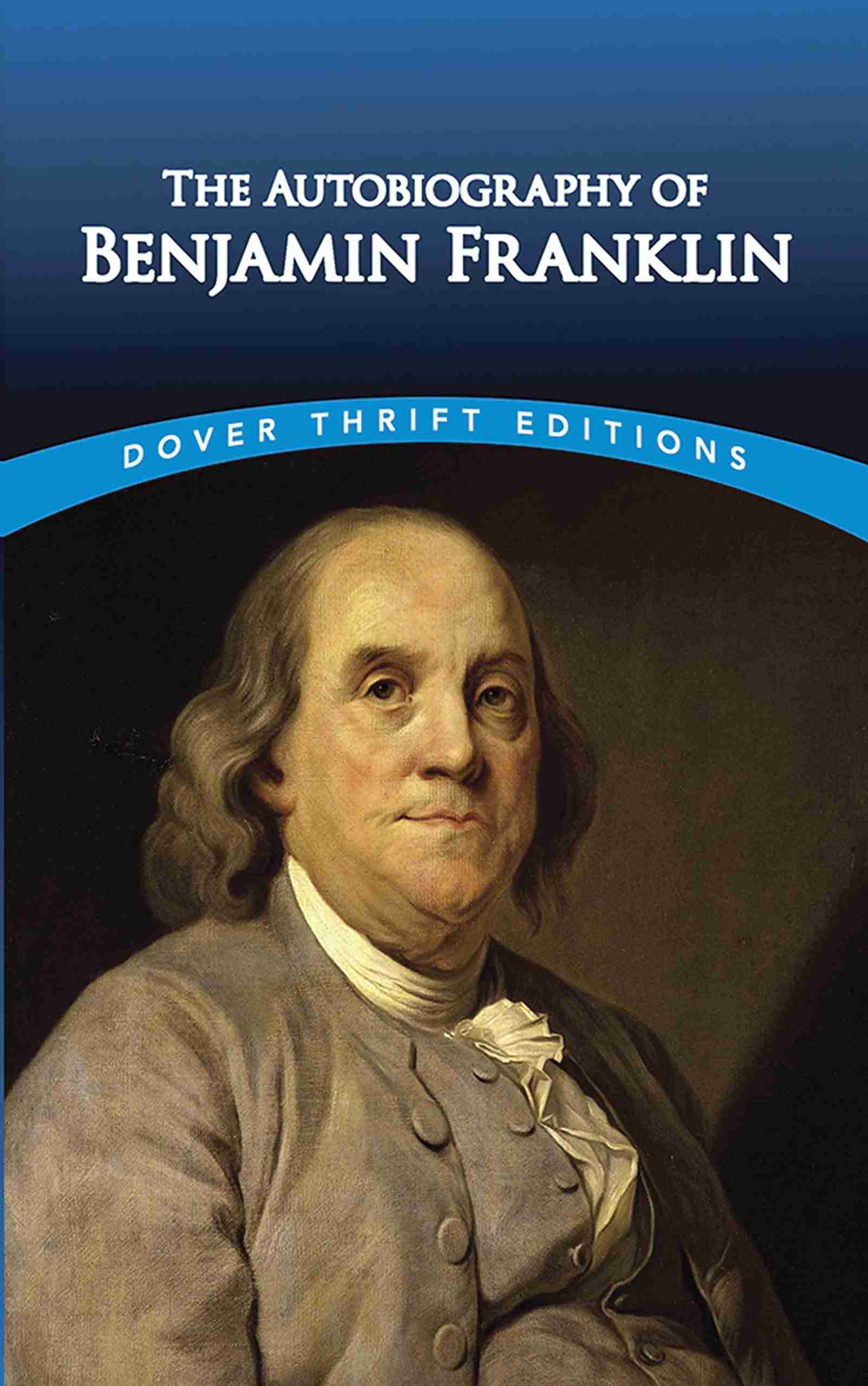 At 17 years old, Benjamin Franklin saw no path forward but to start his life over. After sneaking on board a ship destined for New York, in just three days, he found himself nearly 300 miles from home, without the least recommendation to, or knowledge of any person in the place, and with very little money in his pocket.

The Autobiography of Benjamin Franklin is the traditional name for the unfinished record of his own life written by Benjamin Franklin from 1771 to 1790; however, Franklin himself appears to have called the work his Memoirs. Although it had a tortuous publication history after Franklin’s death, this work has become one of the most famous and influential examples of an autobiography ever written.

The Americanization of Benjamin Franklin by Gordon S. Wood 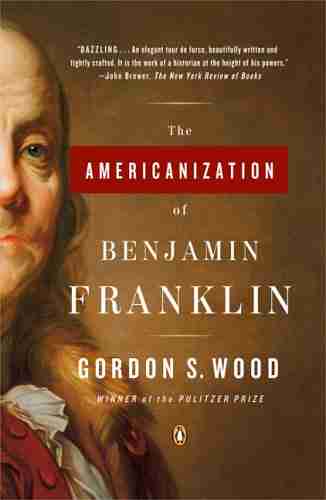 A leading historian of the American Revolution offers an incisive portrait of the complex, often contradictory figure of Benjamin Franklin, a man who was at once the quintessential American and a cosmolitan lover of Europe, a one-time loyalist turned revolutionary, and an ambassador whose French diplomacy, crucial to the American cause, became a source of suspicion at home.

Until now Benjamin Franklin has usually been incorrectly regarded as a practical inventor and tinkerer rather than a scientific thinker. He was elected to membership in the elite Royal Society because his experiments and original theory of electricity had made a science of that new subject. His popular fame came from his two lightning experiments – the sentry-box experiment and the later and more famous experiment of the kite – which confirmed his theoretical speculations about the identity of electricity and provided a basis for the practical invention of the lightning rod. Franklin advanced the eighteenth-century understanding of all phenomena of electricity and provided a model for experimental science in general.

I. Bernard Cohen, an eminent historian of science and the principal elucidator of Franklin’s scientific work, examines his activities in fields ranging from heat to astronomy. He provides masterful accounts of the theoretical background of Franklin’s science (especially his study of Newton), the experiments he performed, and their influence throughout Europe as well as the United States.

Cohen emphasizes that Franklin’s political and diplomatic career cannot be understood apart from his scientific activities, which established his reputation and brought him into contact with leaders of British and European society. 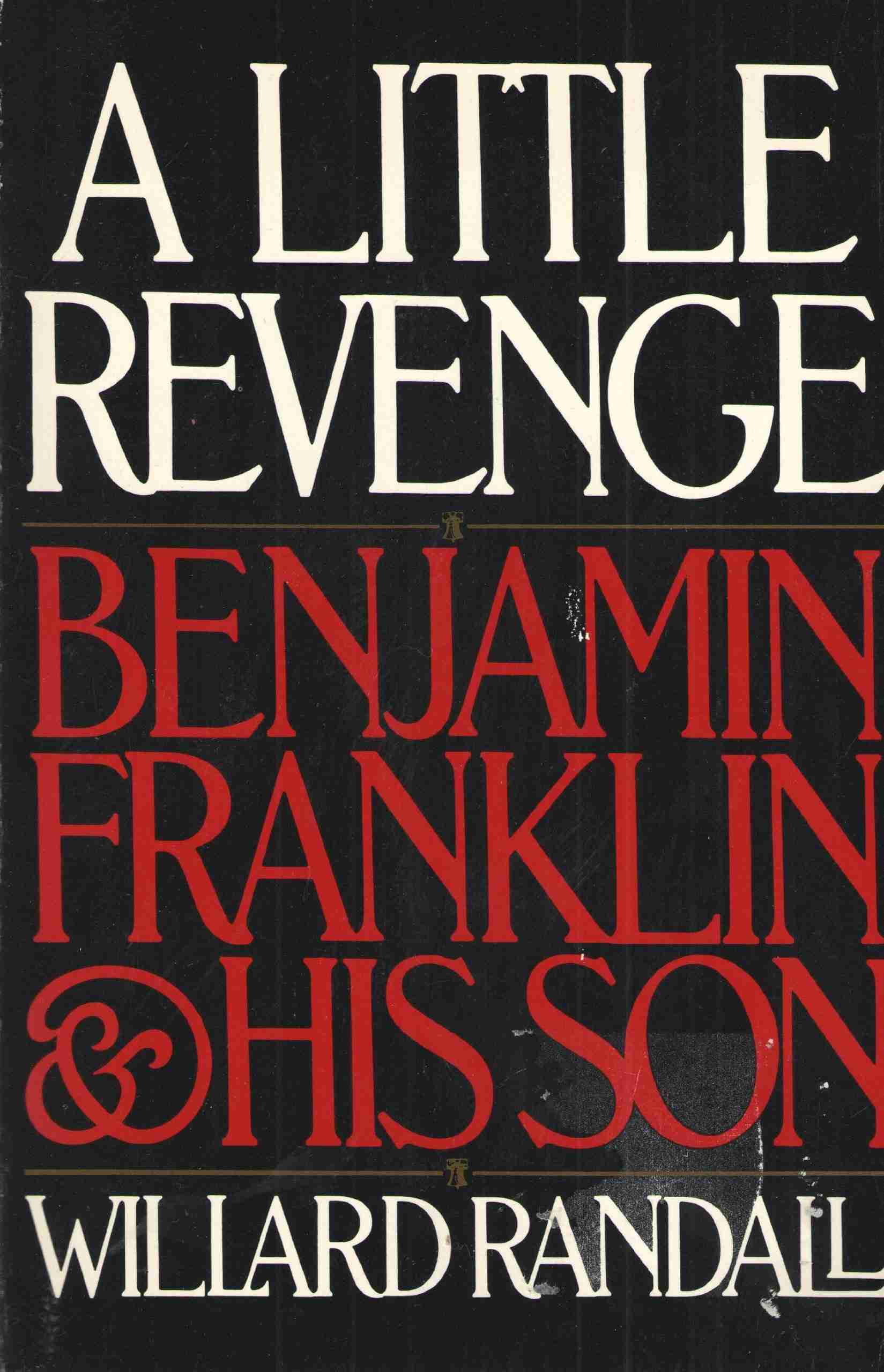 A Little Revenge is the story of the relationship between Benjamin Franklin and his illegitimate son, William. A brilliant young man who first served Benjamin as military advisor and legal counsel, William eventually rose to be Royal Governor of New Jersey, only to become his father’s implacable enemy.

When the American Revolution broke out and William refused to follow his father and remained loyal to the British Crown, an enmity developed that was frightening in its ferocity. Then, William was captured by the rebels and his father made sure he was confined to a notorious prison, he even intervened in Washington’s attempt to free William through an exchange of prisoners.

Once William did secure his freedom, he became deeply involved in the illegal execution of rebel prisoners. William was exiled to Britain, and he and Benjamin lived out their lives without ever forgiving the other. In fact, after the Revolution, they spoke only once to each other.

Benjamin Franklin: The Religious Life of a Founding Father by Thomas S. Kidd 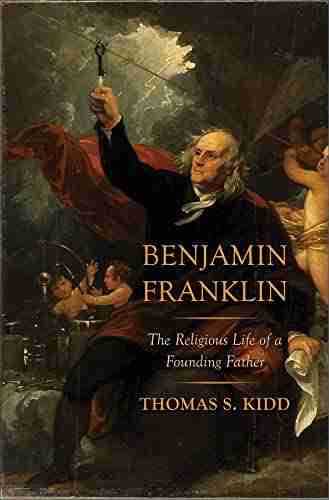 Benjamin Franklin published more works on religious topics than any other eighteenth-century American layperson. Born to Boston Puritans, by his teenage years he had abandoned the exclusive Christian faith of his family and embraced deism. But Franklin, as a man of faith, was far more complex than the “thorough deist” who emerges in his autobiography.

As Thomas Kidd reveals, deist writers influenced Franklin’s beliefs, to be sure, but devout Christians in his life – including George Whitefield, the era’s greatest evangelical preacher; his parents; and his beloved sister Jane – kept him tethered to the Calvinist creed of his Puritan upbringing. Based on rigorous research into Franklin’s voluminous correspondence, essays, and almanacs, this fresh assessment of a well-known figure unpacks the contradictions and conundrums faith presented in Franklin’s life. 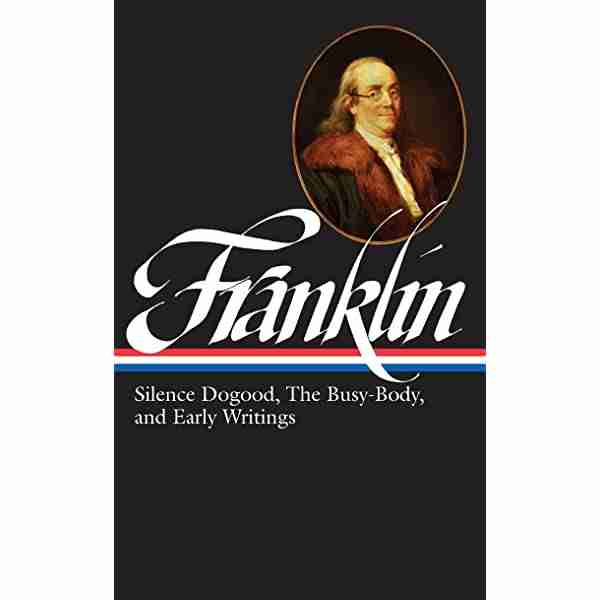 Statesman, scientist, philosopher, printer, and civic leader, Benjamin Franklin was also the most powerful writer of his time. From his first appearance in print, in the guise of the eccentric, opinionated, voluble “Silence Dogood” (1722), to his last published article, a searing satire against slavery (1790), he covered every aspect of “the question of America” with radiant clarity, wit, and penetration.

This Library of America collection begins with items written by Franklin during his early years in Boston and London (1722–1726), including the complete “Silence Dogood” essay series. The volume also includes the famous “Busy-Body” essays (1728–1729); many of the news articles and essays he penned after he purchased the failing Pennsylvania Gazette (which eventually became the most widely read newspaper in the colonies); and various political satires, pamphlets, and personal correspondence written while he lived in Philadelphia from 1726 to 1757. The book concludes with material he published while a diplomat in London from 1757 to 1775 (including letters to the press, satires, and pamphlets).

Controversial in his own time, and the subject of vigorous debate ever since – to Matthew Arnold he exemplified “victorious good sense,” while to D. H. Lawrence he was “the first dummy American” – Franklin emerges in this collection as a figure of extraordinary complexity for readers to discover, consider, and appreciate anew. 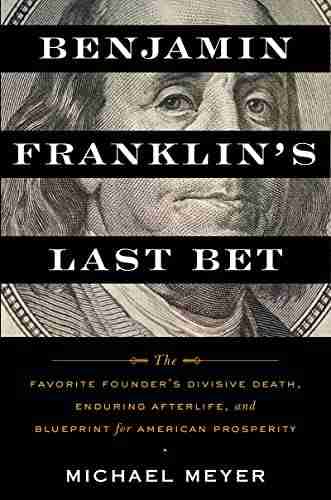 Benjamin Franklin was not a gambling man. But at the end of his illustrious life, the Founder allowed himself a final wager on the survival of the United States: a gift of two thousand pounds to Boston and Philadelphia, to be lent out to tradesmen over the next two centuries to jump-start their careers. Each loan would be repaid with interest over ten years. If all went according to Franklin’s inventive scheme, the accrued final payout in 1991 would be a windfall.

In this revelatory treat among books on Benjamin Franklin and his business dealings, Michael Meyer traces the evolution of these twin funds as they age alongside America itself, bankrolling woodworkers and silversmiths, trade schools and space races. Over time, Franklin’s wager was misused, neglected, and contested – but never wholly extinguished. With charm and inquisitive flair, Meyer shows how Franklin’s stake in the “leather-apron” class remains in play to this day, and offers an inspiring blueprint for prosperity in our modern era of growing wealth disparity and social divisions. 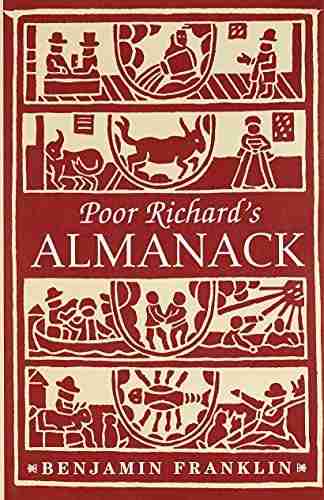 Poor Richard’s Almanack (sometimes Almanac) was a yearly almanac published by Benjamin Franklin, who adopted the pseudonym of “Poor Richard” or “Richard Saunders” for this purpose. The publication appeared continually from 1732 to 1758. It sold exceptionally well for a pamphlet published in the Thirteen Colonies. This is a faithful reproduction of the original Peter Pauper Press edition of Poor Richard’s Almanack, circa 1950, the current version contains the same colorful woodcuts and 18th-century design of the original.

If you enjoyed this guide to essential books on Benjamin Franklin, check out our list of The 10 Best Books on President George Washington!