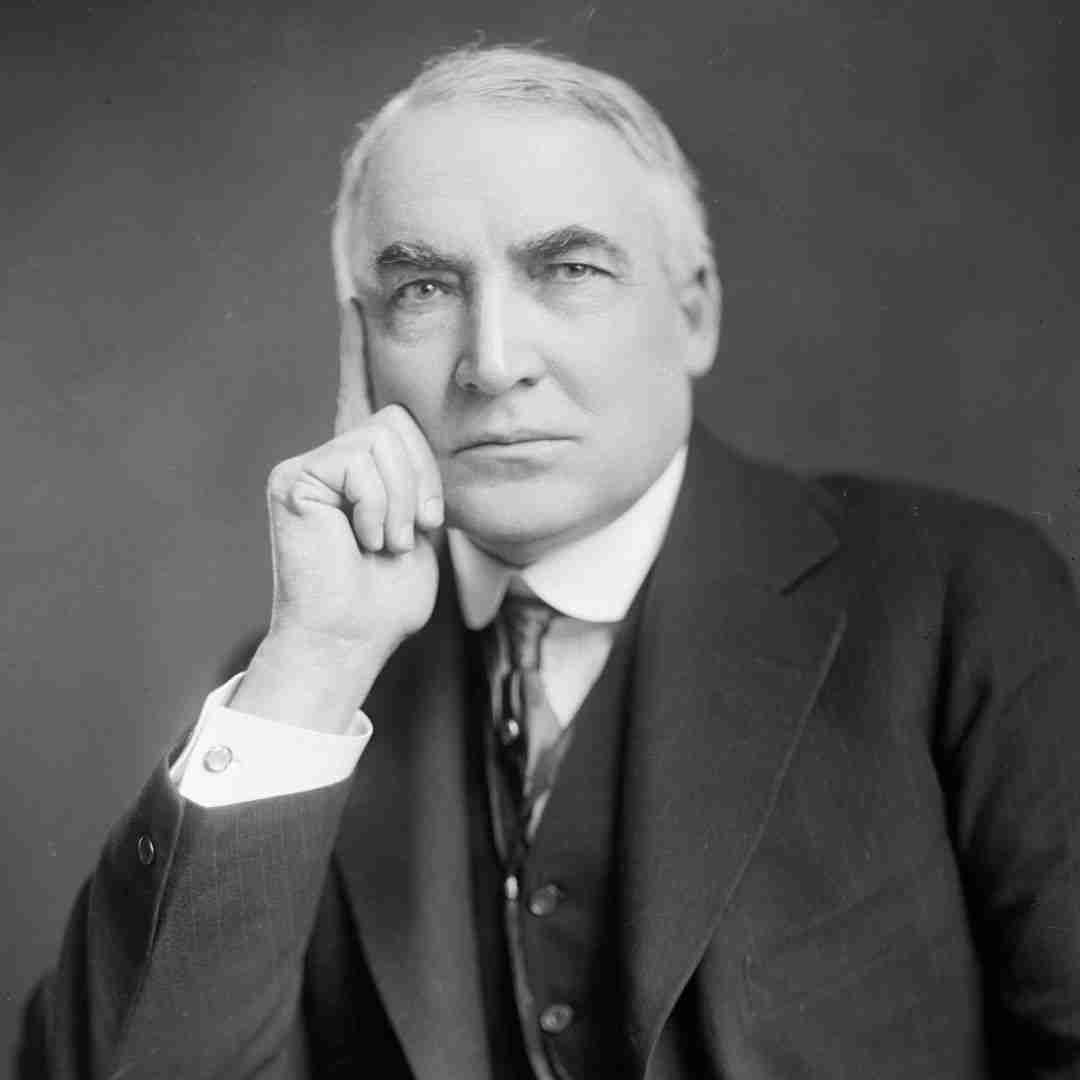 There are numerous books on Warren Harding, and it comes with good reason, aside from being elected America’s twenty-ninth President (1921-1923) and overseeing an administration drought with scandal, including Teapot Dome, he embraced technology and was sensitive to the plights of minorities and women.

“We must have a citizenship less concerned about what the government can do for it and more anxious about what it can do for the nation,” he remarked.

In order to get to the bottom of what inspired one of history’s most consequential figures to the heights of societal contribution, we’ve compiled a list of the 10 best books on Warren Harding. 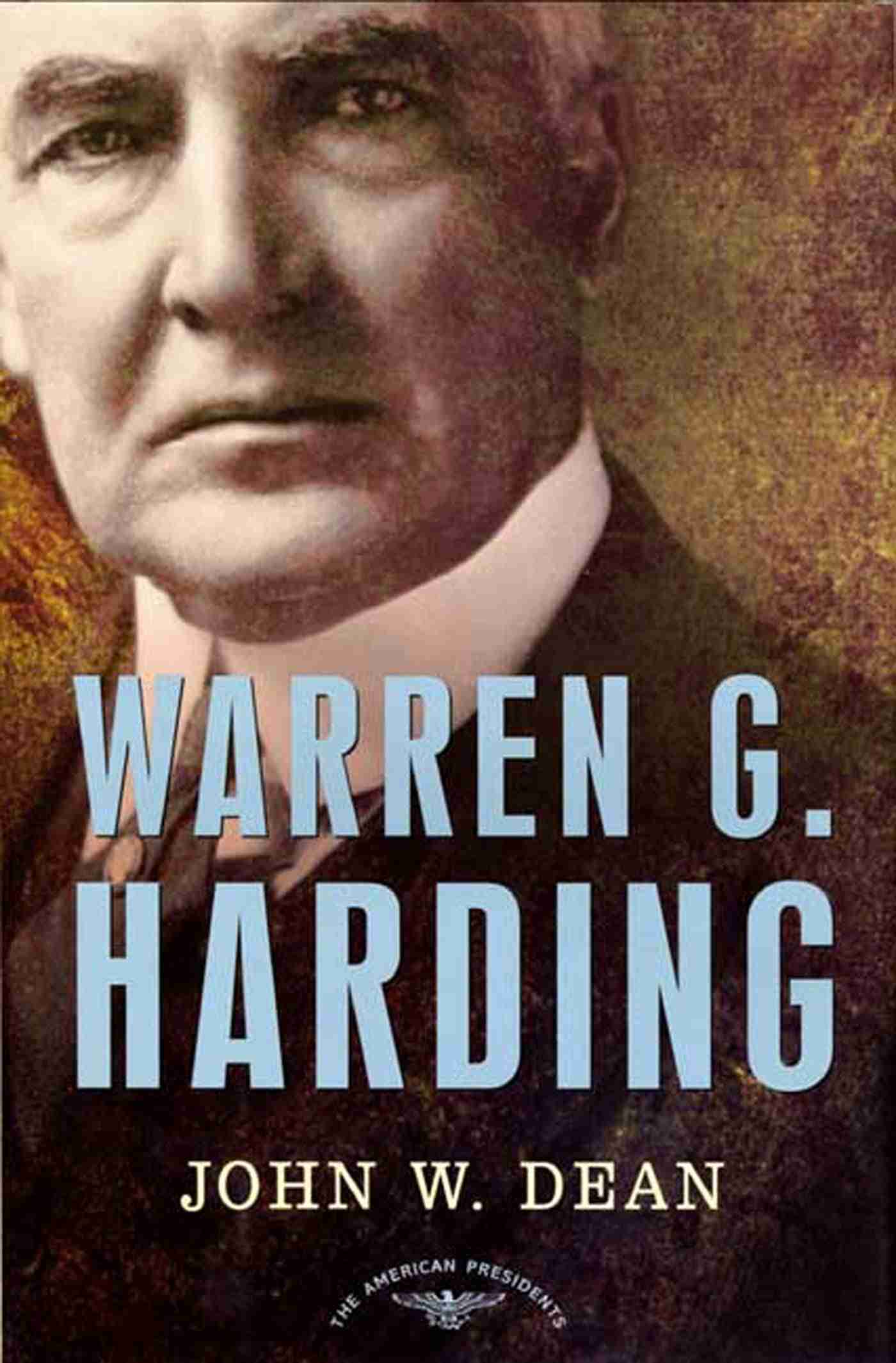 Warren G. Harding may be best known as America’s worst president. Scandals plagued him: the Teapot Dome affair, corruption in the Veterans Bureau and the Justice Department, and the posthumous revelation of an extramarital affair.

Raised in Marion, Ohio, Harding took hold of the small town’s newspaper and turned it into a success. Showing a talent for local politics, he rose quickly to the U.S. Senate. His presidential campaign slogan, “America’s present need is not heroics but healing, not nostrums but normalcy,” gave voice to a public exhausted by the intense politics following World War I.

Once elected, he pushed for legislation limiting the number of immigrants; set high tariffs to relieve the farm crisis after the war; persuaded Congress to adopt unified federal budget creation; and reduced income taxes and the national debt, before dying unexpectedly in 1923.

In this wise and compelling biography, John W. Dean recovers the truths and explodes the myths surrounding our twenty-ninth president’s tarnished legacy. 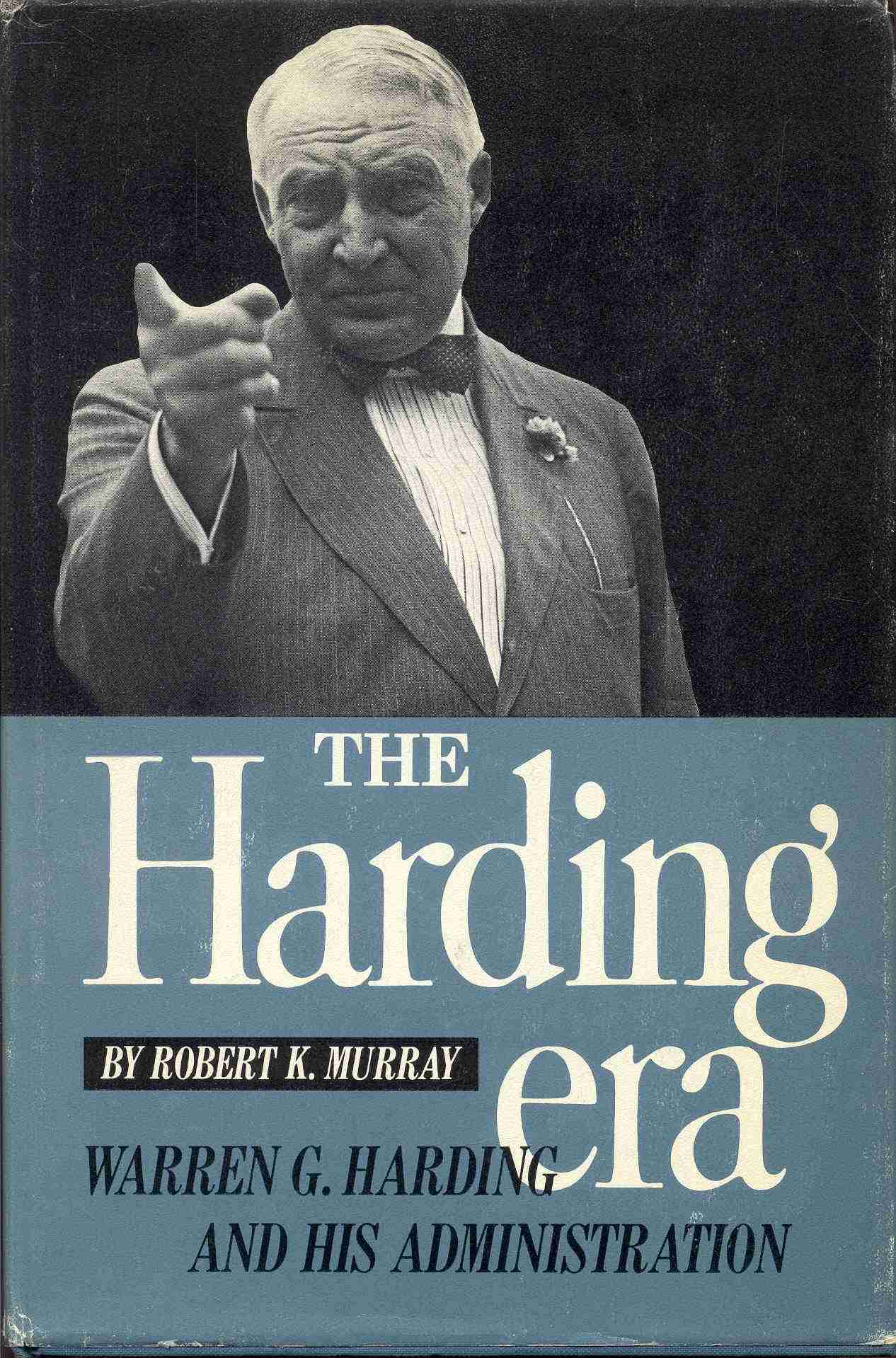 The 1920s challenged the historian and the general reader with the controversial and misunderstood figure of Warren G. Harding, president from 1921 until his death in 1923. Professor Murray re-examines and re-evaluates Harding’s nomination, election, and presidency in the light of newly available materials, especially the Harding Papers.

He demonstrates that Harding was not a bumbling nonentity as heretofore pictured and that his administration was surprisingly successful in solving its immediate problems. Inheriting domestic and international chaos, the administration engineered an efficient transition from the postwar turmoil of the late Wilson years to a time of prosperity under Coolidge. Significantly also, it established the basic outlines of Republican party policy for the rest of the decade.

Harding’s failure, the author concludes, was not in the nature of his administration but in himself and his friends. His own flaws, coupled with the corrupt activity of such associates as Forbes, Miller, and Fall, tipped the scales in the public’s eyes against his administration’s achievements. In the process, many persistent myths were created. Now, in this book, the myths are analyzed and, wherever necessary, dispelled. 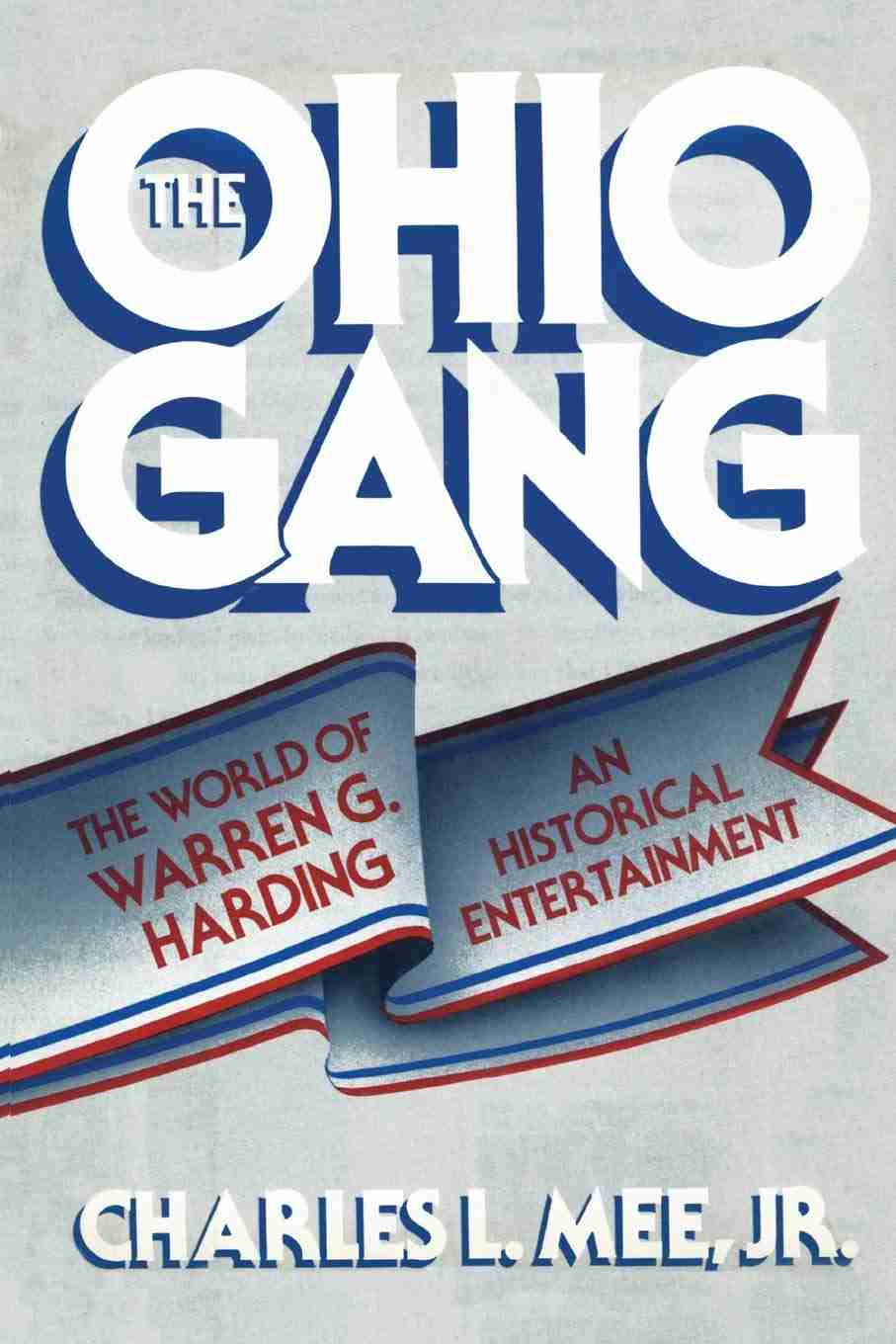 When Warren G. Harding was elected president in 1920, he brought to Washington some of his political chums from Ohio. They played poker; they sold illegal liquor permits, pardons, and paroles. They sold fixes in the Justice Department and transported contraband across state lines. They sold naval oil reserves at Teapot Dome and sheets out of Army warehouses.

The Ohio Gang, an historical entertainment peopled with the characters of the day, follows Harding and his cronies from their Ohio childhoods to the smoke-filled rooms of the Republican convention and on to the White House. We meet Henry Daugherty, the attorney general with the disconcerting eyes; Jess Smith, tall and pigeon-toed; Nan Britton, the teenage girl who fell in love with Harding’s campaign posters and who later became his mistress and mother to his illegitimate daughter; and America’s first lady, the Duchess.

Following the antics of the president and his administration, this gem among books on Warren Harding concludes with the president’s whistle-stop tour of the country – his final, despairing attempt to keep his presidency from coming undone. 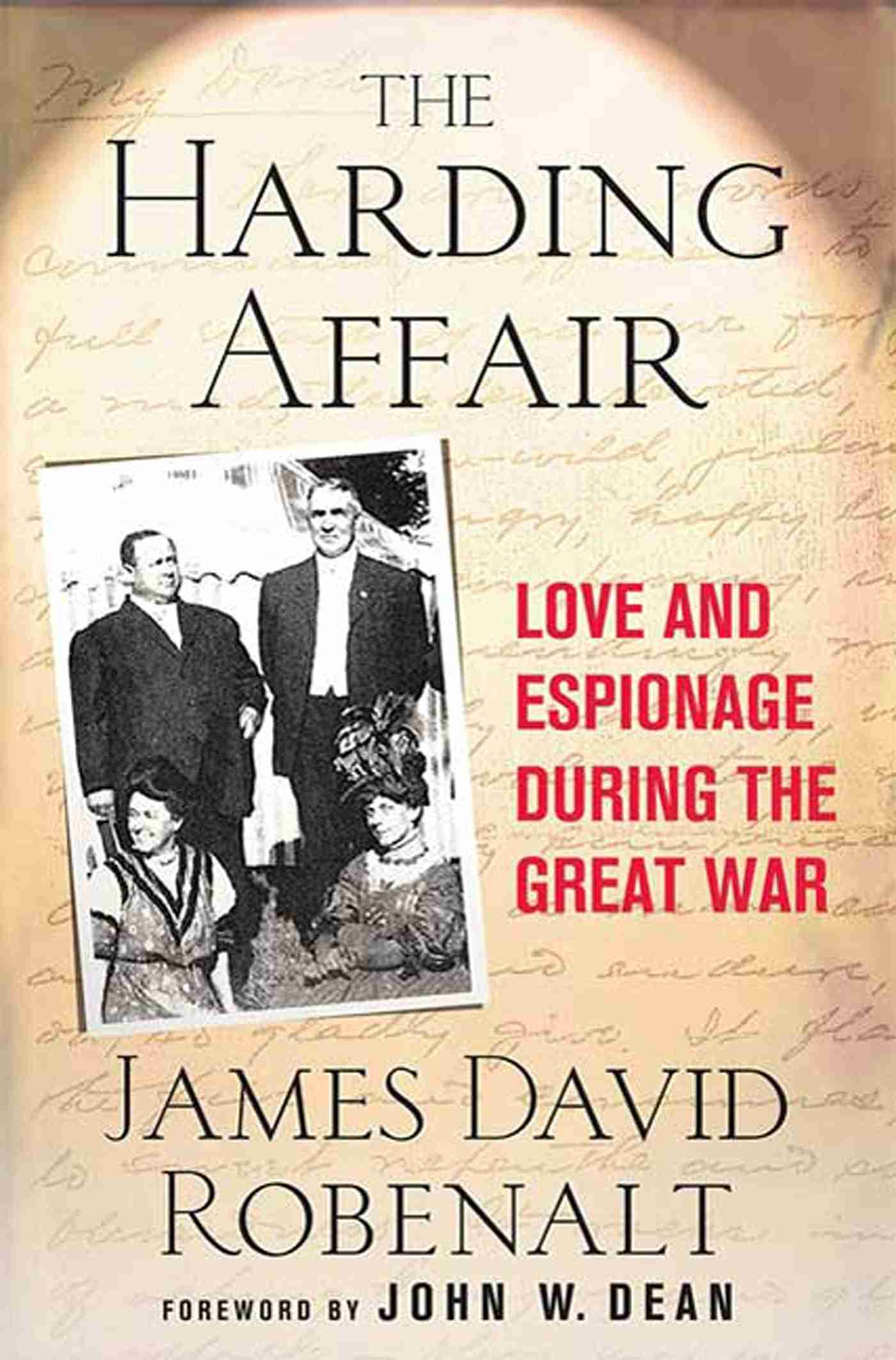 Warren Harding fell in love with his beautiful neighbor, Carrie Phillips, in the summer of 1905, almost a decade before he was elected a United States Senator and fifteen years before he became the 29th President of the United States. When the two lovers started their long-term and torrid affair, neither of them could have foreseen that their relationship would play out against one of the greatest wars in world history – the First World War.

Harding would become a Senator with the power to vote for war; Mrs. Phillips and her daughter would become German agents, spying on a U.S. training camp on Long Island in the hopes of gauging for the Germans the pace of mobilization of the U.S. Army for entry into the battlefields in France.

Based on over 800 pages of correspondence discovered in the 1960s but under seal ever since in the Library of Congress, The Harding Affair will tell the unknown stories of Harding as a powerful Senator and his personal and political life, including his complicated romance with Mrs. Phillips. The book will also explore the reasons for the entry of the United States into the European conflict and explain why so many Americans at the time supported Germany, even after the U.S. became involved in the spring of 1917. 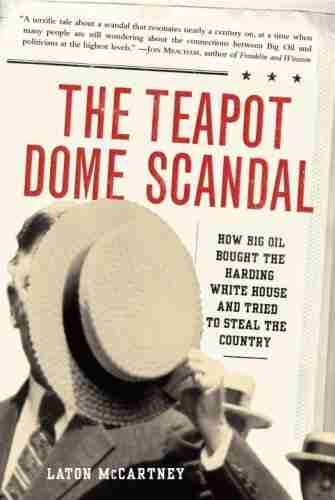 Mix hundreds of millions of dollars in petroleum reserves; rapacious oil barons and crooked politicians; under-the-table payoffs; murder, suicide, and blackmail; White House cronyism; and the excesses of the Jazz Age. The result: the granddaddy of all American political scandals, Teapot Dome.

In The Teapot Dome Scandal, acclaimed author Laton McCartney tells the amazing, complex, and at times ribald story of how Big Oil handpicked Warren G. Harding, an obscure Ohio senator, to serve as our twenty-third president. Harding and his so-called “oil cabinet” made it possible for the oilmen to secure vast oil reserves that had been set aside for use by the U.S. Navy. In exchange, the oilmen paid off senior government officials, bribed newspaper publishers, and covered the GOP campaign debt.

When news of the scandal finally emerged, the consequences were disastrous for the nation and for the principles in the plot to bilk the taxpayers: Harding’s administration was hamstrung; Americans’ confidence in their government plummeted; Secretary of the Interior Albert Fall was indicted, convicted, and incarcerated; and others implicated in the affair suffered similarly dire fates.

Stonewalling by members of Harding’s circle kept a lid on the story – witnesses developed “faulty” memories or fled the country, and important documents went missing – but contemporary records newly made available to McCartney reveal a shocking, revelatory picture of just how far-reaching the affair was, how high the stakes, and how powerful the conspirators.

The Shadow of Blooming Grove by Francis Russell 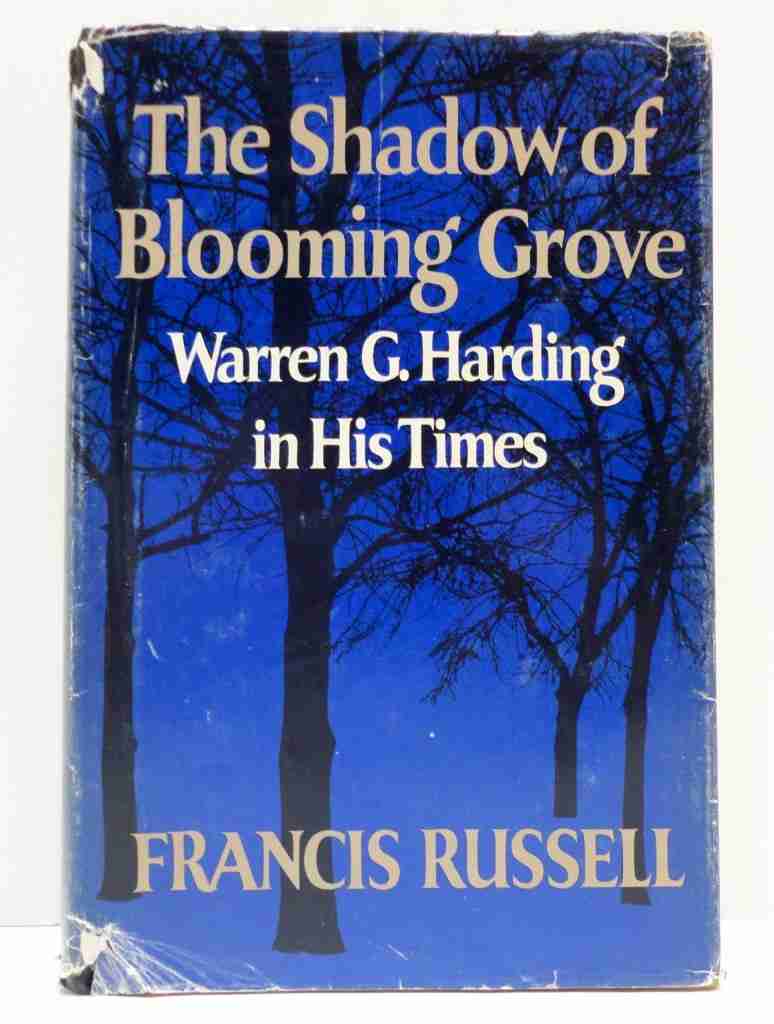 This biography of the President who became last in the hearts of his countrymen chronicles a fantastic era in American history and provides a remarkable portrait, both comic and oddly touching, of the affable, goodhearted mediocrity who was everybody’s last choice at the Republican convention of 1920. 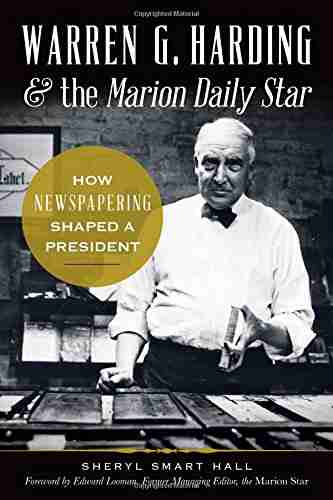 This enlightening addition to the ever-growing index of books on Warren Harding offers a unique approach to his story, presenting him as he saw himself: as a newspaperman. His political successes were based on the thinking of a newspaper editor – balancing all of the facets of an issue, examining the facts, and weighing the effect on the constituents.

Even his approach to balancing the federal budget was built on early experience at his small, struggling newspaper, where his motto was: all paid in, all paid out, books even. The only member of the Fourth Estate to enter the White House, Harding found his voice through the pages of the Marion Daily Star. Author Sheryl Smart Hall offers an intimate view of the man, often as seen through the eyes of those who knew him best – his co-workers at the “Star.” 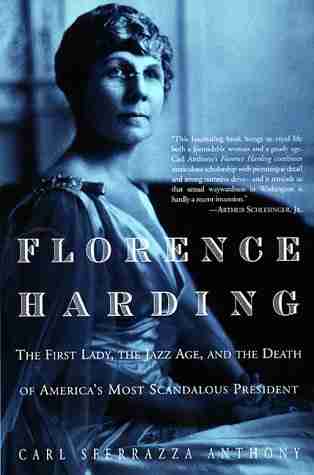 Deeply researched and richly told, Florence Harding reveals the never-before-told story of First Lady Florence Harding’s phenomenal rise to power. The daughter of an abusive father in small-town Ohio, mother at a young age to an illegitimate child, Florence Harding saw her escape in Warren G. Harding, and became the driving force behind his ascent to one of the most scandal-ridden presidencies in United States history.

Preeminent First Ladies biographer Carl Sferrazza Anthony not only captures the drama of Florence Harding’s personality, but he uses the White House to bring to life Jazz Age America – a world of speakeasies and Miss America, Babe Ruth, Al Jolson, and the rise of Hollywood. He shows how Florence’s friendship with Evalyn McLean, the morphine-addicted owner of the Hope Diamond and The Washington Post was one of the defining bonds in her public life. 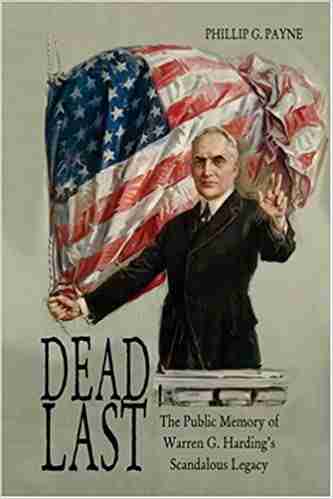 By examining the public memory of Harding, Phillip G. Payne offers the first significant reinterpretation of his presidency in a generation. Rather than repeating the old stories, Payne examines the contexts and continued meaning of the Harding scandals for various constituencies. He explores such topics as Harding’s importance as a midwestern small-town booster, his rumored black ancestry, the role of various biographers in shaping his early image, the tension between public memory and academic history, and, finally, his status as an icon of presidential failure in contemporary political debates.

Harding was a popular president and was widely mourned when he died in office in 1923; but with his death began the construction of his public memory and his fall from political grace.

1920: The Year of the Six Presidents by David Pietrusza 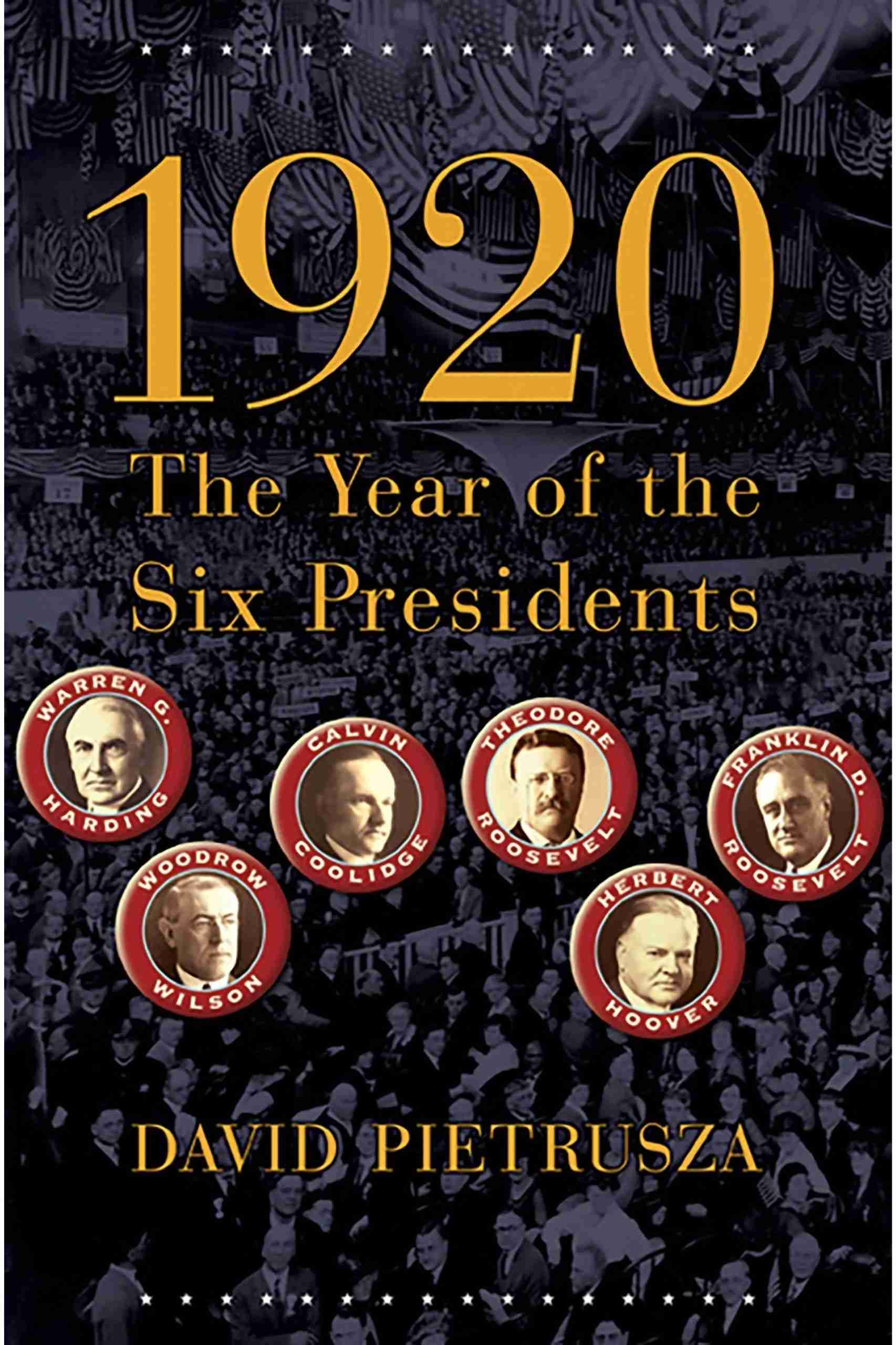 The presidential election of 1920 was one of the most dramatic ever. For the only time in the nation’s history, six once-and-future presidents hoped to end up in the White House: Woodrow Wilson, Warren G. Harding, Calvin Coolidge, Franklin Delano Roosevelt, Herbert Hoover, and Theodore Roosevelt.

It was an election that saw unprecedented levels of publicity – the Republicans outspent the Democrats by 4 to 1 – and it was the first to garner extensive newspaper and newsreel coverage. It was also the first election in which women could vote. Meanwhile, the 1920 census showed that America had become an urban nation – automobiles, mass production, chain stores, and easy credit were transforming the economy and America was limbering up for the most spectacular decade of its history, the roaring ’20s.

If you enjoyed this guide to essential books on Warren Harding, be sure to check out our list of The 10 Best Books on President Woodrow Wilson!