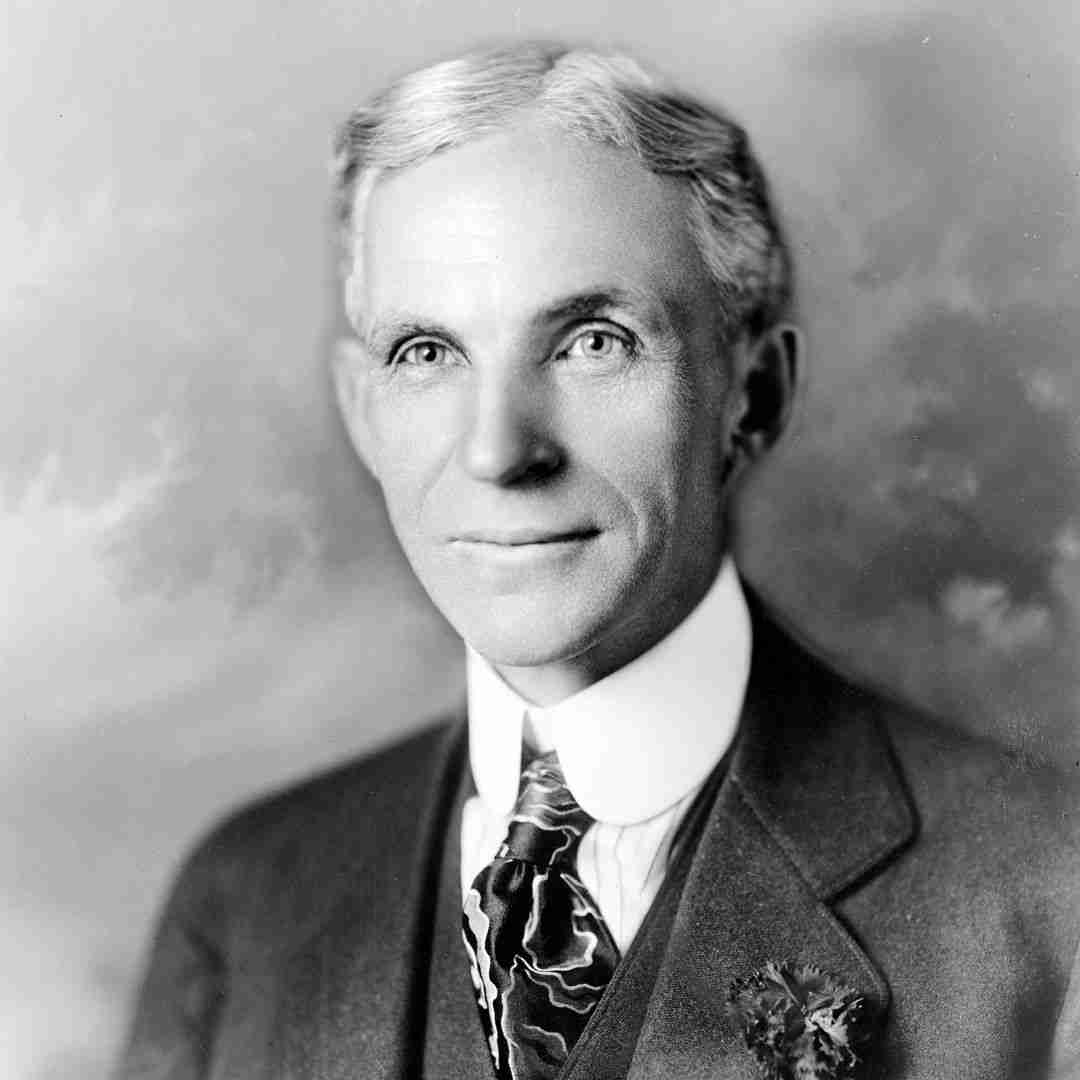 There are countless books on Henry Ford, and it comes with good reason, aside from founding the Ford Motor Company, he developed the assembly line technique of mass production. By creating the first automobile that middle-class Americans could afford, he converted the automobile from an expensive curiosity into an accessible conveyance that profoundly impacted the landscape of the 20th century.

“If money is your hope for independence, you will never have it,” Ford remarked. “The only real security that a man can have in this world is a reserve of knowledge, experience, and ability.”

In order to get to the bottom of what inspired one of history’s most consequential figures to the heights of societal contribution, we’ve compiled a list of the 10 best books on Henry Ford.

I Invented the Modern Age by Richard Snow 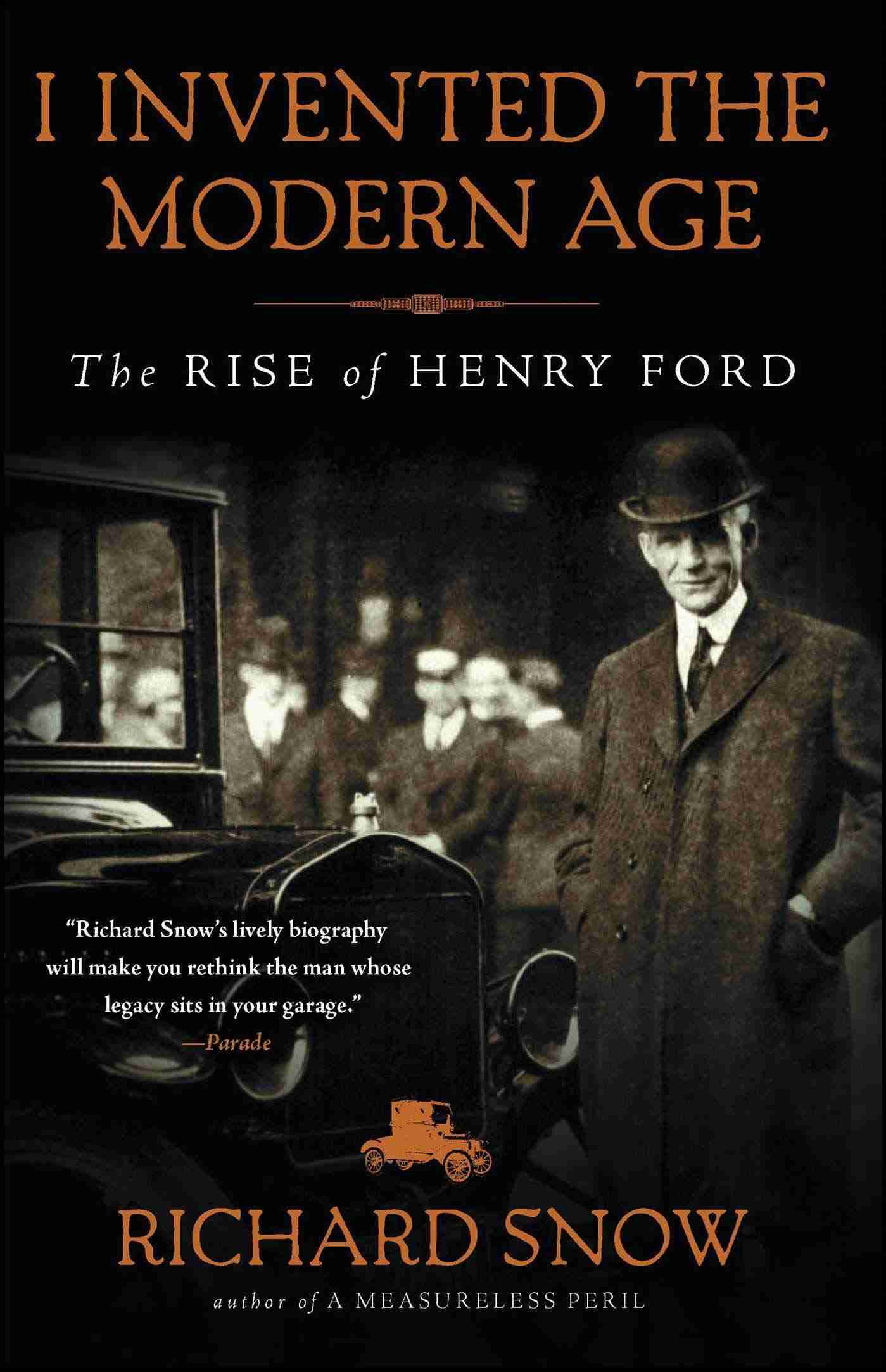 Every century or so, our republic has been remade by a new technology: 170 years ago the railroad changed Americans’ conception of space and time; in our era, the microprocessor revolutionized how humans communicate. But in the early twentieth century the agent of creative destruction was the gasoline engine, as put to work by an unknown and relentlessly industrious young man named Henry Ford. Born the same year as the battle of Gettysburg, Ford died two years after the atomic bombs fell, and his life personified the tremendous technological changes achieved in that span.

Growing up as a Michigan farm boy with a bone-deep loathing of farming, Ford intuitively saw the advantages of internal combustion. Resourceful and fearless, he built his first gasoline engine out of scavenged industrial scraps. It was the size of a sewing machine. From there, scene by scene, Richard Snow vividly shows Ford using his innate mechanical abilities, hard work, and radical imagination as he transformed American industry.

In many ways, of course, Ford’s story is well known; in many more ways, it is not. Snow masterfully weaves together a fascinating narrative of Ford’s rise to fame through his greatest invention, the Model T. When Ford first unveiled this car, it took twelve and a half hours to build one. A little more than a decade later, it took exactly one minute. In making his car so quickly and so cheaply that his own workers could easily afford it, Ford created the cycle of consumerism that we still inhabit.

The People’s Tycoon by Steven Watts 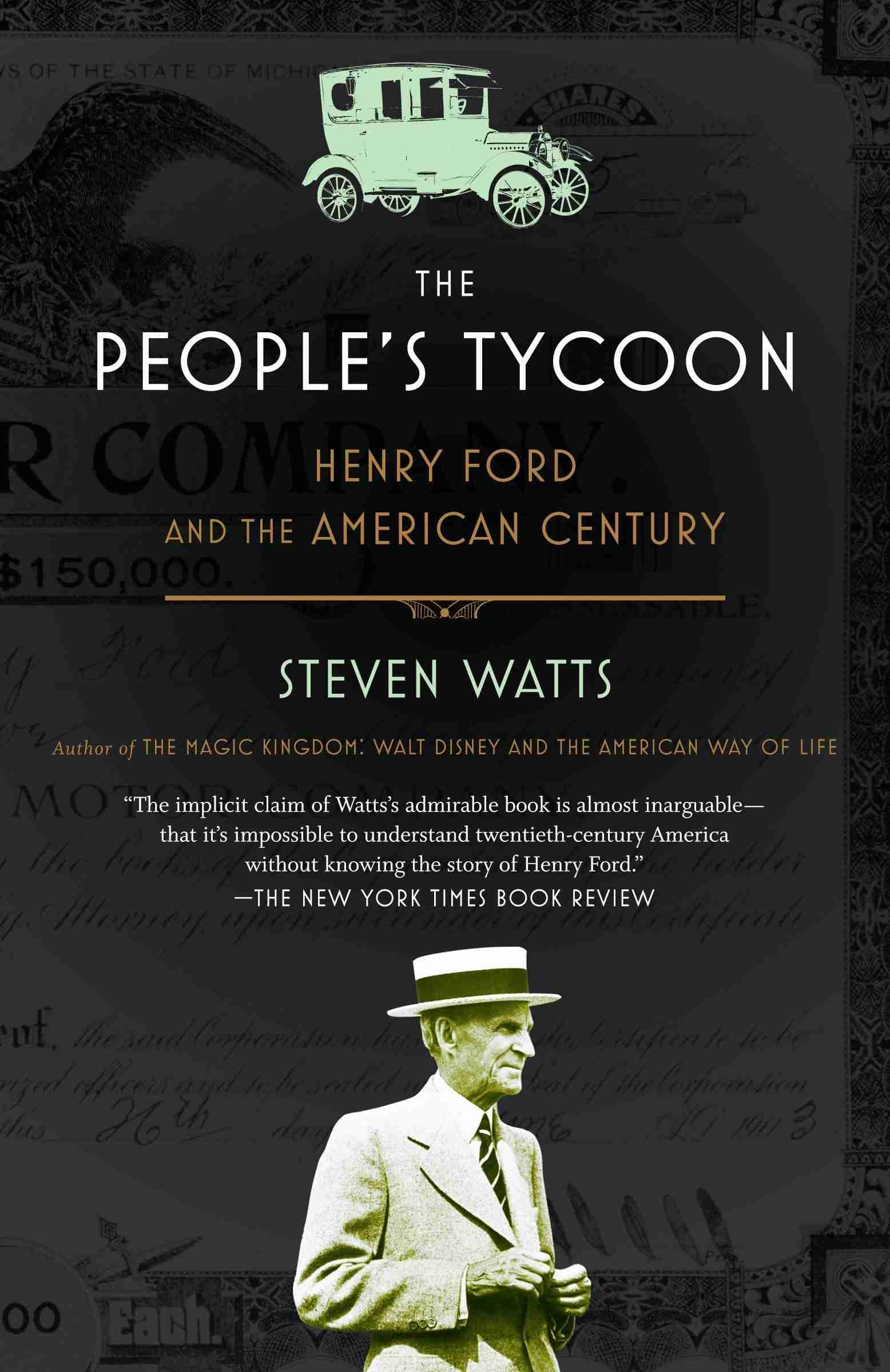 How a Michigan farm boy became the richest man in America is a classic, almost mythic tale, but never before has Henry Ford’s outsized genius been brought to life so vividly as it is in this engaging and superbly researched biography.

The real Henry Ford was a tangle of contradictions. He set off the consumer revolution by producing a car affordable to the masses, all the while lamenting the moral toll exacted by consumerism. He believed in giving his workers a living wage, though he was entirely opposed to union labor. He had a warm and loving relationship with his wife, but sired a son with another woman. A rabid anti-Semite, he nonetheless embraced African American workers in the era of Jim Crow.

Uncovering the man behind the myth, situating his achievements and their attendant controversies firmly within the context of early twentieth-century America, Watts has given us a comprehensive, illuminating, and fascinating biography of one of America’s first mass-culture celebrities. 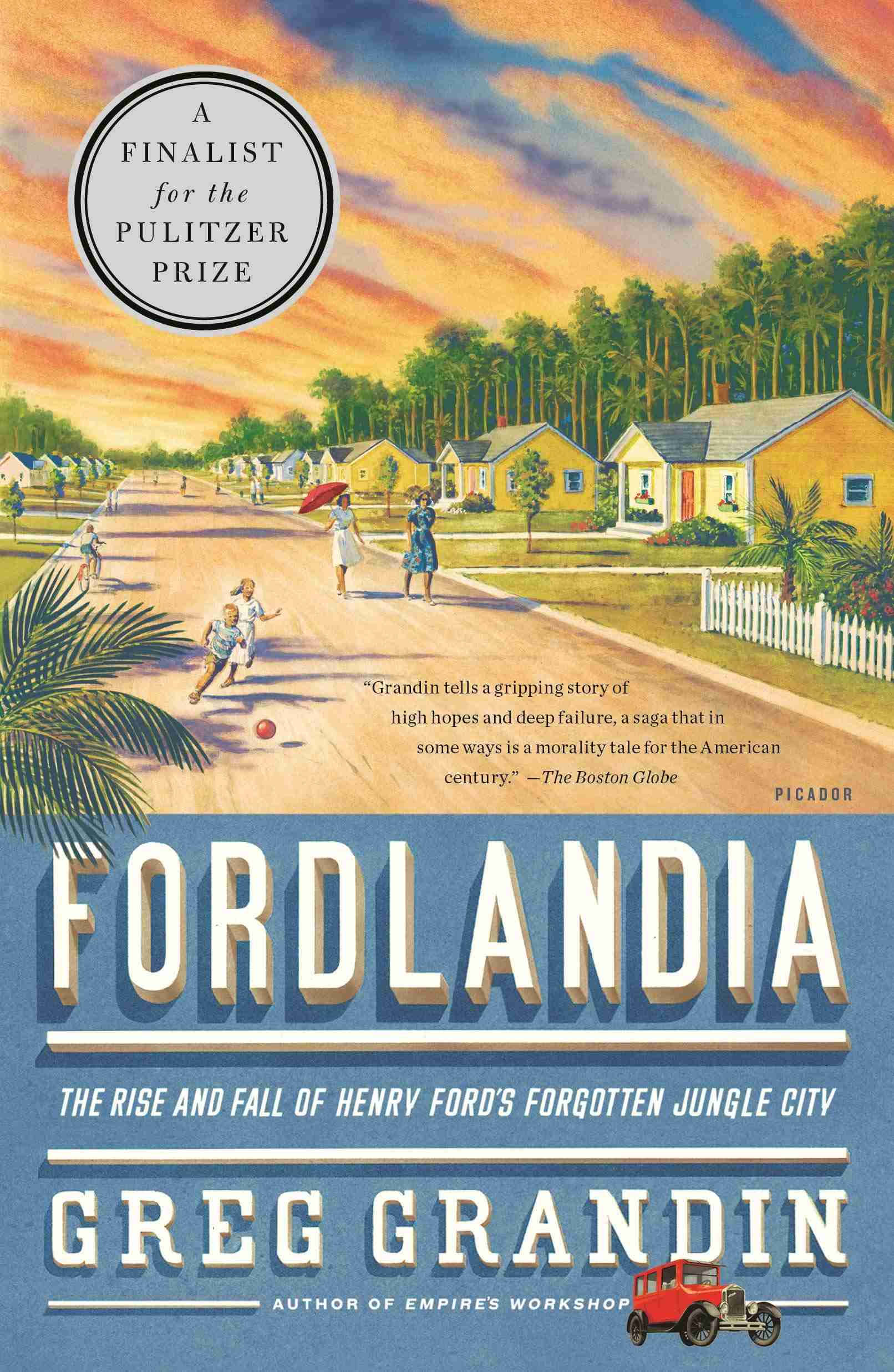 In 1927, Henry Ford, the richest man in the world, bought a tract of land twice the size of Delaware in the Brazilian Amazon. His intention was to grow rubber, but the project rapidly evolved into a more ambitious bid to export America itself, along with its golf courses, ice-cream shops, bandstands, indoor plumbing, and Model Ts rolling down broad streets.

Fordlandia, as the settlement was called, quickly became the site of an epic clash. On one side was the car magnate, lean, austere, the man who reduced industrial production to its simplest motions; on the other, the Amazon, lush, extravagant, the most complex ecological system on the planet. Ford’s early success in imposing time clocks and square dances on the jungle soon collapsed, as indigenous workers, rejecting his midwestern Puritanism, turned the place into a ribald tropical boomtown. Fordlandia’s eventual demise as a rubber plantation foreshadowed the practices that today are laying waste to the rain forest.

More than a parable of one man’s arrogant attempt to force his will on the natural world, Fordlandia depicts a desperate quest to salvage the bygone America that the Ford factory system did much to dispatch. As Greg Grandin shows in this gripping and mordantly observed history, Ford’s great delusion was not that the Amazon could be tamed but that the forces of capitalism, once released, might yet be contained.

Wheels for the World by Douglas G. Brinkley 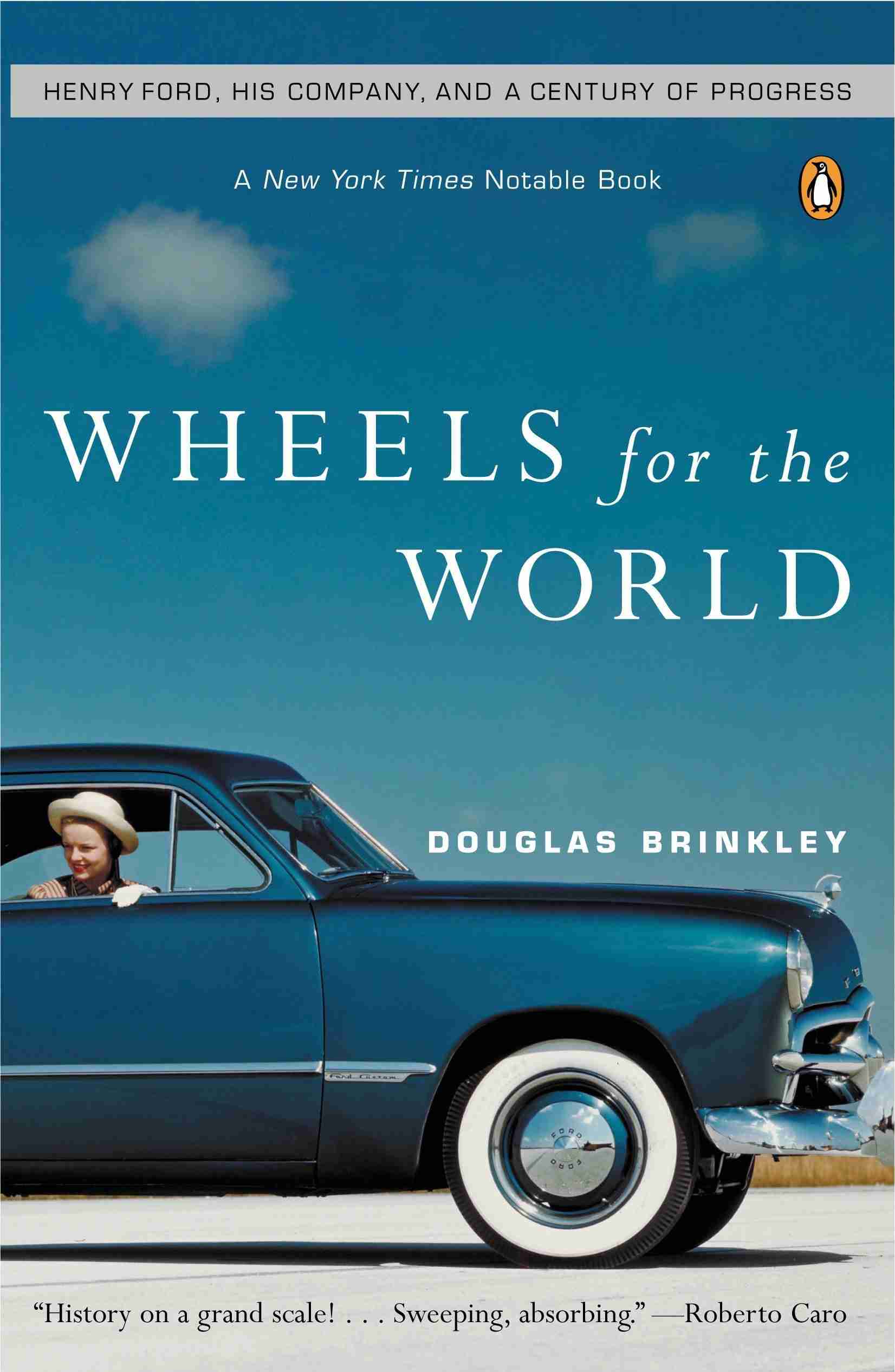 In this monumental work, one of our finest historians reveals the riveting details of Ford Motor Company’s epic achievements, from the outlandish success of the Model T and V-8 to the glory days of the Thunderbird, Mustang, and Taurus. Brilliant innovators, colorful businessmen, and clever eccentrics, as well as the three Ford factories themselves, all become characters in this gripping drama. Douglas Brinkley is a master at crafting compelling historical narratives, and this exemplary history of one of the preeminent American corporations is his finest achievement yet.

The Vagabonds by Jeff Guin 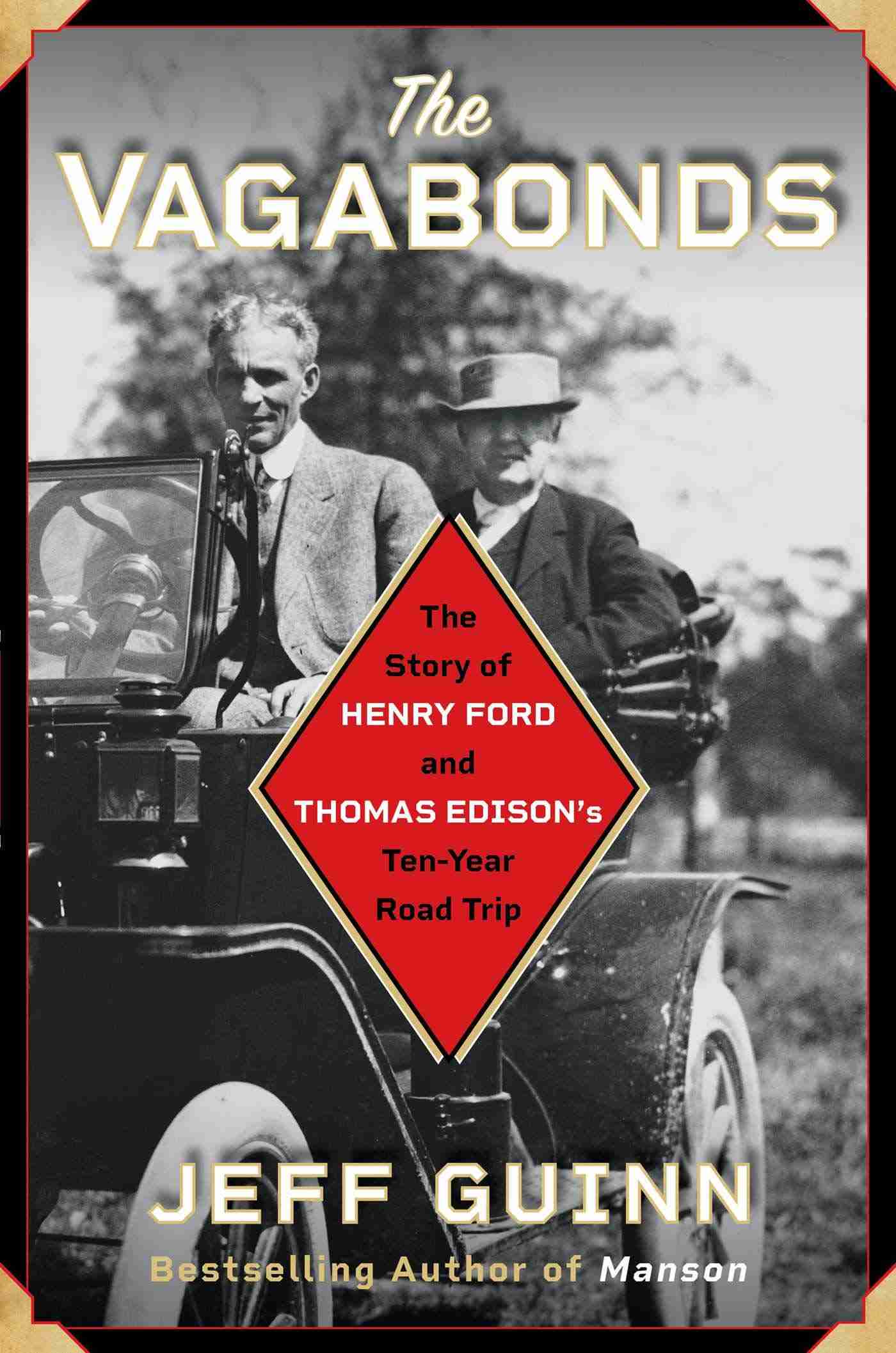 In 1914 Henry Ford and naturalist John Burroughs visited Thomas Edison in Florida and toured the Everglades. The following year Ford, Edison, and tire maker Harvey Firestone joined together on a summer camping trip and decided to call themselves the Vagabonds. They would continue their summer road trips until 1925, when they announced that their fame made it too difficult for them to carry on.

Although the Vagabonds traveled with an entourage of chefs, butlers, and others, this elite fraternity also had a serious purpose: to examine the conditions of America’s roadways and improve the practicality of automobile travel. Cars were unreliable and the roads were even worse. But newspaper coverage of these trips was extensive, and as cars and roads improved, the summer trip by automobile soon became a desired element of American life.

The Vagabonds is “a portrait of America’s burgeoning love affair with the automobile” (NPR) but it also sheds light on the important relationship between the older Edison and the younger Ford, who once worked for the famous inventor. The road trips made the automobile ubiquitous and magnified Ford’s reputation, even as Edison’s diminished.

My Life and Work by Henry Ford 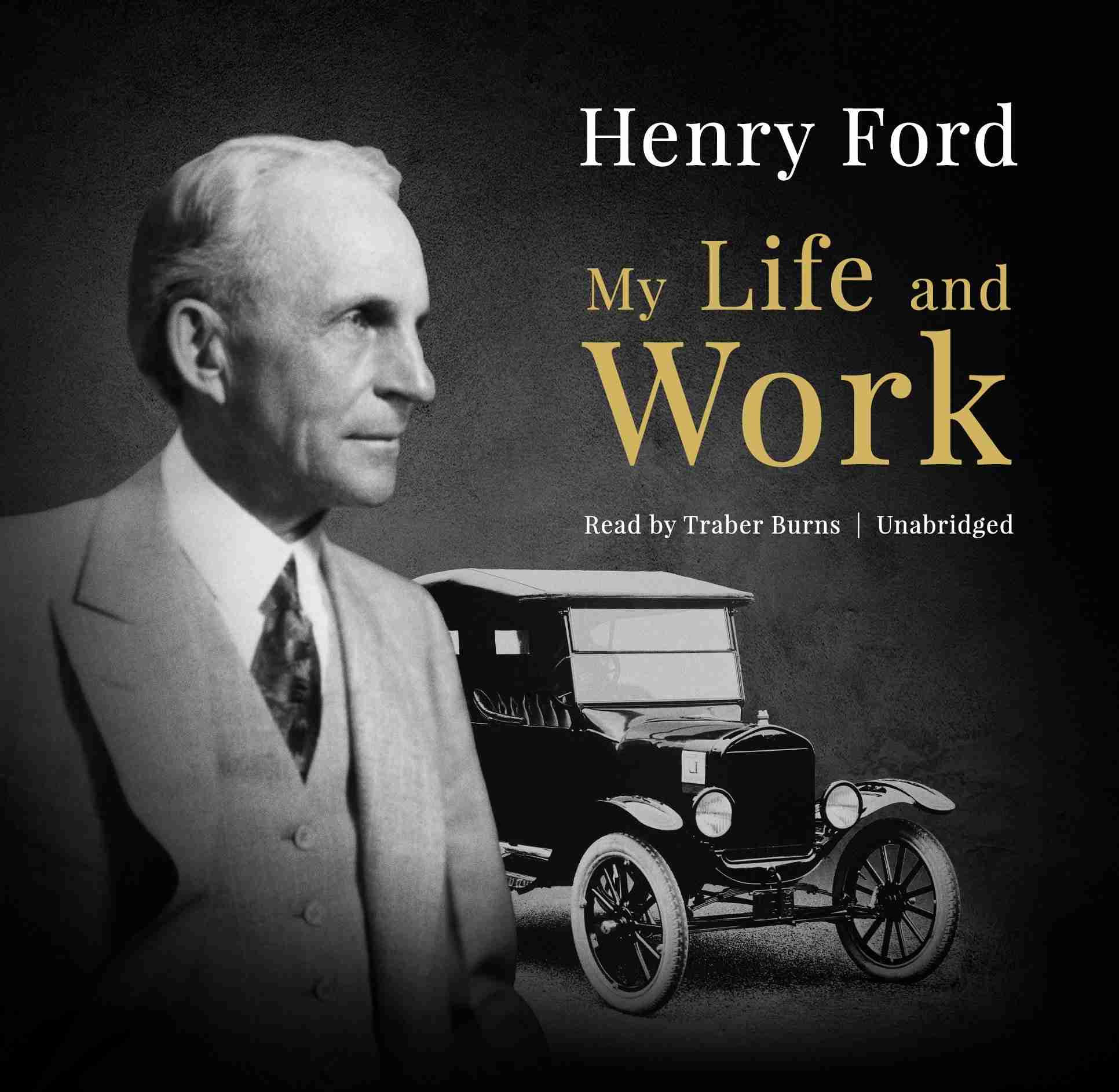 Widely available via Audible audiobook, this is the original autobiography of Henry Ford, founder of the Ford Motor Company. It was originally published in 1922. The autobiography details how Henry Ford started out, how he got into business, the strategies he used to become a successful and immensely wealthy businessman, and how he built a company to last.

The book that has inspired entrepreneurs for generations, not only is My Life and Work by Henry Ford a memoir of an American icon but it also shows the spirit that built America. Written in 1922, this work provides a unique insight into the observations, ideas, and problem-solving skills of this remarkable man.

The Fords: An American Epic by Peter Collier 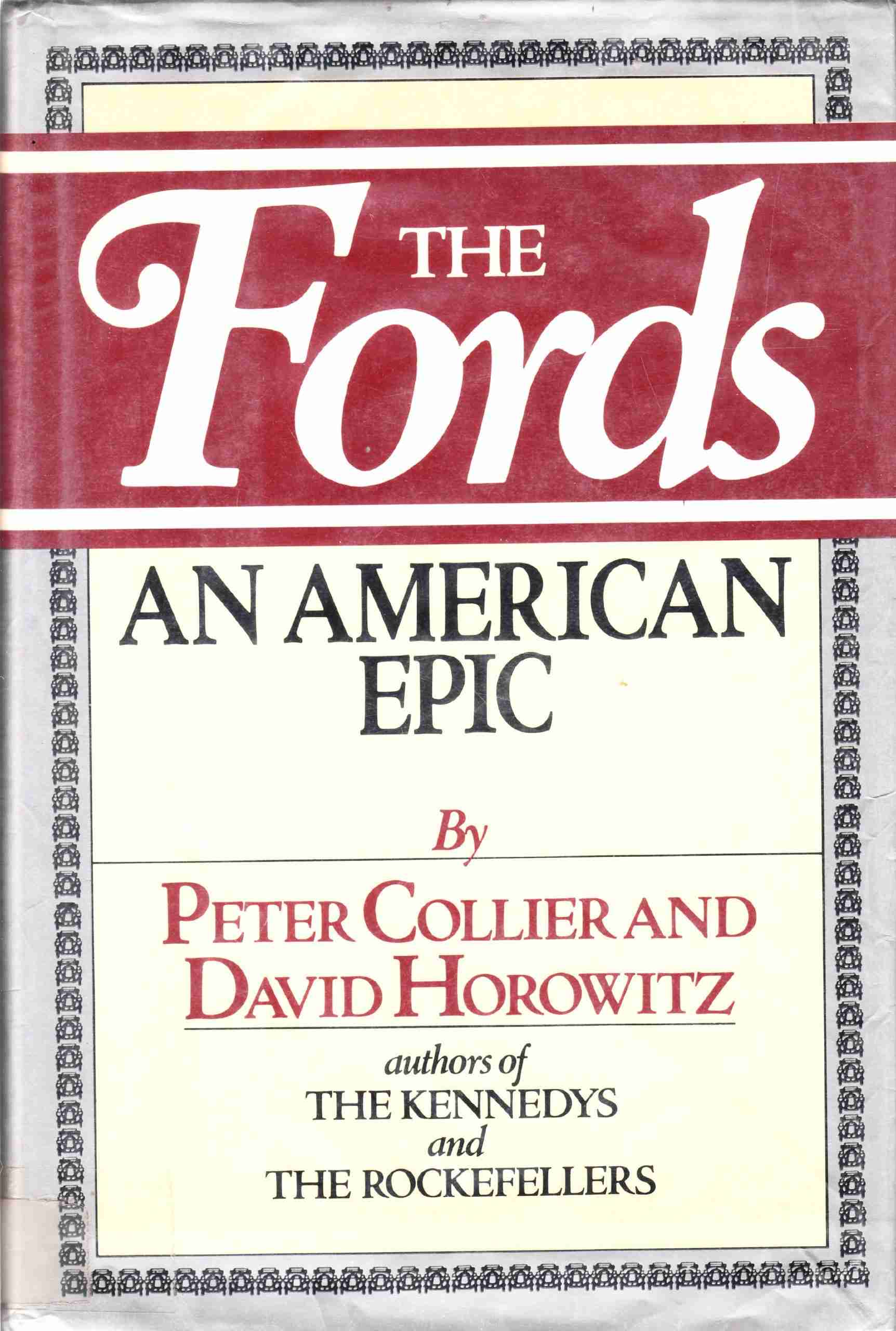 In The Fords: An American Epic, Peter Collier and David Horowitz tell the riveting story of three generations of Fords, a dramatic story of conflict between fathers and sons played out against the backdrop of America’s greatest industrial empire.

The story begins with the first Henry Ford, the mechanical wizard, tinkerer, and “mad genius” who drove the automobile into the heart of American life and conquered the world with it. An American original, by the end of his life he had become an embittered crank who so possessively loved the company he built that when his son, Edsel, tried to change it to suit the changing times, Henry destroyed him. It was left to Edsel’s son Henry II to avenge him and save the Ford Motor Company in the postwar world.

From the details of the first Henry’s illicit affair and illegitimate son, to the life and loves of “Hank the Deuce” and his celebrated feud with Lee Iacocca, this is an engrossing account of a vital chapter in American history. The authors have added new material to this classic work, showing how Henry II’s line lost out to the line of his brother William Clay Ford in the quest to control this most American of companies in the twenty-first century. 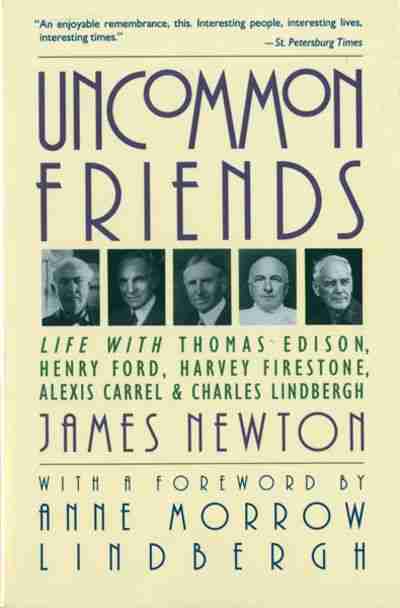 James Newton’s Uncommon Friends is “a delightful portrayal of five great men who shared special friendships and common visions” (Booklist). Thomas Edison, Henry Ford, Harvey Firestone, Alexis Carrel, and Charles Lindbergh were twentieth-century giants known personally by very few. In this compelling memoir, James Newton recalls a lifetime of friendship with all of them – a friendship that began when he was only twenty years old and head of development of Edison Park in Fort Meyers, Florida. Based on Newton’s diaries, recollections, and extensive correspondence, this gem among books on Henry Ford is a unique opportunity to share a view of the personal side of some legendary historical figures.

The Public Image of Henry Ford by David L. Lewis 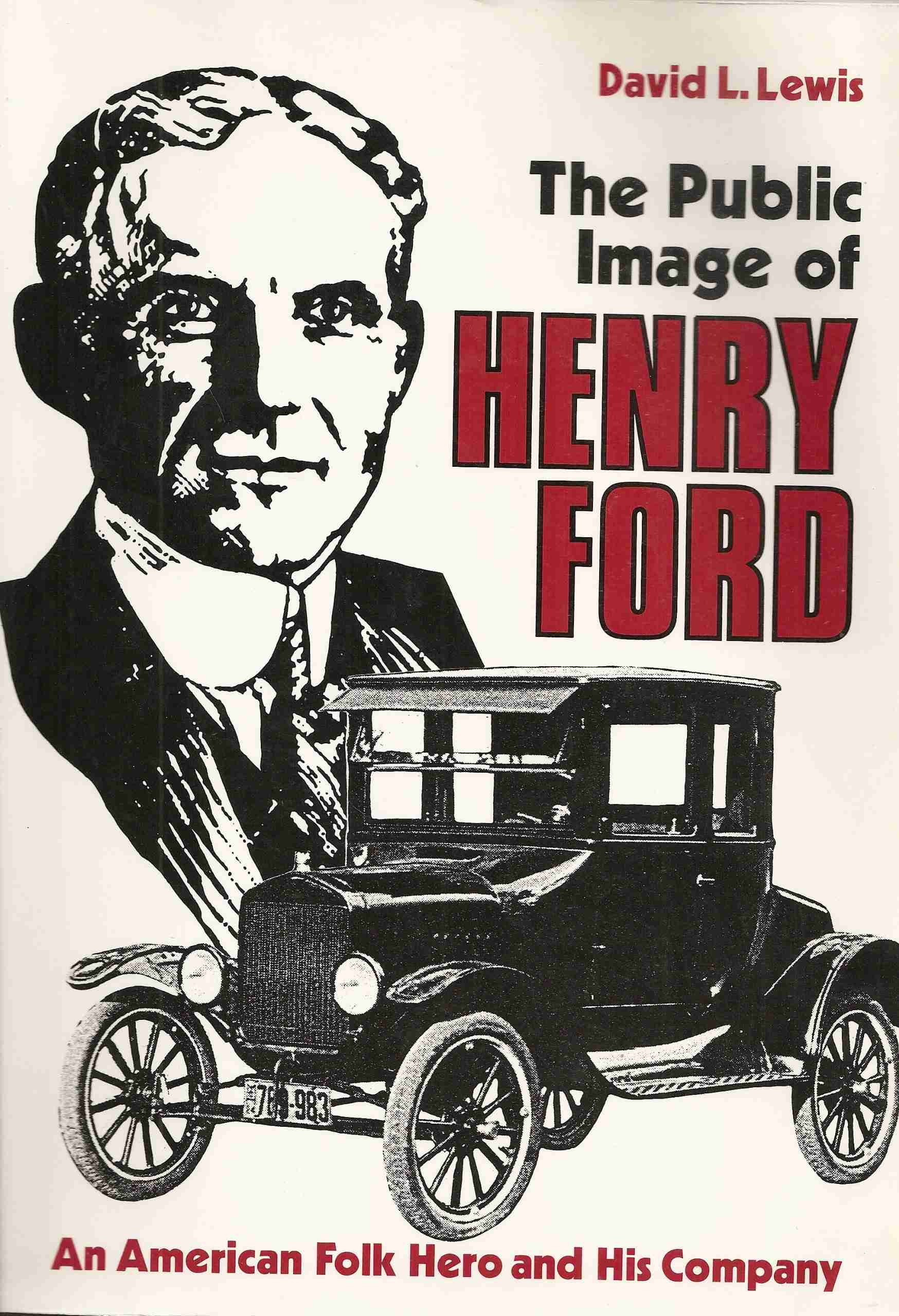 Skillful journalism and meticulous scholarship are combined in the full-bodied portrait of that enigmatic folk hero, Henry Ford, and of the company he built from scratch. Writing with verve and objectivity, David Lewis focuses on the fame, popularity, and influence of America’s most unconventional businessman and traces the history of public relations and advertising within Ford Motor Company and the automobile industry.

Henry Ford and the Jews by Neil Baldwin

This necessary installment among books on Henry Ford shows how he promoted his anti-Semitic views in The Dearborn Independent and other publications and examines the response of the Jewish community in America as well as Ford’s impact on the spread of anti-Semitism in Europe before World War II.

If you enjoyed this guide to the best books on Henry Ford, be sure to check out our list of 20 Inspirational Books Jeff Bezos recommends reading!