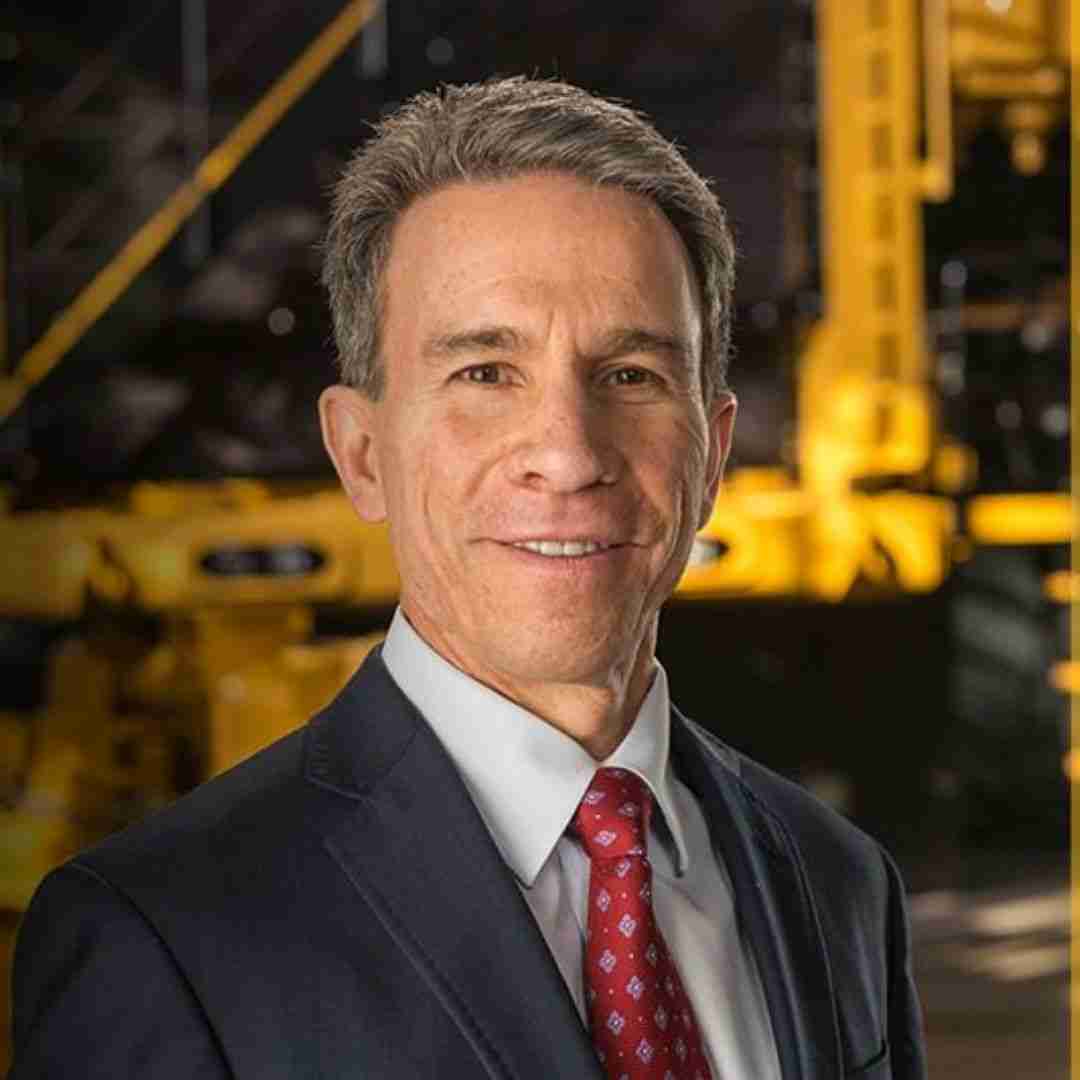 Long before Caterpillar CEO Jim Umpleby ascended to the heights of corporate America, he was a teenager growing up in Highland Indiana – a small town of about 22,300 residents near the shores of Lake Michigan, on the suburban fringes of the Chicago metro area.

He served as student body president and, being the first in his family to ever graduate from college, earned his degree in chemical engineering in 1980.

During Umpleby’s final days on campus, none other than Don Ings, a Rose-Hulman alumnus and the plant manager of San Diego-based Solar Turbines, was at the university seeking prospective engineers. The two rather fortuitously bumped into each other and after an impromptu 15-minute conversation, Umpleby walked away eager for the kind of job where he could make a difference and expand his skills.

Ings ultimately decided to take a chance on the fresh college grad, giving him an opportunity to work at one of the world’s leading manufacturers of industrial gas turbine systems.

For contextual purposes, a gas turbine engine is a type of internal combustion engine. Essentially, the engine can be viewed as an energy conversion device that converts energy stored in the fuel to useful mechanical energy in the form of rotational power. This energy can then, for example, drive a generator that produces the electrical energy that moves along power lines to homes and businesses.

The Career of Jim Umpleby

Jim Umpleby started out as an associate engineer at Solar Turbines in 1980, the company shortly thereafter became a Caterpillar subsidiary in 1981.

Since then, he’s held a variety of positions throughout his career, including roles in engineering, manufacturing, marketing, sales, and services. He notably spent six years in Southeast Asia on assignments in Malaysia and Singapore, which he considers a rewarding experience that taught him to view the world from a different perspective.

“Take some risks and try something new during the decades to come,” he said during a full-circle commencement speech for Rose-Hulman’s class of 2018. “Create a diverse path for yourself. At a minimum, you’ll learn to view the world from a different perspective. At best, you’ll discover a new role at your company or in your community where you can have a positive impact and have some fun.”

Rising Through the Ranks

With business booming, in 1994, Umpleby became the director of power systems operations and facility manager of Solar’s Kearny Mesa gas turbine packaging facility. He completed an executive leadership program at the International Institute for Management Development (IMD) in Lausanne, Switzerland, in 1996.

A year later, he was named a Solar vice president with responsibility for customer services and in 2000 was appointed Solar vice president for turbomachinery products. By 2005, Umpleby was tapped to assume responsibilities as a general manager for global services for Caterpillar, a Peoria-based assignment in Caterpillar’s product support division.

Following several more promotions to the very top of Solar Turbines, the Caterpillar board elected him group president with responsibility for Caterpillar’s energy & power systems business in 2012.

“Rapid economic growth in developing countries is driving significant demand for commodities, energy, and infrastructure,” Umpleby said as a keynote speaker at the 2013 Utica Summit, also citing that, for the first time in history, half the world’s population was living in urban settings. “Caterpillar customers are helping the world develop, CAT and our dealers are proud to provide engines, mining and construction equipment, and services to support them.”

Considering Caterpillar’s role in humanity’s push to live in ever-growing cities, he added, “we have a legacy of making the world a better place by improving standards of living through infrastructure development.” From 2013 to 2016, he led Caterpillar’s energy & transportation business segment as group president.

Though he had once ushered the company into a period of record sales, come 2016, Caterpillar’s CEO Doug Oberhelman found himself in the midst of a global commodities slump, and with no industry rebound expected in the near future, he embarked on a cost-cutting campaign featuring the trimming of 10,000 jobs, $1.5 billion in annual expenses, and up to 20 plants through 2018.

It’s beneficial to know, due to their business model boasting a diverse selection of products and services, Caterpillar enjoys three primary revenue streams separated into the following categories: construction industries, resource industries, and energy and transportation.

Decades of growing the engines business, a once low-profile division that by 2016 had established itself as Caterpillar’s most profitable, placed Umpleby at the helm of a critical segment responsible for hauling in up to two-thirds of the company’s annual operating profit and 40% of its equipment sales.

“Doug was dealt a deck of cards,” Don Ings, former Caterpillar executive, said as the announcement went public. “Jim’s going to be lucky enough that his deck of cards is going to include the upcycle [for machinery] and Caterpillar is very, very-well positioned to achieve greatness during that cycle.”

According to Forbes, the silver lining was that, excluding certain items, the company made $1.28 per share, crushing Wall Street analyst estimates of 62 cents. Revenue rose 4% to $9.82 billion, also handily beating estimates of $9.26 billion.

“There are encouraging signs, with promising quoting activity in many of the markets we serve and retail sales to users turning positive for both machines and energy & transportation for the first time in several years,” said Jim Umpleby in prepared remarks. “There continues to be uncertainty across the globe, potential for volatility in commodity prices, and weakness in key markets.”

By the end of 2017, his management team successfully implemented a new enterprise strategy focused on improving margins, expanding offerings and services, and a disciplined approach to invest more resources in areas that present the best opportunity for future profitable growth.

At the foundation of the culture reboot is the company’s long-standing code of conduct; the over-arching pillars within these “values in action” include integrity, excellence, teamwork, commitment, and sustainability.

Equally fundamental to the strategy is the Operation and Execution (O&E) Model, a powerful methodology utilized to gain a granular understanding of financial performance by product, region, and application. The O&E Model allows Caterpillar to address areas where they lack acceptable returns and invest in areas with the best opportunity for future profitable growth.

“The core components of our enterprise strategy remain the same: expand offerings, services, and operational excellence,” he said in a statement. “In 2018, this strategy took firm hold, providing momentum for our team to deliver significant results in each of these areas.”

“Combining Weir Oil & Gas’ pressure pumping and pressure control portfolio with Cat engines and transmissions will provide additional value for our customers,” said Joe Creed, Caterpillar Group President. “This acquisition is consistent with our strategy of providing our customers expanded offerings and services which will now be one of the broadest in the well service industry.”

“By prioritizing employees’ safety, health, and well-being, we remained both safe and productive as we managed through the pandemic,” Umpleby noted. “Despite the difficult environment, we achieved the best safety performance on record for the second consecutive year – a testament to our employees’ safety-first mindset.”

Caterpillar stock was trading at around $93.00 the month Jim Umpleby became chief executive, as of December 2021, a single share is valued at $206.38, over twice as much!

This rise can in part be attributed to the Infrastructure Investment and Jobs Act, a $1.2 trillion bipartisan bill recently signed into law that will rebuild America’s roads, bridges and rails, expand access to clean drinking water, ensure every American has access to high-speed internet, tackle the climate crisis, advance environmental justice, and invest in communities that have too often been left behind.

For years to come, in a multitude of ways, Caterpillar is likely to be a beneficiary of this government spending, check out CNBC’s interview with Caterpillar CEO Jim Umpleby for his thoughts on the subject:

Third-quarter 2021 earnings proved strong, with sales and revenues of $12.4 billion, a 25% increase compared with $9.9 billion in the third quarter of 2020. The increase was primarily thanks to higher sales volume, driven by higher end-user demand for equipment and services, and favorable price realization.

“Our global team continues to execute our long-term strategy for profitable growth while working to mitigate supply chain challenges as we serve our customers,” Caterpillar CEO Jim Umpleby said. “Our third-quarter results reflect higher sales and revenues across our three primary segments and in all regions.”

If you enjoyed this story on the life of Jim Umpleby, be sure to check out our biography of General Electric CEO Larry Culp!