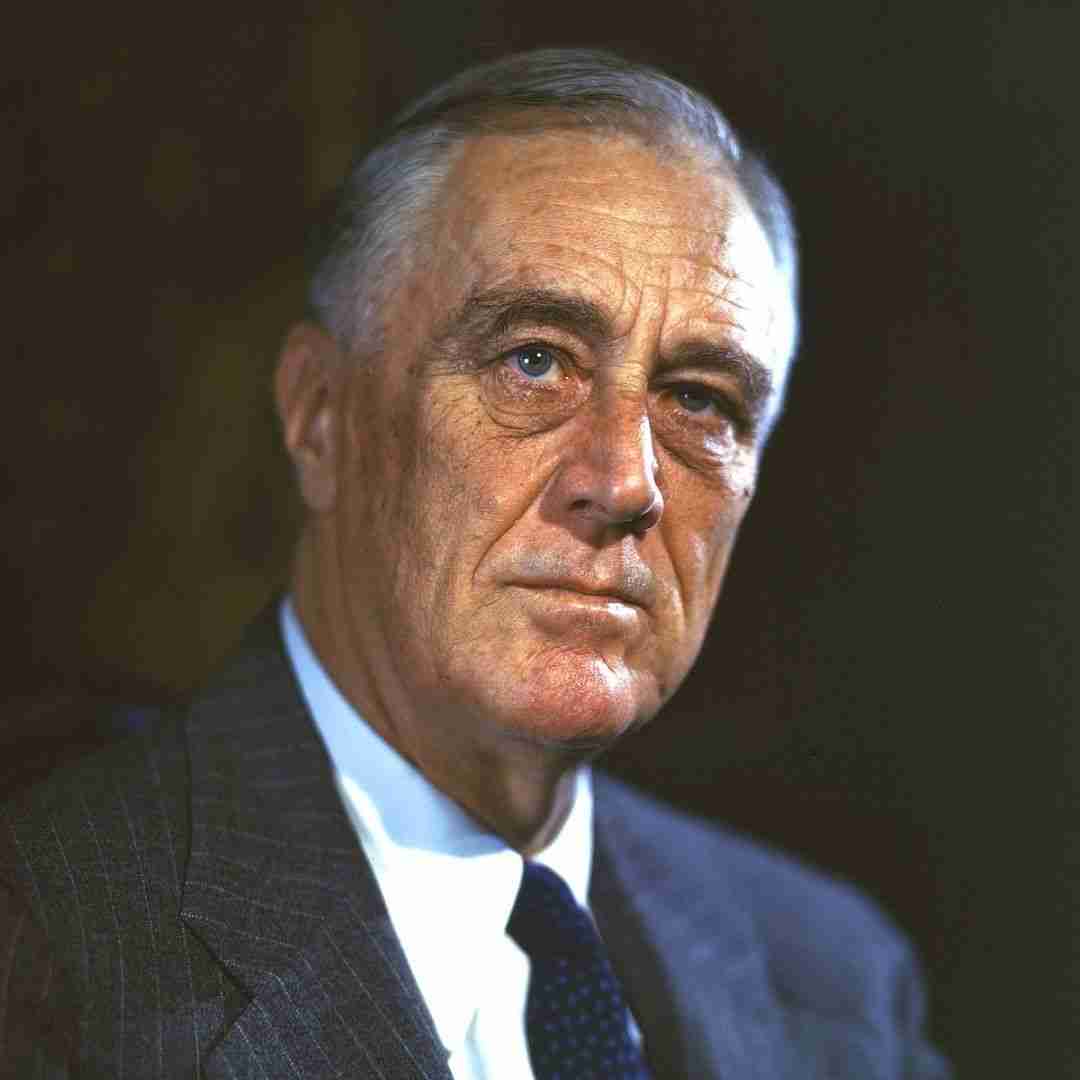 There are countless books on Franklin Roosevelt, and it comes with good reason, after all, he is widely celebrated for leading the United States out of the great depression, playing an instrumental role in bringing about the destruction of World War II’s Axis powers, and in the process, securing a global peace the likes of which mankind maybe hasn’t experienced since the dawn of civilization.

He was elected President in November 1932, to the first of four terms. The following March there were 13,000,000 unemployed, and almost every bank was closed. In his first “hundred days,” he proposed, and Congress enacted, a sweeping program to bring recovery to business and agriculture, relief to the unemployed and to those in danger of losing farms and homes, and reform, especially through the establishment of the Tennessee Valley Authority. By 1935 the Nation had achieved some measure of economic recovery.

When the Japanese attacked Pearl Harbor on December 7, 1941, Roosevelt directed the organization of America’s manpower and resources for a global war to be fought on opposing ends of the Earth’s surface. Feeling that the future peace of the world would depend upon relations between the United States and Russia, he devoted much thought to the planning of a United Nations, in which, he hoped, international difficulties could be settled.

Reading clearly played a profound role in molding Franklin Roosevelt as a person, and furthermore, this favorite educational activity of his must have had something to do with the spirited – and liberating for that matter – approach he took to life. Therefore, in order to get to the bottom of what inspired one of history’s greatest men to the heights of societal contribution, we’ve compiled a list of the 10 best books on Franklin Roosevelt. 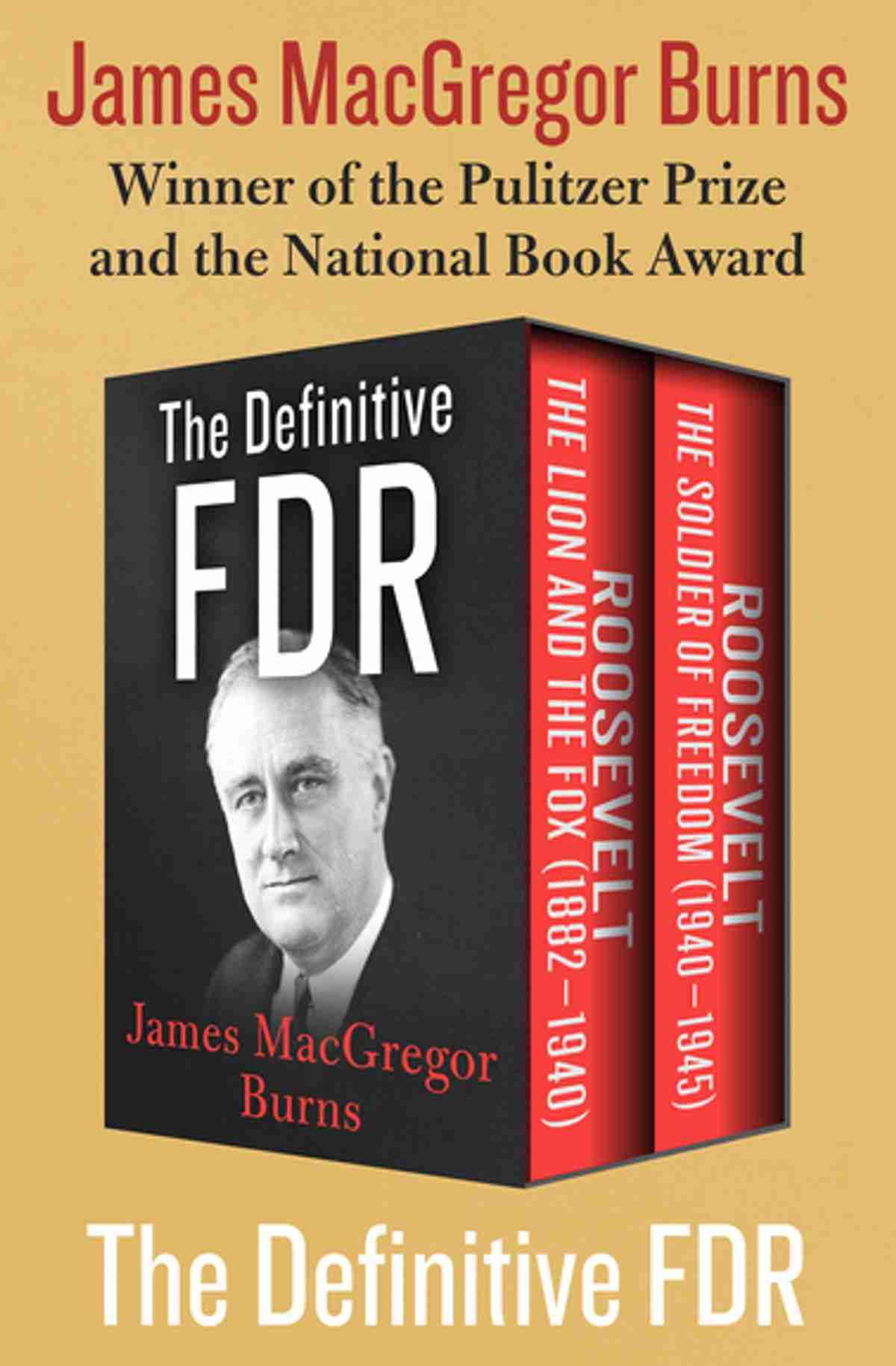 Franklin Delano Roosevelt was the longest serving president in US history, reshaping the country during the crises of the Great Depression and World War II. James MacGregor Burns’s magisterial two-volume biography tells the complete life story of the fascinating political figure who instituted the New Deal.

Roosevelt: The Lion and the Fox (1882–1940): Before his ascension to the presidency, FDR laid the groundwork for his unprecedented run with decades of canny political maneuvering and steady consolidation of power. Hailed by the New York Times as “a sensitive, shrewd, and challenging book” and by Newsweek as “a case study unmatched in American political writings,” The Lion and the Fox details Roosevelt’s youth and education, his rise to national prominence, all the way through his first two terms as president.

Roosevelt: The Soldier of Freedom (1940–1945): The Pulitzer Prize and National Book Award–winning history of FDR’s final years examines the president’s skillful wartime leadership as well as his vision for postwar peace. Acclaimed by William Shirer as “the definitive book on Roosevelt in the war years,” and by bestselling author Barbara Tuchman as “engrossing, informative, endlessly readable,” The Soldier of Freedom is a moving profile of a leader gifted with rare political talent in an era of extraordinary challenges. 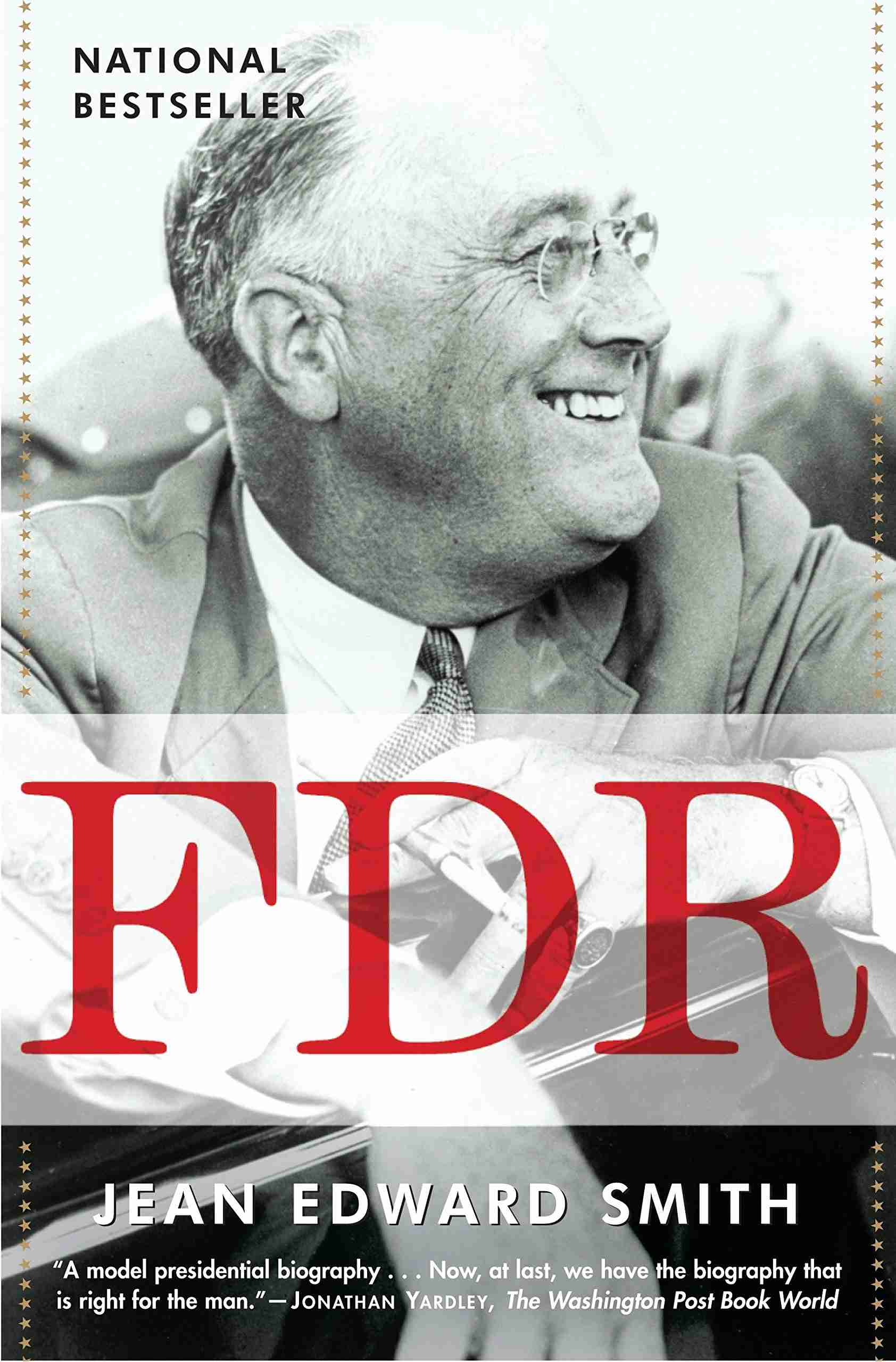 One of today’s premier biographers has written a modern, comprehensive, indeed ultimate book on the epic life of Franklin Delano Roosevelt. In this superlative volume, Jean Edward Smith combines contemporary scholarship and a broad range of primary source material to provide an engrossing narrative of one of America’s greatest presidents.

Smith recounts FDR’s battles with polio and physical disability, and how these experiences helped forge the resolve that FDR used to surmount the economic turmoil of the Great Depression and the wartime threat of totalitarianism.

This bestseller among books on Franklin Roosevelt gives us the clearest picture yet of how a quintessential Knickerbocker aristocrat, a man who never had to depend on a paycheck, became the common man’s president. The result is a powerful account that adds fresh perspectives and draws profound conclusions about a man whose story is widely known but far less well understood.

Traitor to His Class by H. W. Brands 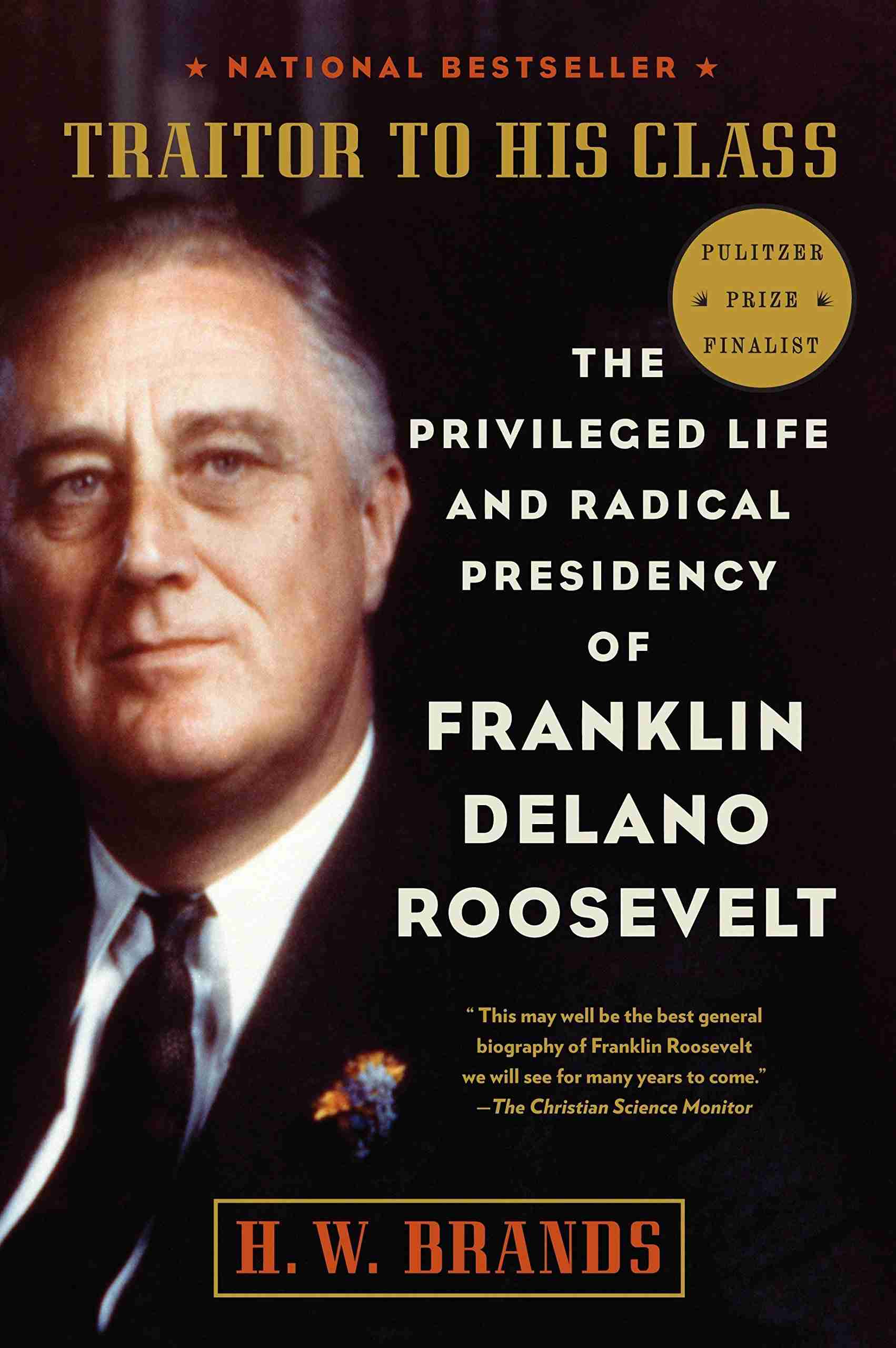 Historian and biographer H.W. Brands explores the powerful influence of FDR’s dominating mother and the often tense and always unusual partnership between FDR and his wife, Eleanor, and her indispensable contributions to his presidency. Most of all, the book traces in breathtaking detail FDR’s revolutionary efforts with his New Deal legislation to transform the American political economy in order to save it, his forceful – and cagey – leadership before and during World War II, and his lasting legacy in creating the foundations of the postwar international order.

Franklin and Winston by Jon Meacham 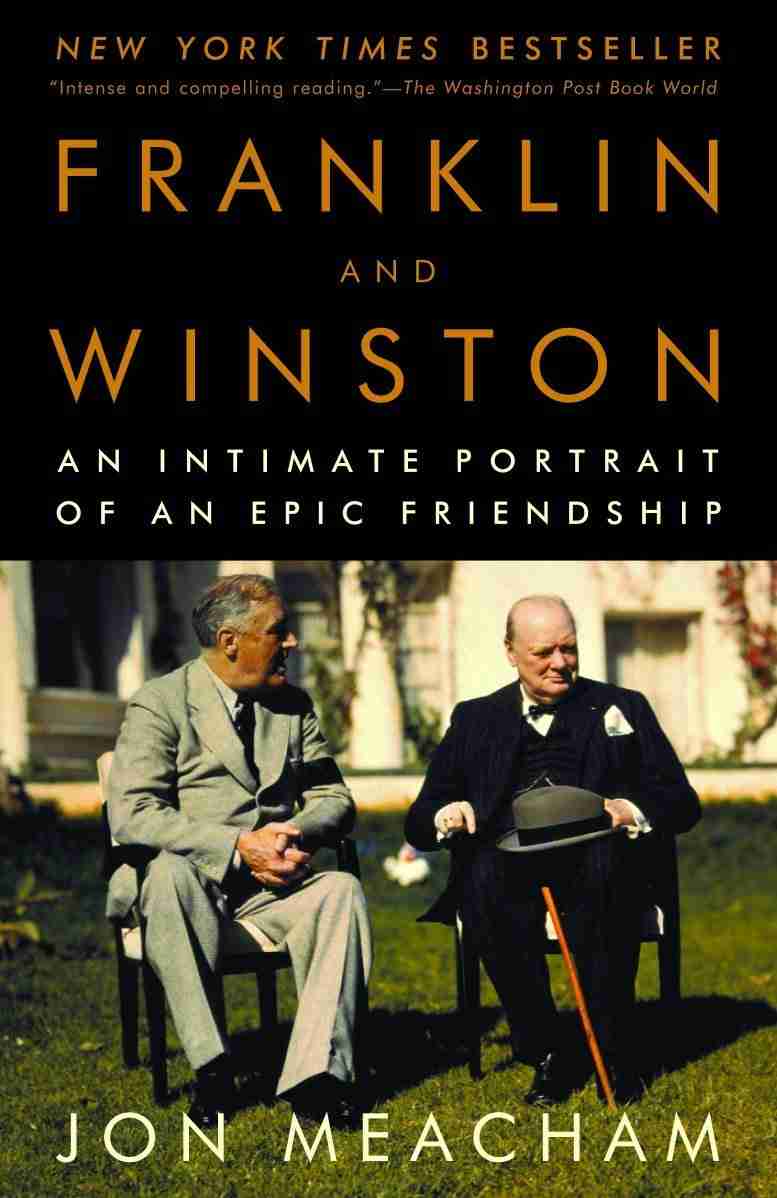 The most complete portrait ever drawn of the complex emotional connection between two of history’s towering leaders. Franklin Roosevelt and Winston Churchill were the greatest leaders of “the Greatest Generation.” In Franklin and Winston, Jon Meacham explores the fascinating relationship between the two men who piloted the free world to victory in World War II.

It was a crucial friendship, and a unique one – a president and a prime minister spending enormous amounts of time together (113 days during the war) and exchanging nearly two thousand messages. Amid cocktails, cigarettes, and cigars, they met, often secretly, in places as far-flung as Washington, Hyde Park, Casablanca, and Teheran, talking to each other of war, politics, the burden of command, their health, their wives, and their children.

The Coming of the New Deal by Arthur M. Schlesinger, Jr. 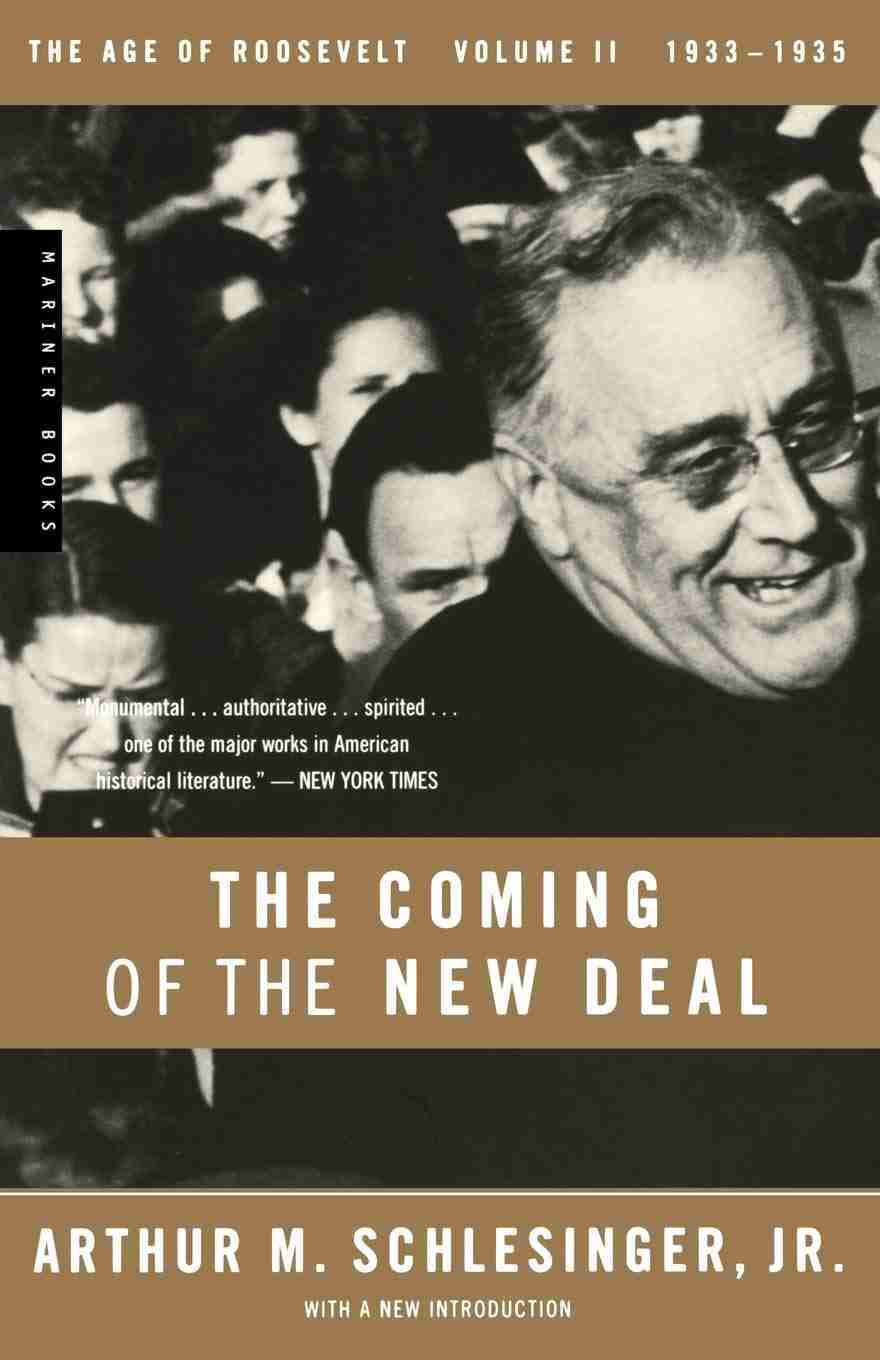 The Coming of the New Deal, 1933-1935, volume two of Pulitzer Prize-winning historian and biographer Arthur M. Schlesinger, Jr.’s Age of Roosevelt series, describes Franklin Delano Roosevelt’s first tumultuous years in the White House. Coming into office at the bottom of the Great Depression, FDR told the American people that they have nothing to fear but fear itself. The conventional wisdom having failed, he tried unorthodox remedies to avert economic collapse.

His first hundred days restored national morale, and his New Dealers filled Washington with new approaches to recovery and reform. Combining idealistic ends with realistic means, Roosevelt proposed to humanize, redeem, and rescue capitalism. The Coming of the New Deal, written with Schlesinger’s customary verve, is a gripping account of critical years in the history of the republic.

Before the Trumpet: Young Franklin Roosevelt by Geoffrey C. Ward 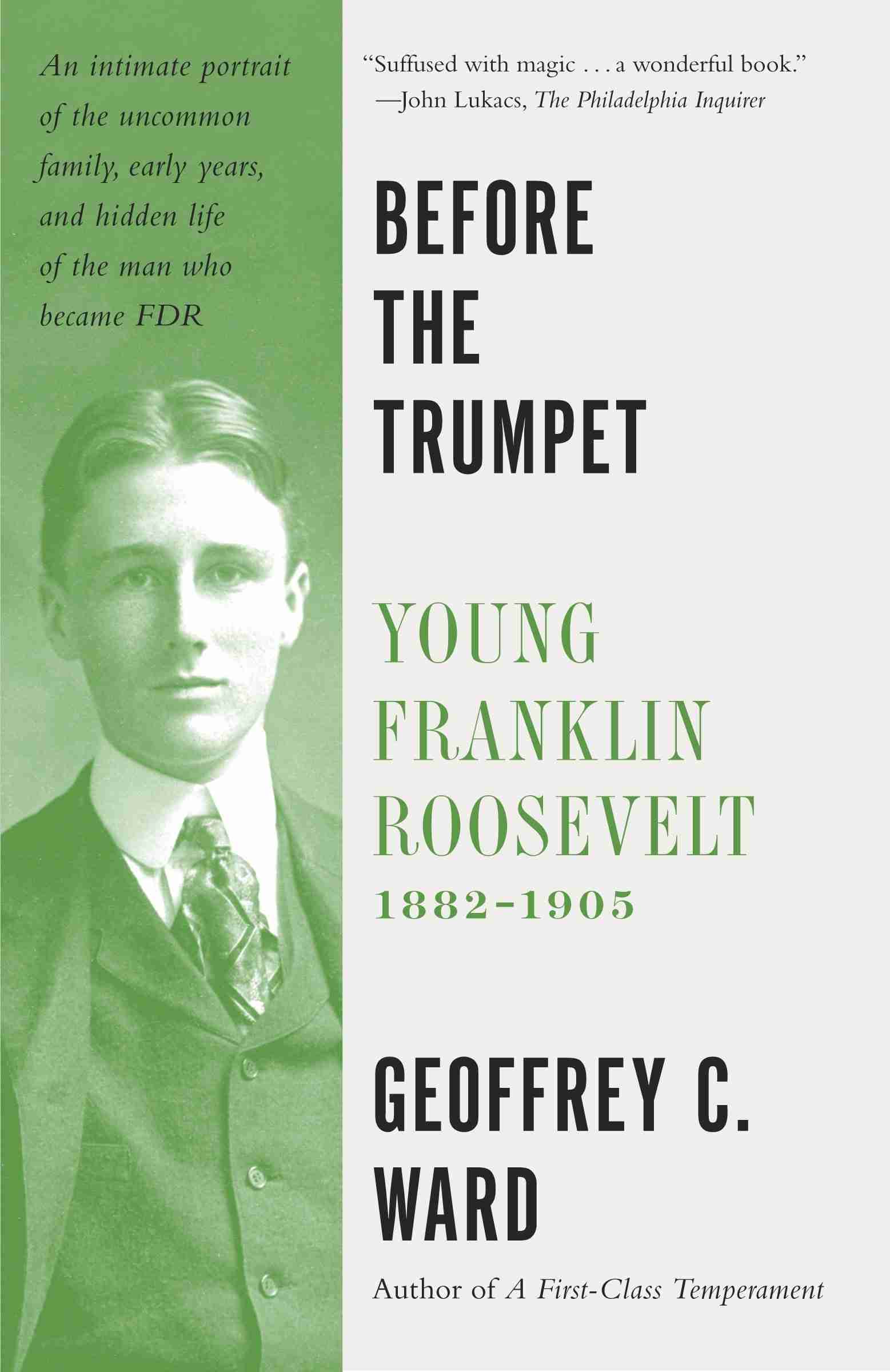 Before Pearl Harbor, before polio and his entry into politics, FDR was a handsome, pampered, but strong-willed youth, the center of a rarefied world. In Before the Trumpet, the award-winning historian Geoffrey C. Ward transports the reader to that world – Hyde Park on the Hudson and Campobello Island, Groton and Harvard and the Continent – to recreate as never before the formative years of the man who would become the 20th century’s greatest president.

Here, drawn from thousands of original documents (many never previously published), is a richly-detailed, intimate biography, its central figure surrounded by a colorful cast that includes an opium smuggler and a pious headmaster; Franklin’s distant cousin, Theodore and his remarkable mother, Sara; and the still-more remarkable young woman he wooed and won, his cousin Eleanor. This is a tale that would grip the reader even if its central character had not grown up to be FDR. 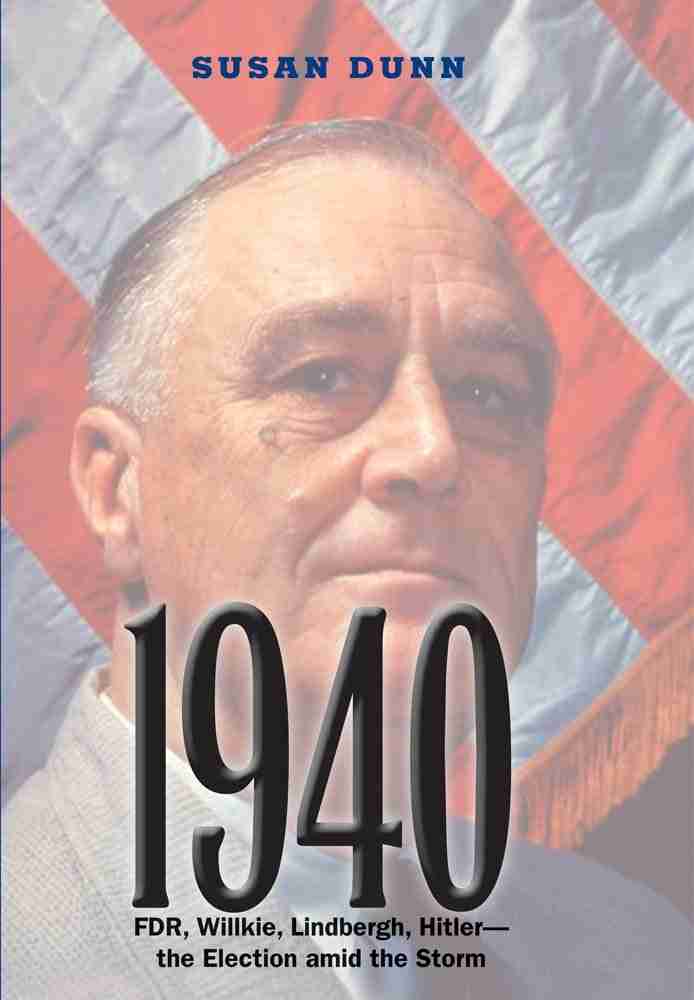 In 1940, against the explosive backdrop of the Nazi onslaught in Europe, two farsighted candidates for the U.S. presidency – Democrat Franklin D. Roosevelt, running for an unprecedented third term, and talented Republican businessman Wendell Willkie – found themselves on the defensive against American isolationists and their charismatic spokesman Charles Lindbergh, who called for surrender to Hitler’s demands.

In this dramatic account of that turbulent and consequential election, historian Susan Dunn brings to life the debates, the high-powered players, and the dawning awareness of the Nazi threat as the presidential candidates engaged in their own battle for supremacy. 1940 not only explores the contest between FDR and Willkie but also examines the key preparations for war that went forward, even in the midst of that divisive election season. 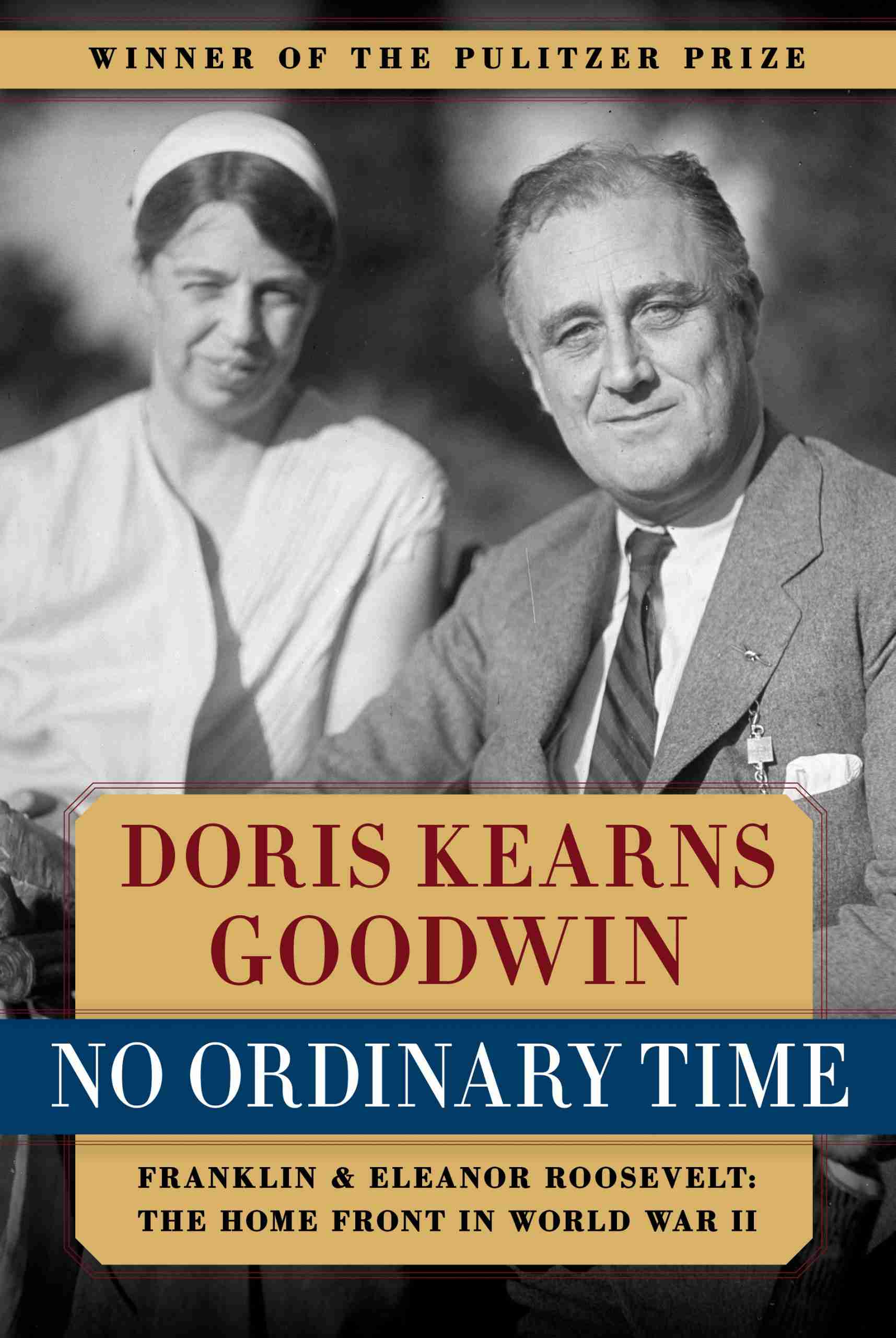 Winner of the Pulitzer Prize for History, No Ordinary Time is a monumental work, a brilliantly conceived chronicle of one of the most vibrant and revolutionary periods in the history of the United States.

With an extraordinary collection of details, Goodwin masterfully weaves together a striking number of storylines – Eleanor and Franklin’s marriage and remarkable partnership, Eleanor’s life as First Lady, and FDR’s White House and its impact on America as well as on a world at war. Goodwin effectively melds these details and stories into an unforgettable and intimate portrait of Eleanor and Franklin Roosevelt and of the time during which a new, modern America was born. 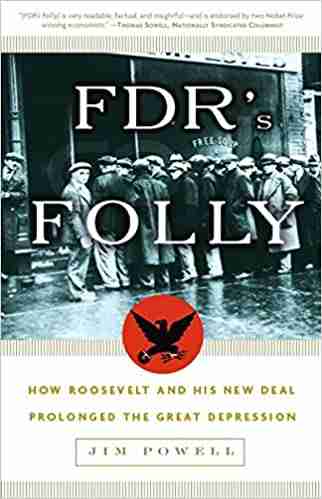 The Great Depression and the New Deal. For generations, the collective American consciousness has believed that the former ruined the country and the latter saved it. Endless praise has been heaped upon President Franklin Delano Roosevelt for masterfully reining in the Depression’s destructive effects and propping up the country on his New Deal platform.

In fact, FDR has achieved mythical status in American history and is considered to be, along with Washington, Jefferson, and Lincoln, one of the greatest presidents of all time. But would the Great Depression have been so catastrophic had the New Deal never been implemented?

Offering a healthy dose of skepticism among books on Franklin Roosevelt, historian Jim Powell argues that it was in fact the New Deal itself, with its shortsighted programs, that deepened the Great Depression, swelled the federal government, and prevented the country from turning around quickly. 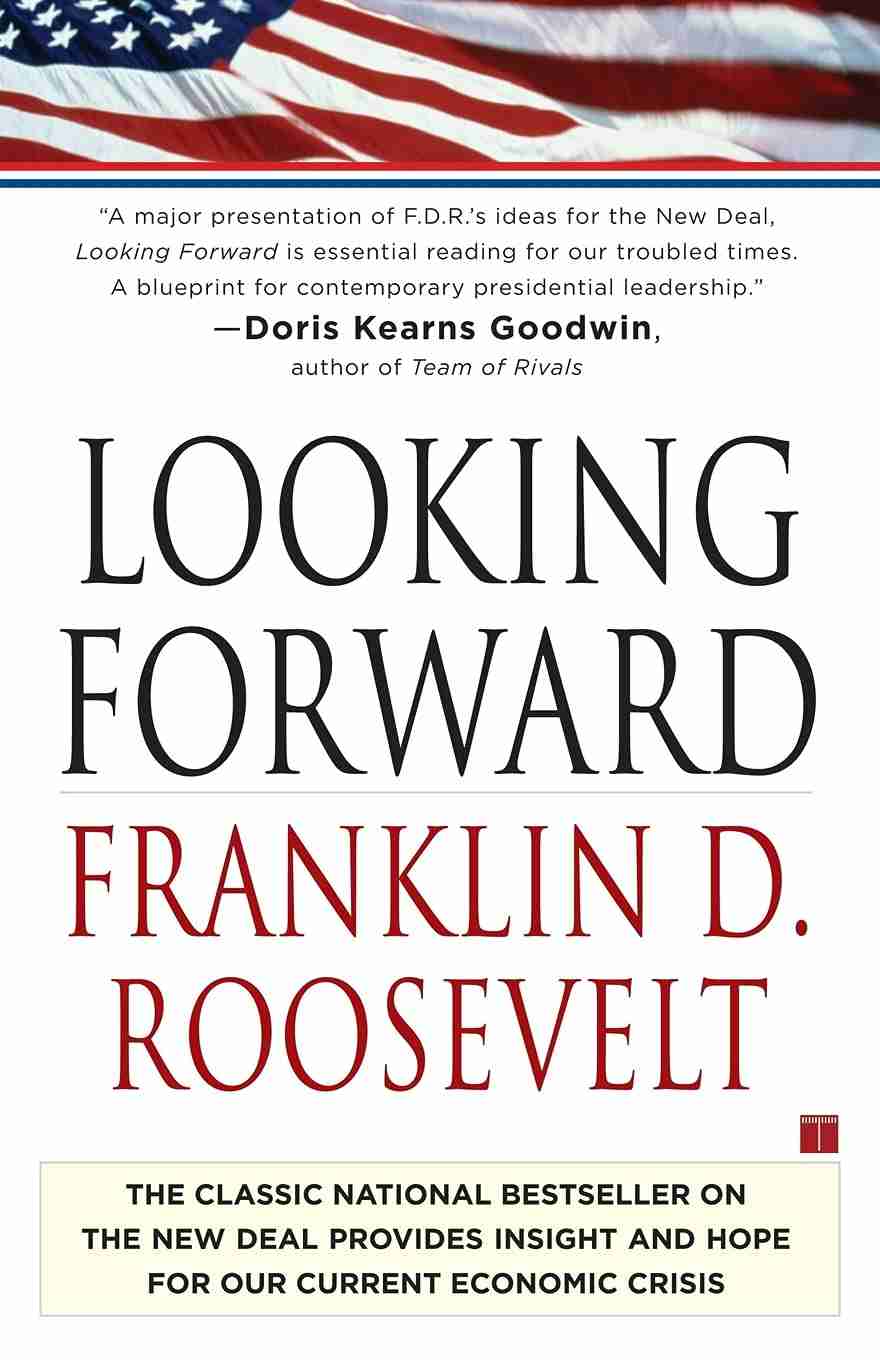 Published in March 1933 when Franklin Delano Roosevelt was first inaugurated, the classic New York Times bestseller Looking Forward delivers F.D.R.’s honest appraisal of the events that contributed to the Great Depression and mirror our own situation today. With blunt, unflinching, and clear prose Roosevelt attacks head-on the failure of the banking system and the U.S. government and sets forth his reasoning and hope for the major reforms of his New Deal.

If you enjoyed this guide to the 10 best books on Franklin Roosevelt, be sure to check out our list of 10 Books Albert Einstein Recommends Reading!

Essential Books by Jimmy Carter Jimmy Carter and books simply go hand in hand, whether speaking of those written by or about him, after all,…

Peter Theil Book Recommendations For many reasons, self-made billionaire Peter Theil and books simply go hand in hand, whether it’s those written about or by…

A Prep Guide for Investors Form a Financial Plan First and Foremost, a responsible investor should calculate his or her personal living expenses and set…

Technical Indicators In the realm of technical analysis in finance, a technical indicator refers to a mathematical calculation or pattern signal based on the historic…

The Viral Ballad of AMC Stock Up Nearly 3,000% YTD For the purposes of establishing a case study in regards to the modern viral volatility…