The Conservatory for Coffee, Tea, and Cocoa 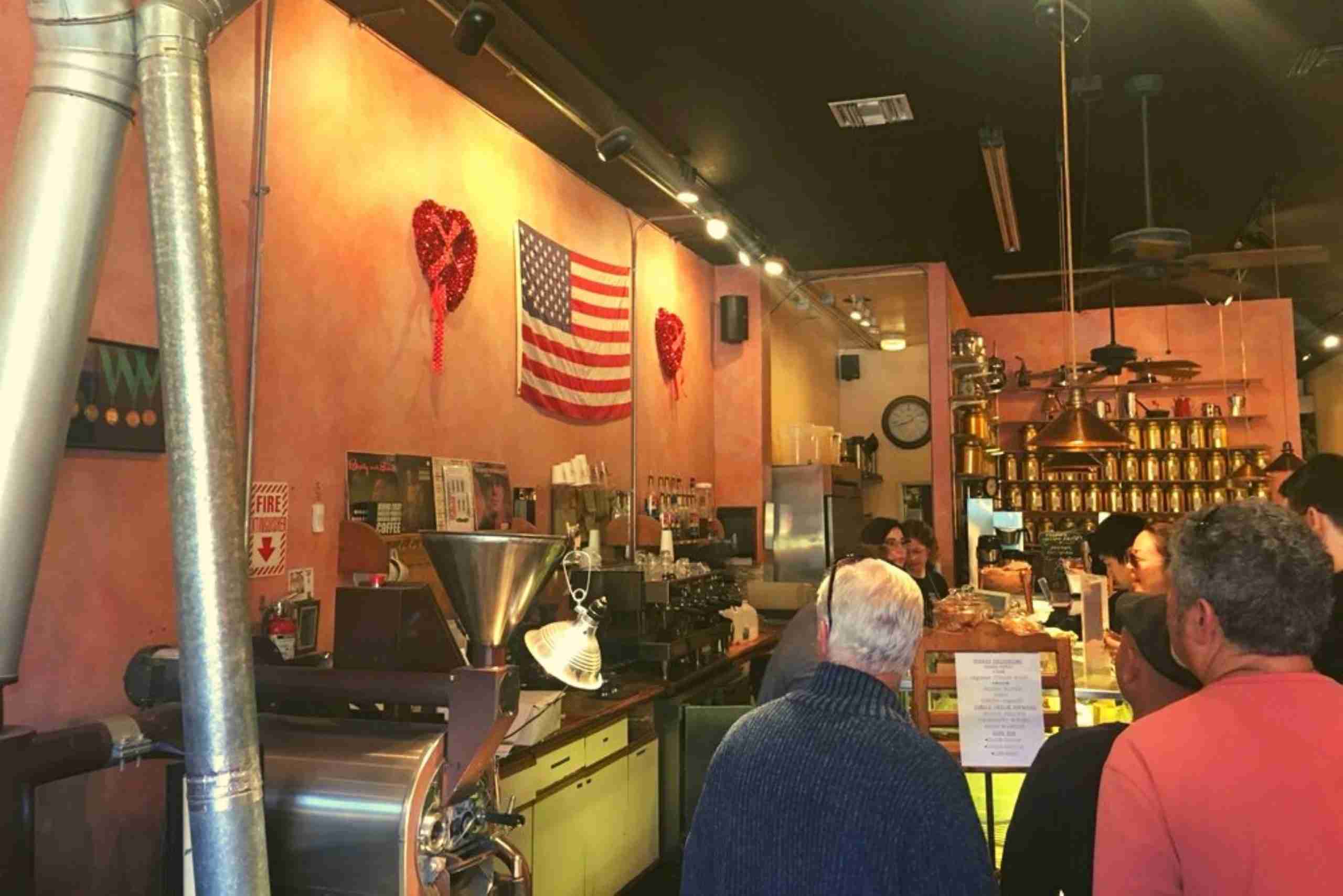 Since opening in 1995, The Conservatory has been a locally beloved provider of freshly roasted organic coffees as well as a hallmark among Culver City coffee shops. Inside, the wholesome atmosphere is perhaps most accentuated by warm copper tones, beautiful cast iron seating, a fairly realistic corner tree that’s usually decked out with festive holiday decor, and many golden tea tins stacked near to the ceiling. Concerning the latter, the shop offers more than 50 unique loose leaf teas, tea blends, tisanes, and herbs from around the world, each cozily nestled on their Great Wall of Tea. 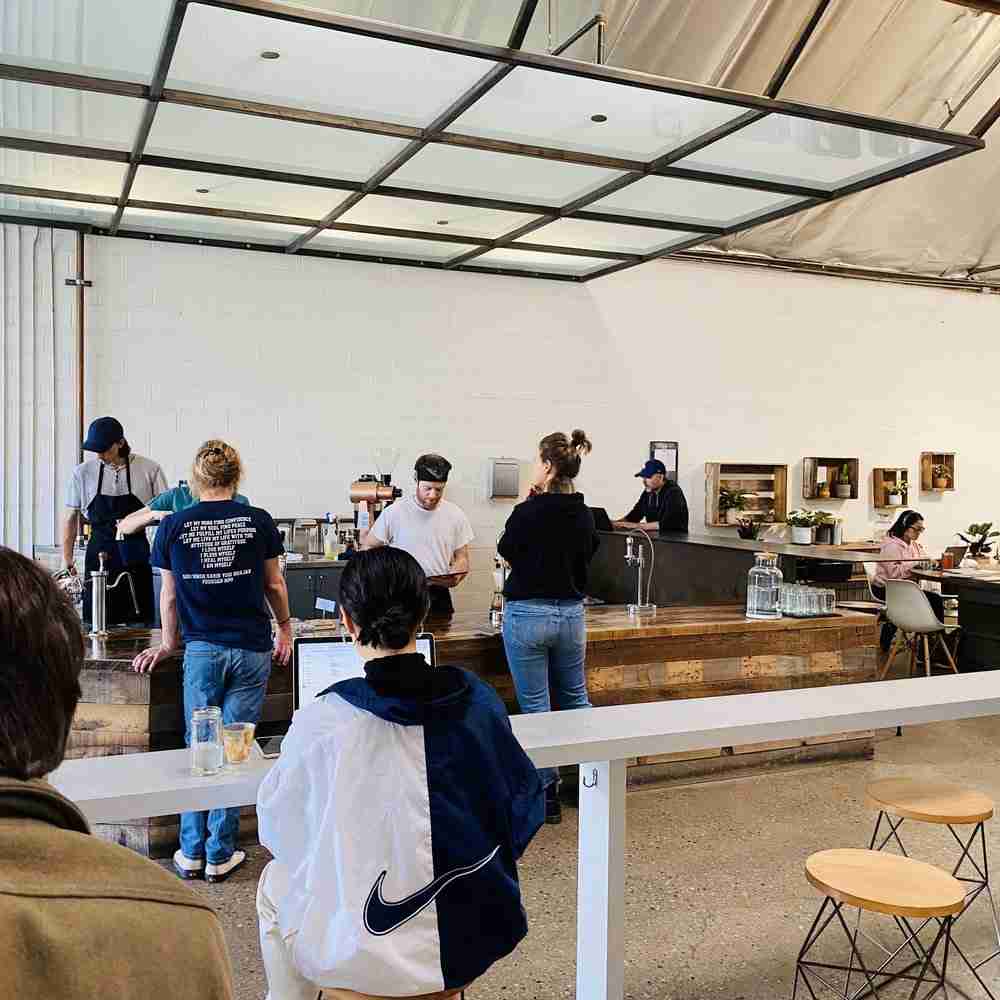 Sheltered within a warehouse-sized community-driven space rife with seating, tables, and subtle bohemian flare is Bar Nine, a cafe and roastery centered on delivering a great guest experience through simplicity, hospitality, and sustainability. This operation harbors the impressive kind of java talent that has earned them a 2017 StarChefs Rising Star Roaster, a featured service at TED 2015, multiple 95 point reviews on Coffee Review, and an LA Times 101 mention for their blend The 9.

Bar Nine is one of the first coffee shops in the nation to have fully embraced an all-glass takeaway program, meaning to-go coffees come in cute jar-like glasses rather than wasteful single-use cups, that being said, the prices may seem a bit steeper than usual but bearing in mind, each menu item’s price also includes the thoughtful value of paying their employees exceptional living wages makes the slight upcharge well worth it! 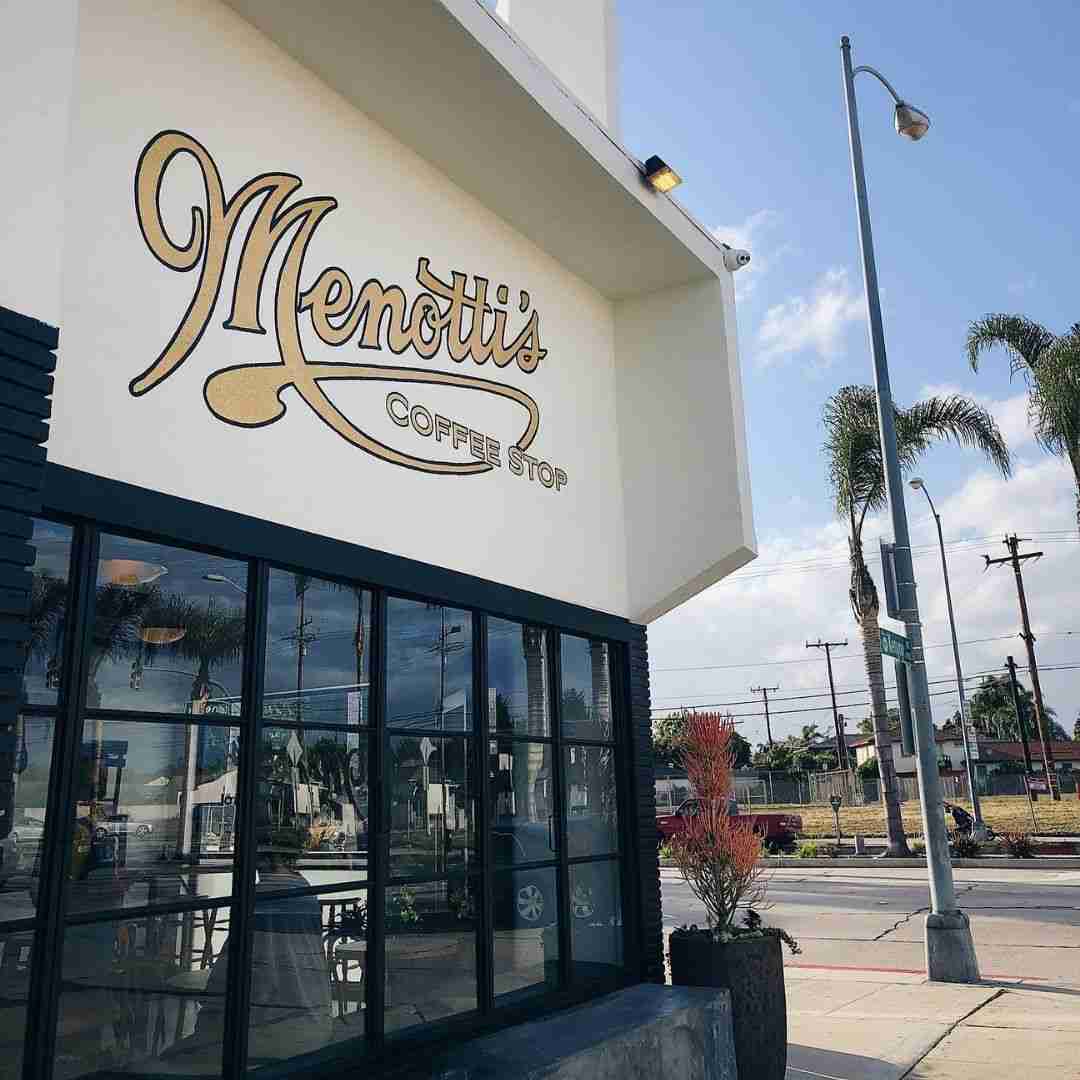 Boasting a creamy white exterior graced with the cool vintage charm of Menotti’s written in golden cursive lettering, this corner java stop is certainly one of the hippest hangouts Culver City coffee shops have to offer. The vintage element continues as you step through the door and are greeted by dark wooden furnishings, a dutifully arranged vinyl collection, and a wall mural photograph of American novelist, James Baldwin enjoying his own mid-day delight.

You’re going to see some uniquely amazing drinks dappled throughout the room; one is the Espresso & Tonic, an iced 16oz beverage that consists of tonic water, a double shot of espresso floating on top, and a fresh orange peel zested to top it off; another is the Spanish Latte, made with sweetened condensed milk and cinnamon.

On a separate note, we gotta give them a shoutout for having an artist paint one of LA’s most iconic Kobe Bryant murals over their clean white storefront shortly after the late great Laker legend tragically passed away in January 2020. 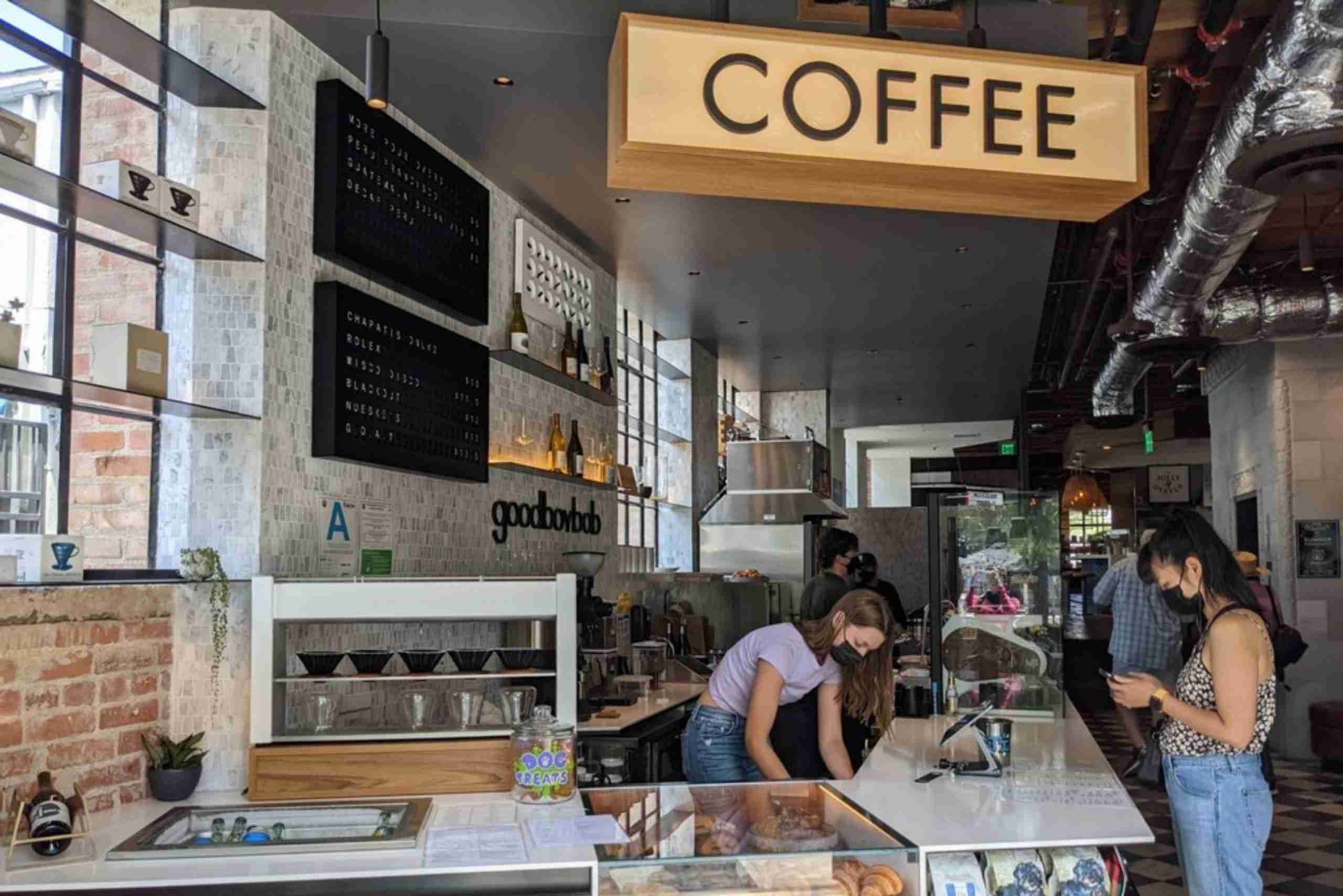 Through unique relationships with international growers and importers, goodboybob is able to regularly feature some of mother Earth’s rarest coffees – we’re talkin’ java you definitely won’t find anywhere else in LA! Not to mention the self-described coffee nerds behind the counter, who pour their heart and soul into finding, roasting, and preparing coffee with the highest standards, whilst not acting all hoity-toity about it.

Their adorable industrial-inspired stall enjoys staple status at Citizen Market, a popular, marble-lined food hall conveniently positioned in the center of downtown; it’s home to unique restaurateurs with offerings that complement and contrast with one another. Consider pairing all those delicious bites with a glass or bottle from goodboybob’s diverse selection of wine and beer. 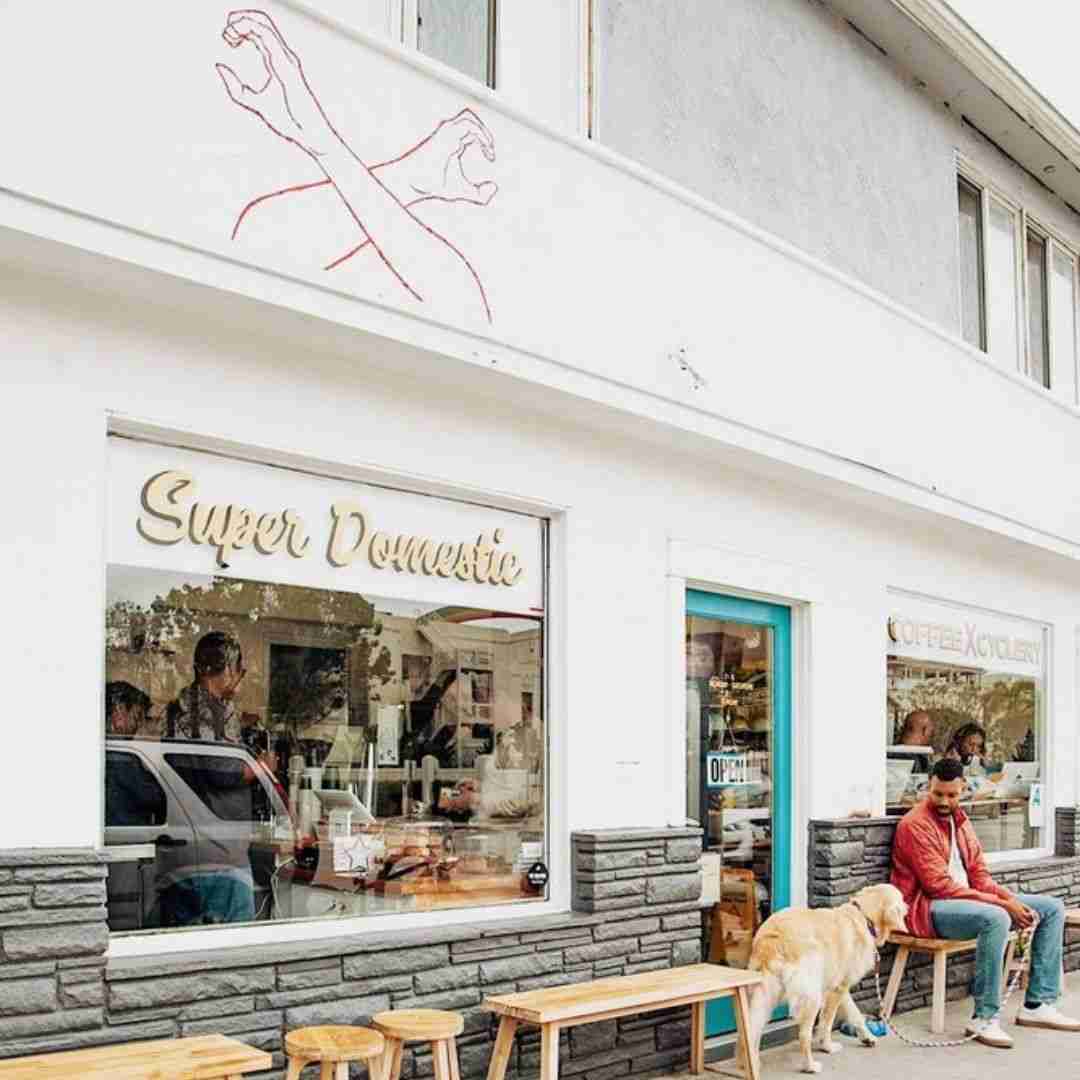 Occupying colorful, plant-dappled quarters externally identifiable by the turquoise trimmed front door, Super Domestic is an aesthetically gifted amalgamation of bicycle gear shop and cafe. The name itself comes from a French cycling term, Super Domestique, whom is the bicyclist team member that does whatever it takes to help their leader steal the win. Spurring the community forward via caffeine-induced productivity, the shop, in their own way, is likewise helping everyone who comes in have the best day possible! 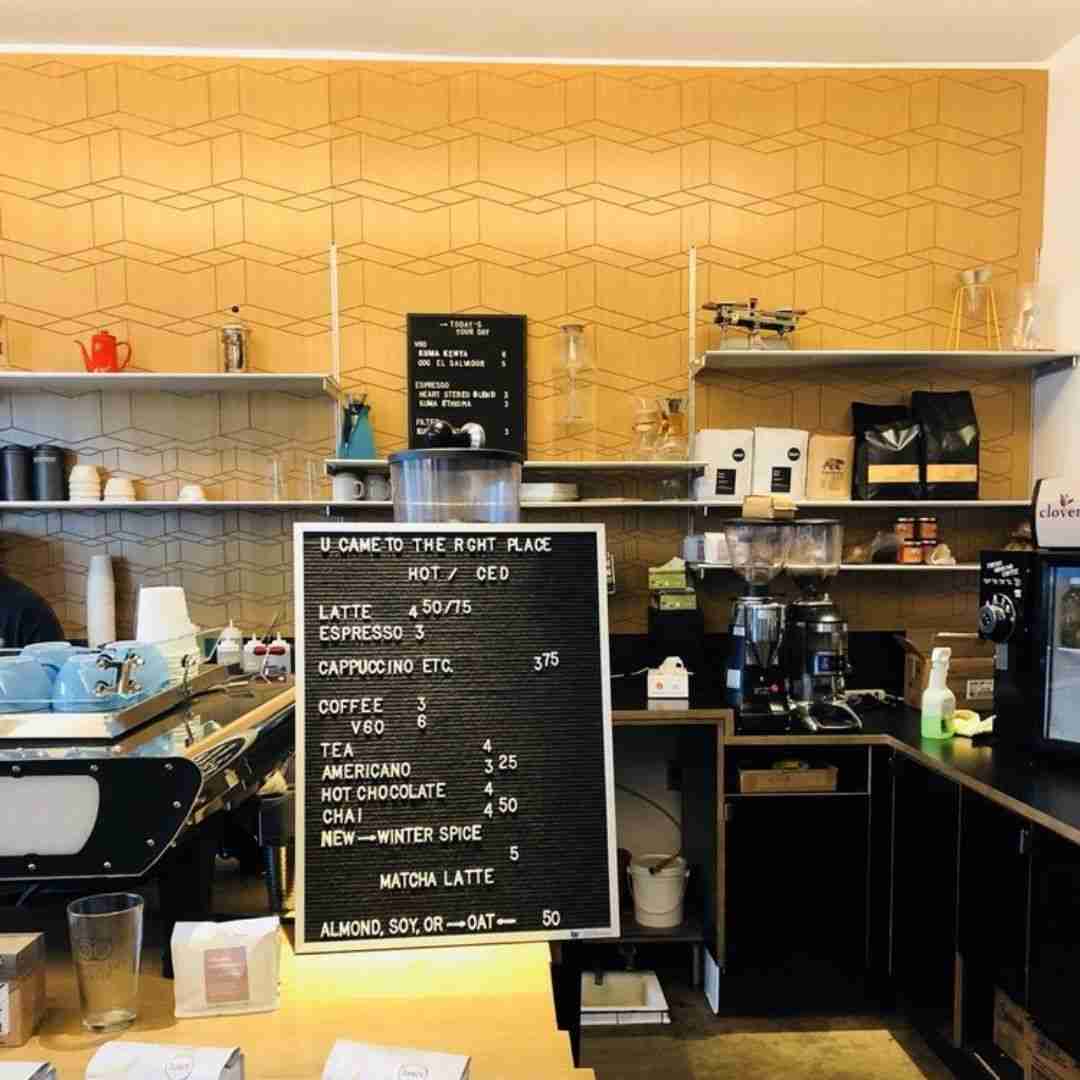 What originally started out as the whimsical fantasy of an established architect from China, first came to fruition in the form of a Highland Park pop-up, and ultimately found a forever brick & mortar home on Washington Boulevard in 2013, has since become one of the most locally cherished Culver City coffee shops there is. A multi-roaster, Cognoscenti serves a variety of rotating products with an open mind, taking pride in their everlasting journey perfecting the art of a perfectly brewed cup of coffee. 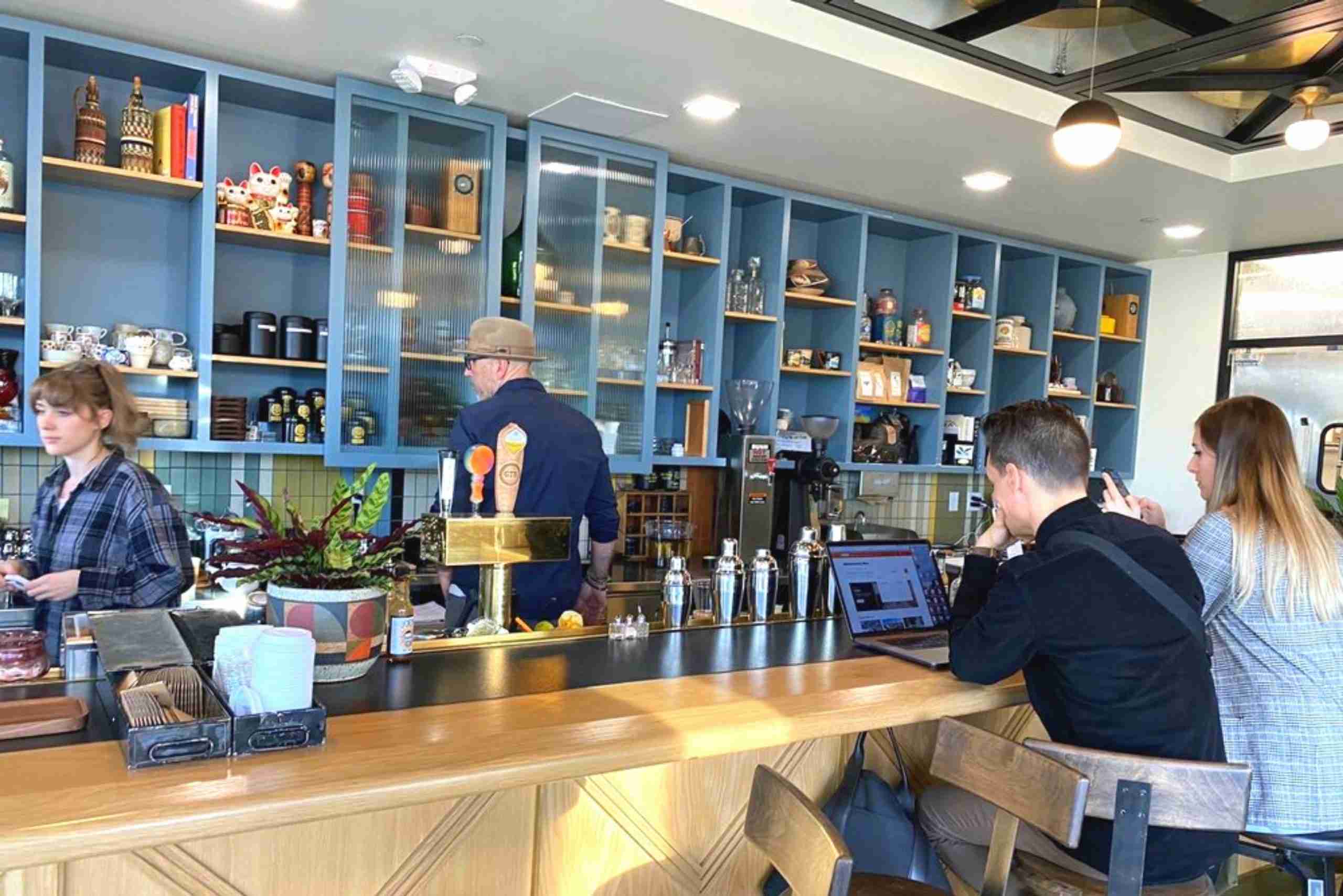 With the polish of an on-trend brunch destination and the coziness of a family-owned cafe, Millcross roasts and pours specialty coffees responsibly sourced from the best growing regions around the globe. So whether sipping on your favorite caffeinated beverage on a stool at the end of the light hardwood bartop or gathering at a table with friends over mouthwatering dishes from their full breakfast menu, there’s something for every occasion here!

They get pretty crafty with the coffee too so if you’re in the mood for a flavorful adventure, be sure to browse the seasonal and signature drink menus, which include an Apple Pie Latte and exquisite London Fog, respectively. 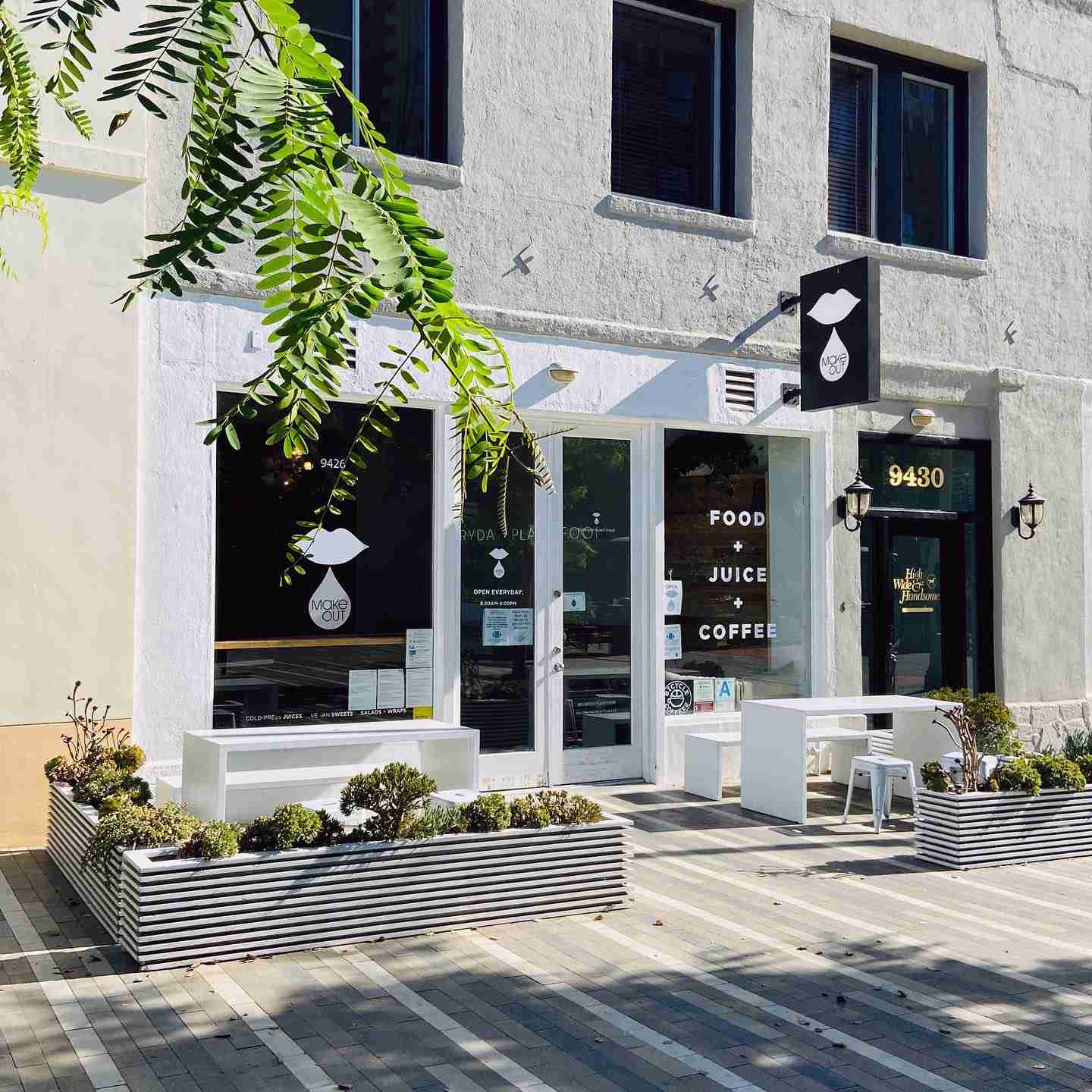 A bastion of vegetarianism in the heart of town, Make Out fulfills the promise of everyday plant food in its procuring a broad menu of cold-pressed juices, carefully crafted smoothies, superfood coffee elixirs, and overall nutritiously centered foods. Inhabiting modern, chic digs, what may even be the most instagrammable setting among Culver City coffee shops, this operation is the brainchild of world-renowned chef, Matthew Kenney, who specializes in plant-based cuisine and is determined to make these delicious dishes as well as the vegetarian diet accessible in the everyday setting. 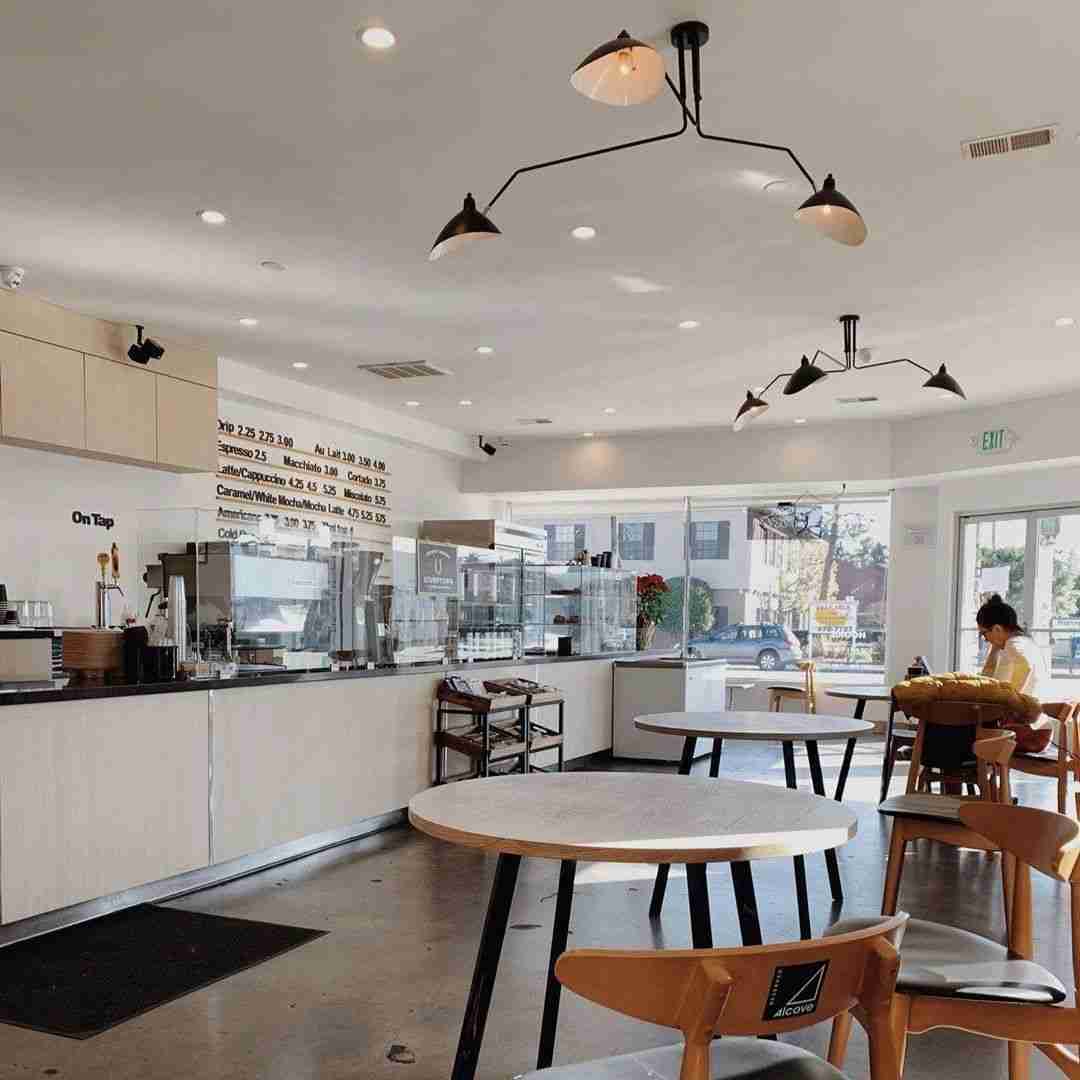 Snuggled in the nearby neighborhood of Mar Vista is 310, a spacious corner store java house accentuated by warm amber tones, cute light fixtures, and yummy coffee. Three friends decided to open this inviting space in order to bring good vibes and fun delicacies to their community, only naturally, the shop does serve Stumptown Coffee, Art of Tea, and scrumptious baked treats. 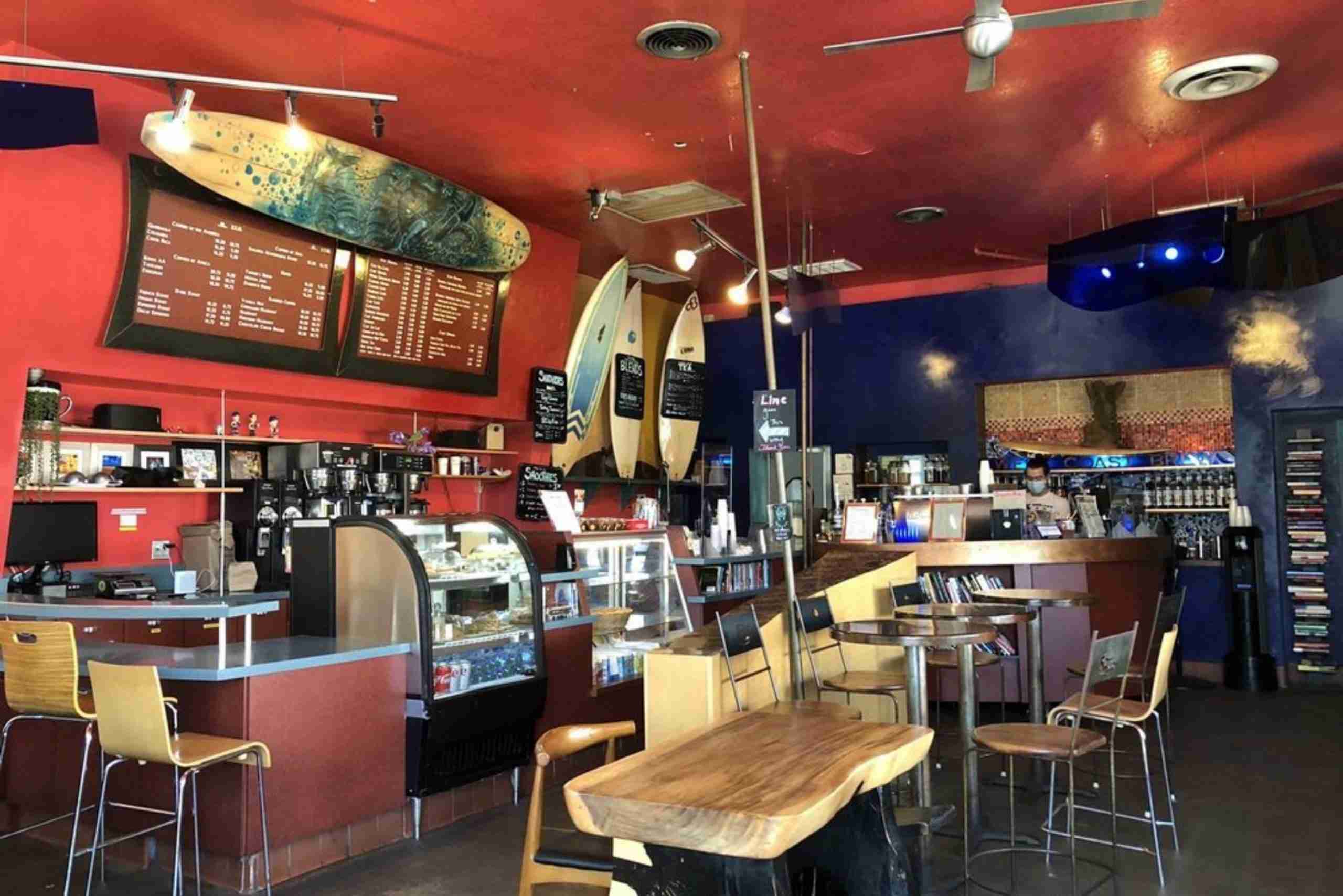 Sporting a groovy interior adorned by various surfboards, Tanner’s Coffee Company is a casual neighborhood gem perfect for working or studying as they have ample seating arrangements, plenty of charging outlets, and if you get a tad burnt out, books and games for light-hearted enjoyment. On a side note, back in May 2016, the United States Senator from Vermont, Bernie Sanders stopped by for a cup of some of the friendliest coffee Los Angeles has to offer – photographic evidence on their Facebook page!

Around the early 2000s, in Northern California, a slightly disaffected freelance musician and coffee lunatic, weary of the commercial coffee enterprise and stale, overly roasted beans, decided to open a roaster for people who were clamoring for the actual taste of fresh coffee. His humble vision has since blossomed into a network of cafes across the United States, Japan, and Korea, with that being said, the location most relevant to us is the professional, comfy stair step having operation along bustling Wahington Boulevard.

There, near the base of an upscale apartment building, this store serves both its community of artisans and innovators, and everyone else who happens to meander on by, after all, being in such close proximity to the beating pulse of cinematography surely guarantees an intellectually diverse array of characters.

If you enjoyed this guide to the best Culver City coffee shops, be sure to check out our list of the Top 15 Coffee Shops in Santa Monica!