A Guide to San Francisco Bookstores

City Lights Bookstore was founded by poet Lawrence Ferlinghetti in 1953, and became an instant gathering place for readers, writers, artists, and activists. By 1955, Ferlinghetti decided to launch City Lights Publishers with the now-famous Pocket Poets Series. The magnetic combination of selling and publishing books has made this enchanting shelf-laden establishment the ultimate literary destination among San Francisco bookstores.

Once America’s only all-paperback book shop, City Lights has expanded several times and currently offers three floors of both new-release hardcovers and quality paperbacks from all of the major publishing houses, along with an impressive range of titles from smaller, harder-to-find, specialty publishers. 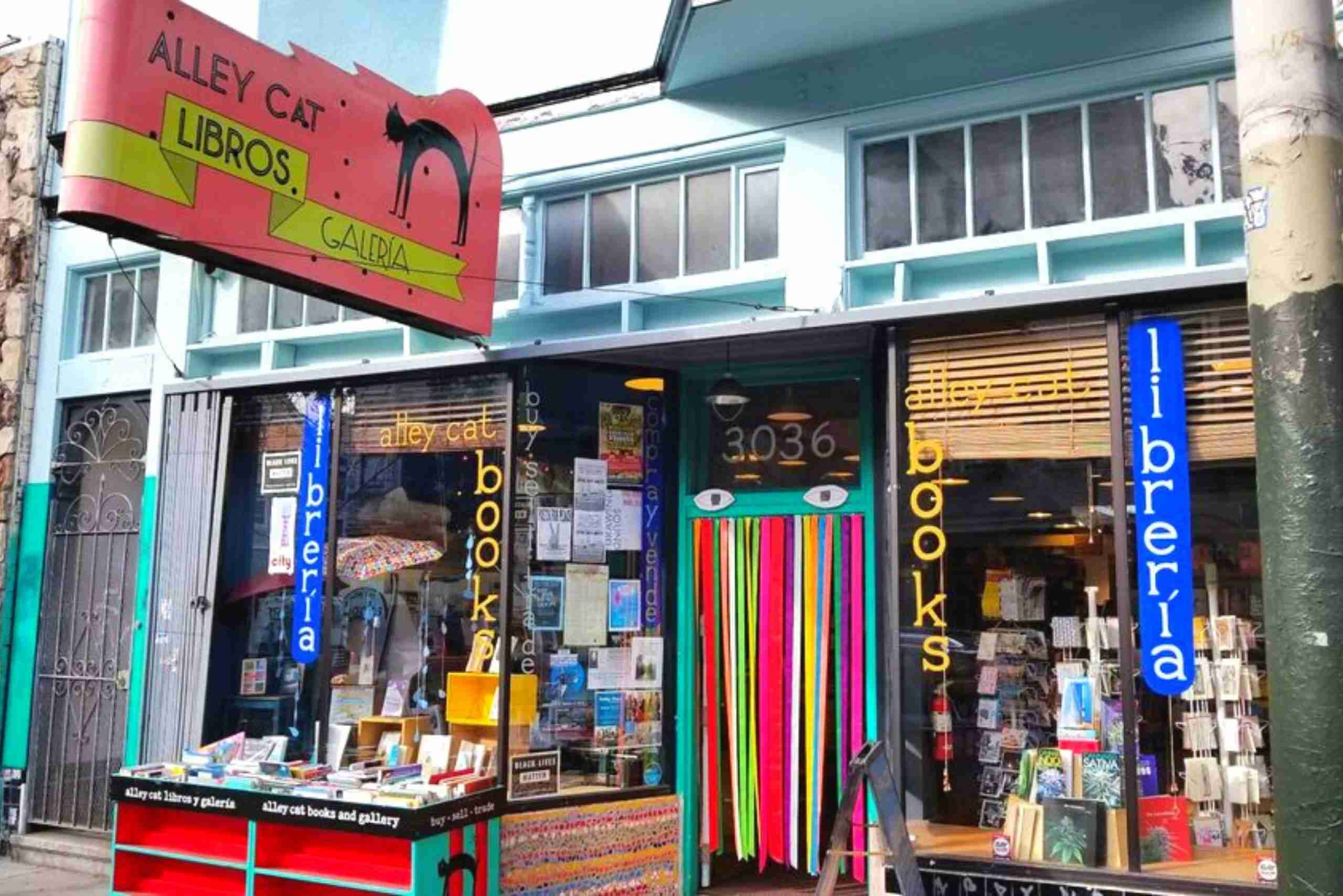 If you’re looking for a lot of books and a pleasant place to peruse them, seek no further. Alley Cat Books opened its colorful doors on 24th Street in the heart of the Mission in 2011, and maintains a steady supply of new, used, and remaindered books – in English and Spanish – for the increasingly book-hungry neighborhood!

An unconscious drift towards the rear gives way to local and international artworks dappled throughout towering white walls. Back there, on the right day, a visitor may even stumble across an art opening, poetry reading, or film screening. Regardless, this general interest shop is filled with all sorts of wondrous obscurities you never knew you couldn’t live without. 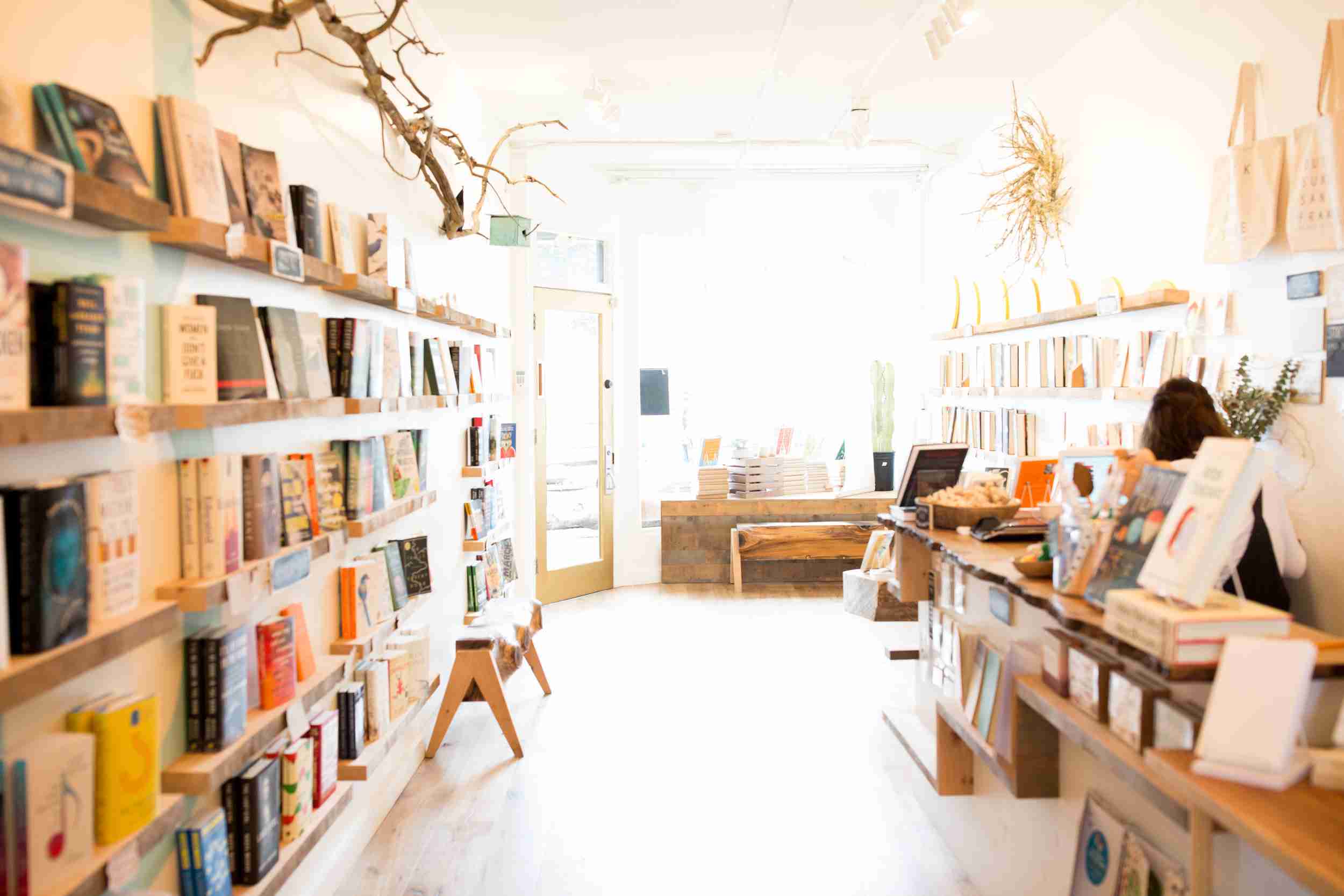 Nestled in the Outer Sunset, Black Bird Bookstore showcases an aesthetically pleasing, hand-curated selection of fiction, nonfiction, socio-political, and children’s books, along with a collection of home goods, puzzles, and toys. This bright and bubbly shop is owned and operated by the woman who started Bluestocking Books in NYC but ultimately sold the business to pursue an MBA.

Now, many moons later, she is back to her roots, stocking light wooden shelves with books that reflect her current mind frame as an active reader, a mother of 3 children, and a concerned citizen of this country. 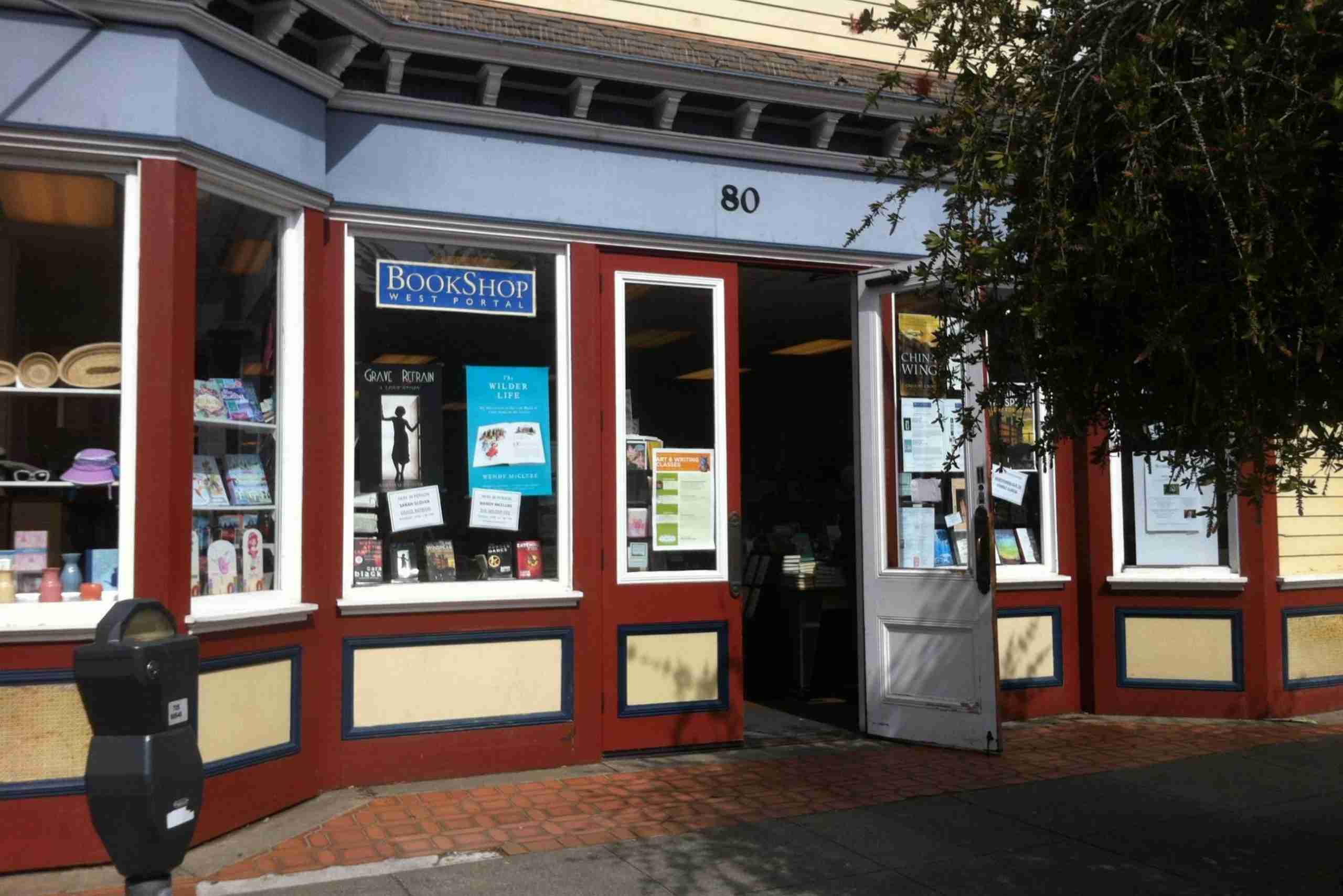 For over fourteen years, BookShop West Portal has been a locally-owned, quaint independent bookstore in the heart of the West Portal neighborhood, just two blocks down from the West Portal MUNI Station and right across from the Empire Movie Theatre. This beloved gem features an extensive children’s section, displays staff recommended titles, and offers a frequent buyer program for discounted rates after a minimum amount of purchasing. 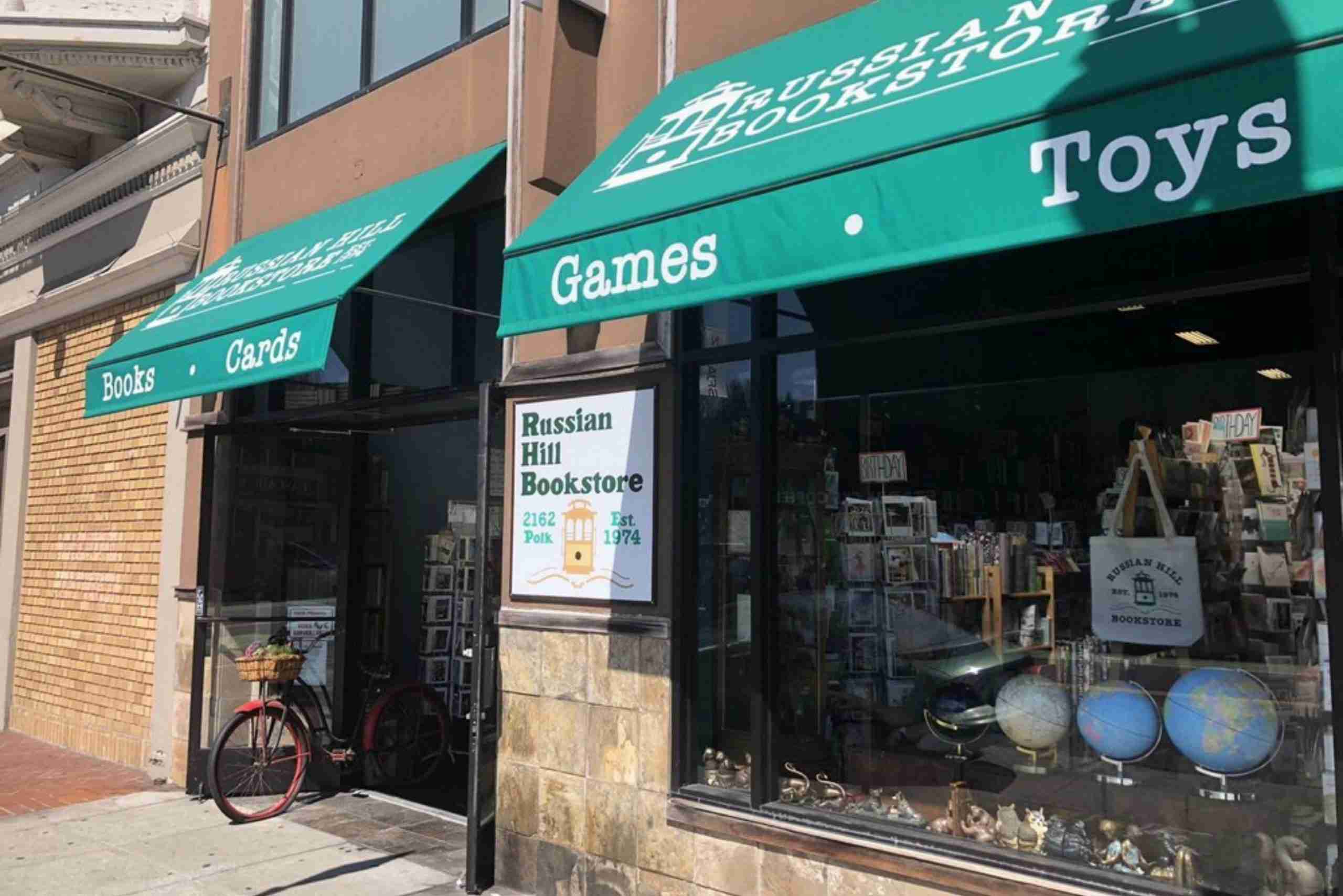 Originally starting out as Sunset Bookstore in 1974, a small used bookshop servicing the Sunset District west of 19th Avenue, this bay area legacy business has been in continual operation for the past 47 years. Sunset Bookstore eventually closed and merged with Russian Hill Bookstore in the early 90s; henceforth also becoming the best note card shop in the city, and a favorite destination for toys and games for children of all ages.

Popular with local artists, designers, architects, writers, and art collectors, it’s always refreshing to come across a “real” used bookstore – complete with an elevated reading nook accessible via vintage wooden staircase – snuggled amidst one of America’s most densely populated metropolitans. 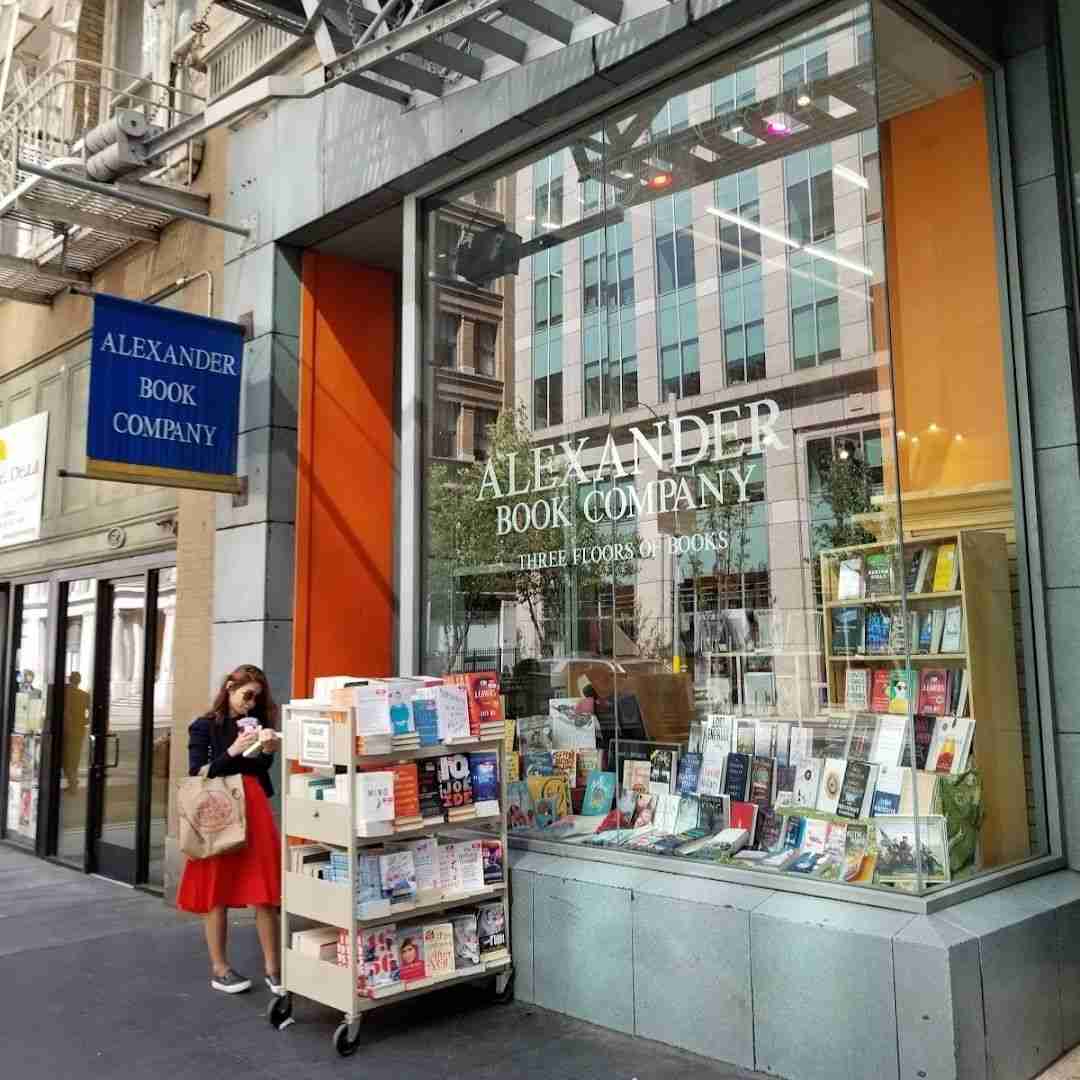 Home to more than 50,000 new books blanketed across three floors, Alexander’s is one of the largest independent San Francisco bookstores there is and sits only four blocks from Union Square. This shop has a frequent buyer program, many titles on sale, and a 25% discount on all adult hardcover fiction. With the Holiday season upon us, if presents for that beloved bibliophile in your life are top of mind, they also offer free gift-wrapping.

Not to mention, as of May 2021, Alexander’s is responsible for planting over 602,240 trees through their support of Trees for the Future, a non-profit organization planting trees around the world in communities struggling with severe problems related to deforestation.

Green Apple Books on the Park 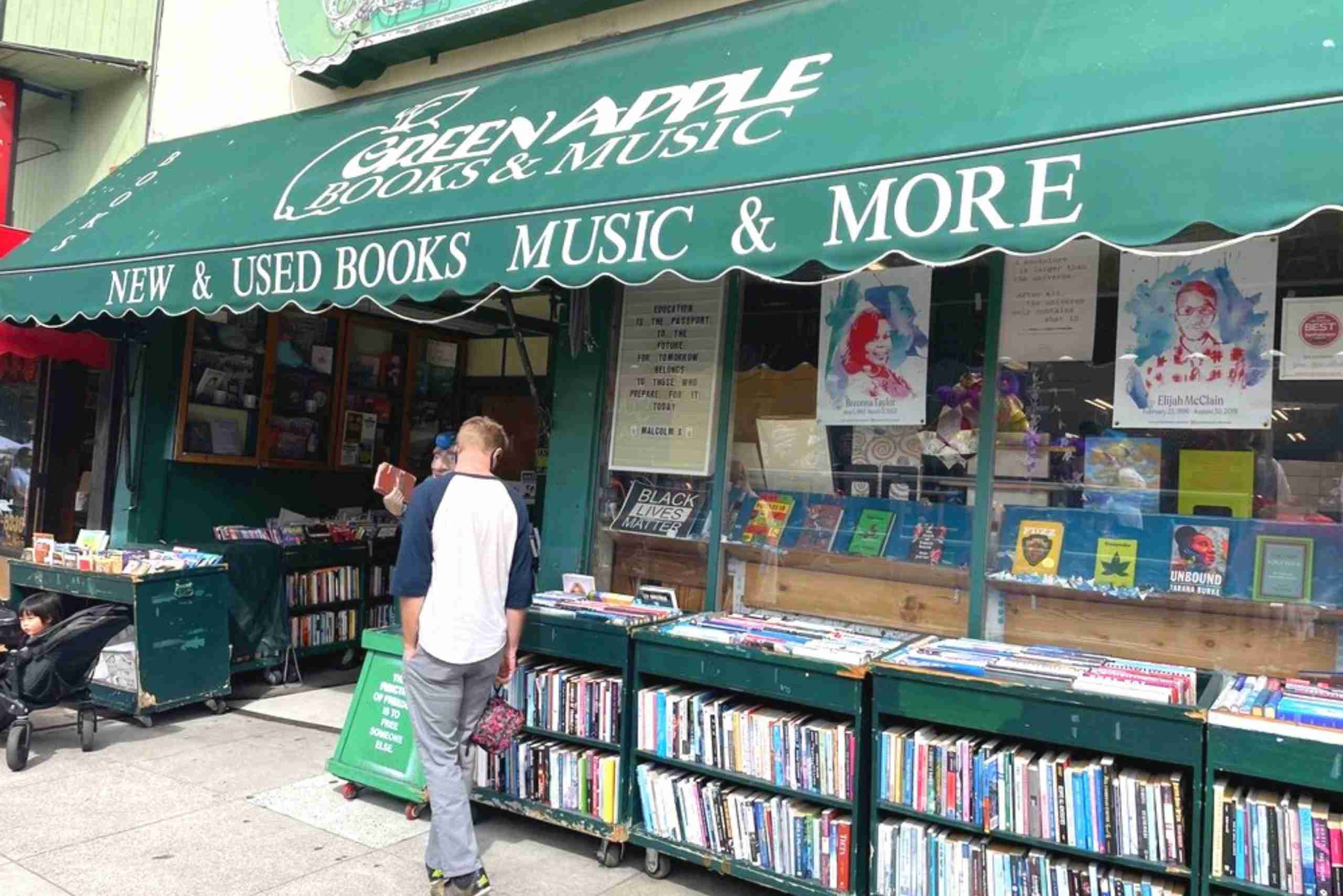 Richard Savoy founded Green Apple Books in 1967 when he was just 25 years old. The young man’s business experience amounted to a tour in the army and a stint as a radio technition for United Airlines. Nonetheless, with a deep love for the written word, some savings, and a credit union loan, his independent bookstore has since grown to encompass four beloved locations throughout the city.

The flagship and original storefront (housed in a building that predates 1906) near the corner of Clement Street and Sixth Avenue, in the heart of the Richmond District and tucked between Golden Gate Park and the Presidio, consists of two historic floors piled with new & used non-fiction, new releases, kids’ books, cookbooks, and much more!

Christopher’s Books has been poking out of the corner base of a classic San Franciscan building on 18th street and Missouri for over a quarter-century. This quaint Portero Hill’s gem has survived Amazon’s rise, the shifting demographics of their community, an ever-changing city landscape, and if there’s one thing for sure, won’t be going anywhere anytime soon. 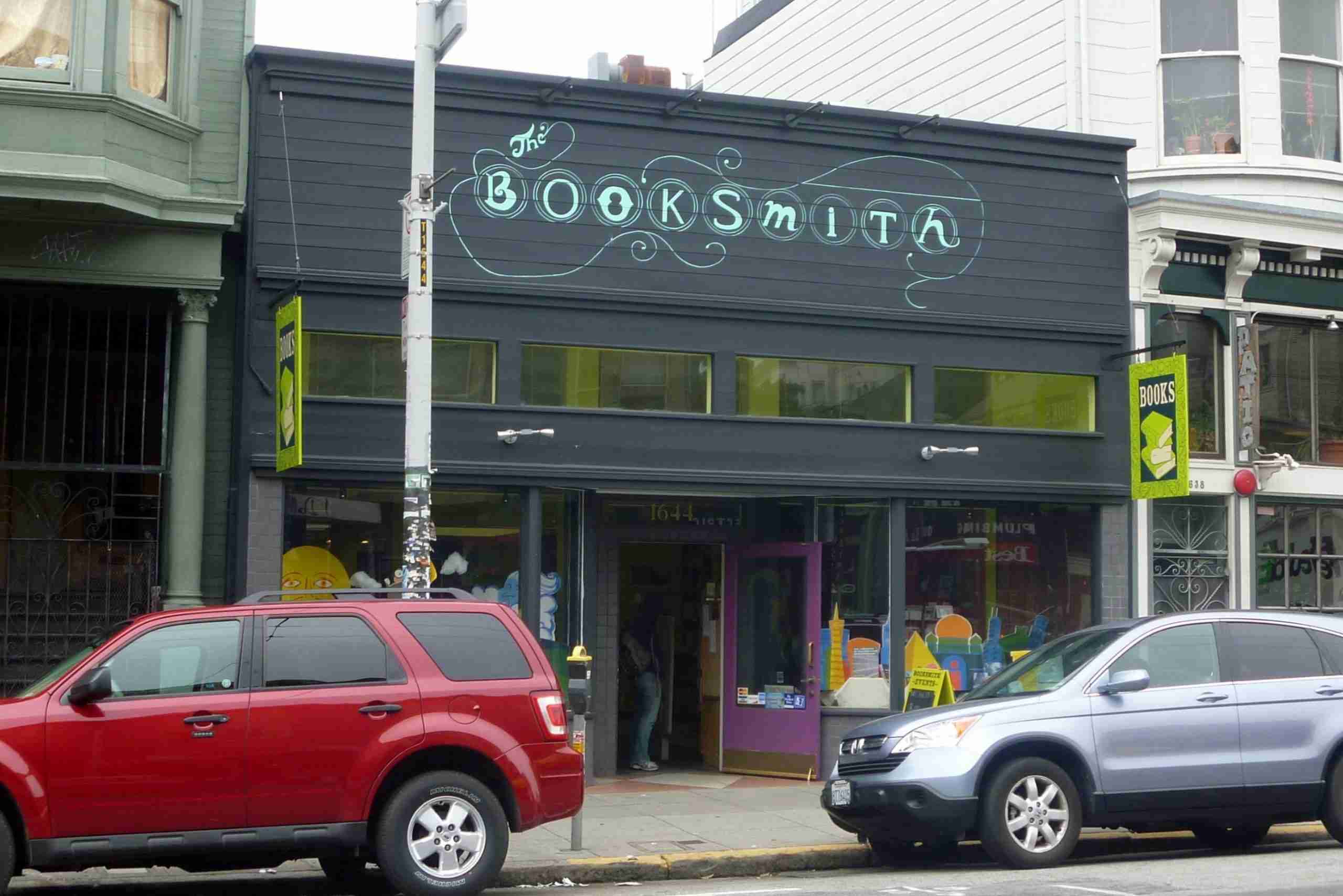 Embodying one of San Francisco’s first legacy businesses, The Booksmith launched in 1976 underneath the former I-Beam nightclub at 1746 Haight Street, and has been in its most recent home at 1644 Haight Street, since 1985. Venturing inside this matte black building touched by horizontally positioned olive green windows gives way to row upon row of shelves and wheeled tables placed on top of sturdy concrete flooring, as well as the occasional writing or speaking engagement – which have temporarily transitioned to virtual gatherings due to the pandemic.

Having curated a wide-ranging, constantly refreshing stock of books on all things Russia, Globus harbors within their floor to ceiling blue-trimmed glass storefront countless collectors’ volumes of Russian and Soviet classic literature, many of which are thankfully translated to English, children’s folk tales from the region, and a unique selection of English-language books on Russia and former Soviet republics.

In 1971, Vladimir Azar opened Globus at 332 Balboa street. Passionate about his first language and Russian culture, he also started Globus Publishing House and Printers, specifically meant to publish works by the Russian immigrants who arrived in the United States during the so-called first and second immigration waves.

The seasoned title-hunting team here is well-known on the rare book market for their expertise in first editions of Russian literature, books on the Russian avant-garde, early imprints and travel and voyage books. They do accept orders for the search for rare and short-run publications. 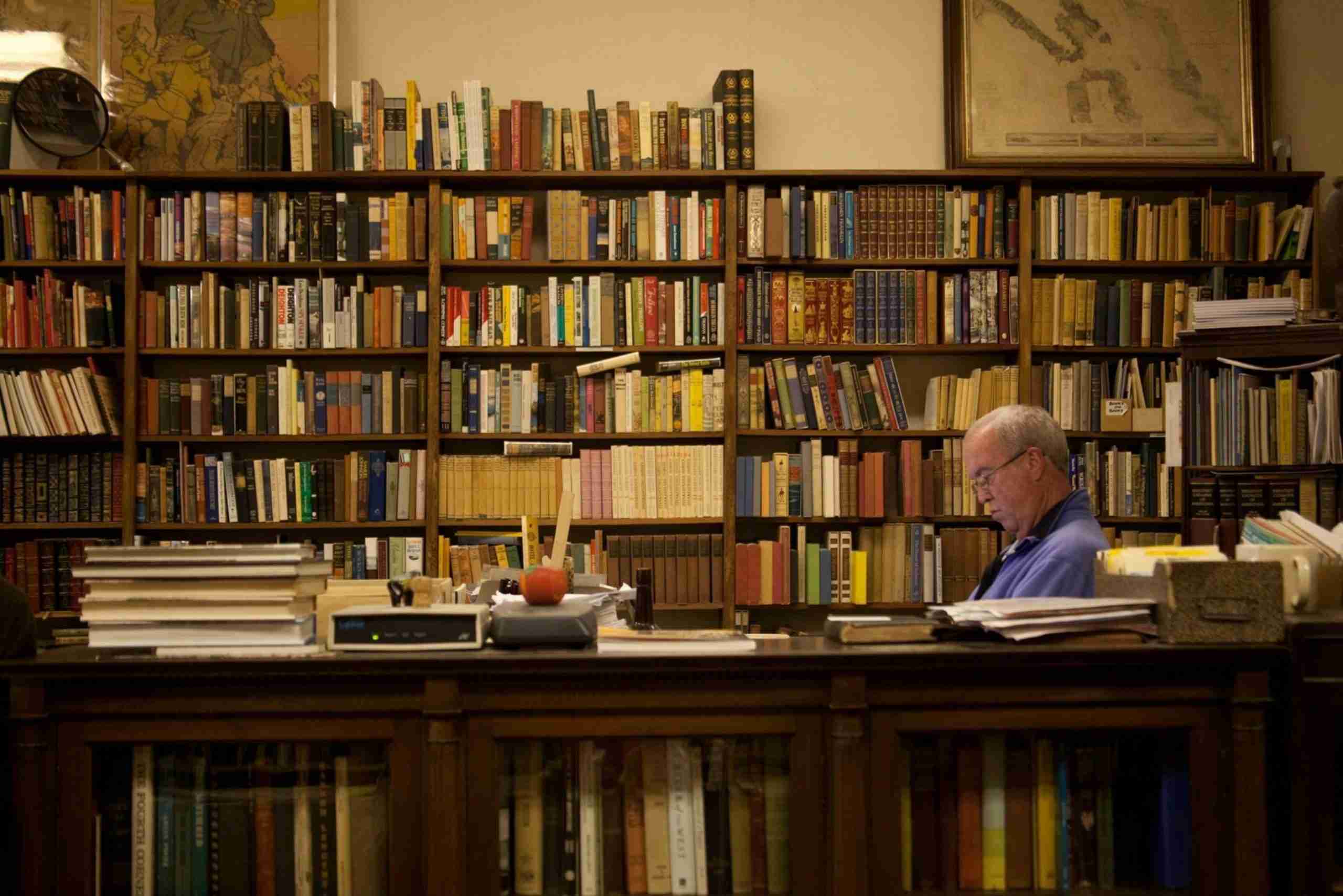 A family-run bookshop specializing in Western Americana, California, and San Francisco history, Argonaut likewise carries a wide selection of rare books, prints, maps, and ephemera in other subjects. Many of their titles were printed between the 15th and 19th centuries, making this place the ultimate treasure hunt for collectors.

The business was started by Robert D. Haines on Kearny Street in San Francisco in 1941. His son, Robert D. Haines, Jr., joined him in the late 1960s, and in 1969 the shop moved to its current location on Sutter Street. Robert’s daughter Angela joined the business in 1998, as the third generation to work in the family business.

The proprietor of The Green Arcade was for many years the buyer for the largest progressive bookstore in the country and was inspired as a young teen by the first Earth Day. He’s stocked the shelves of this charming abode with progressive titles regarding San Francisco, the built & natural environment, politics, social justice, food & farming, sustainability, and a number more topics.

Being on Market Street proves advantageous as The Green Arcade is highly visible; bike and Muni routes practically go right up to the front door. When the right protest shuffles on by, you may even see the staff scramble from their seats and take to the streets! 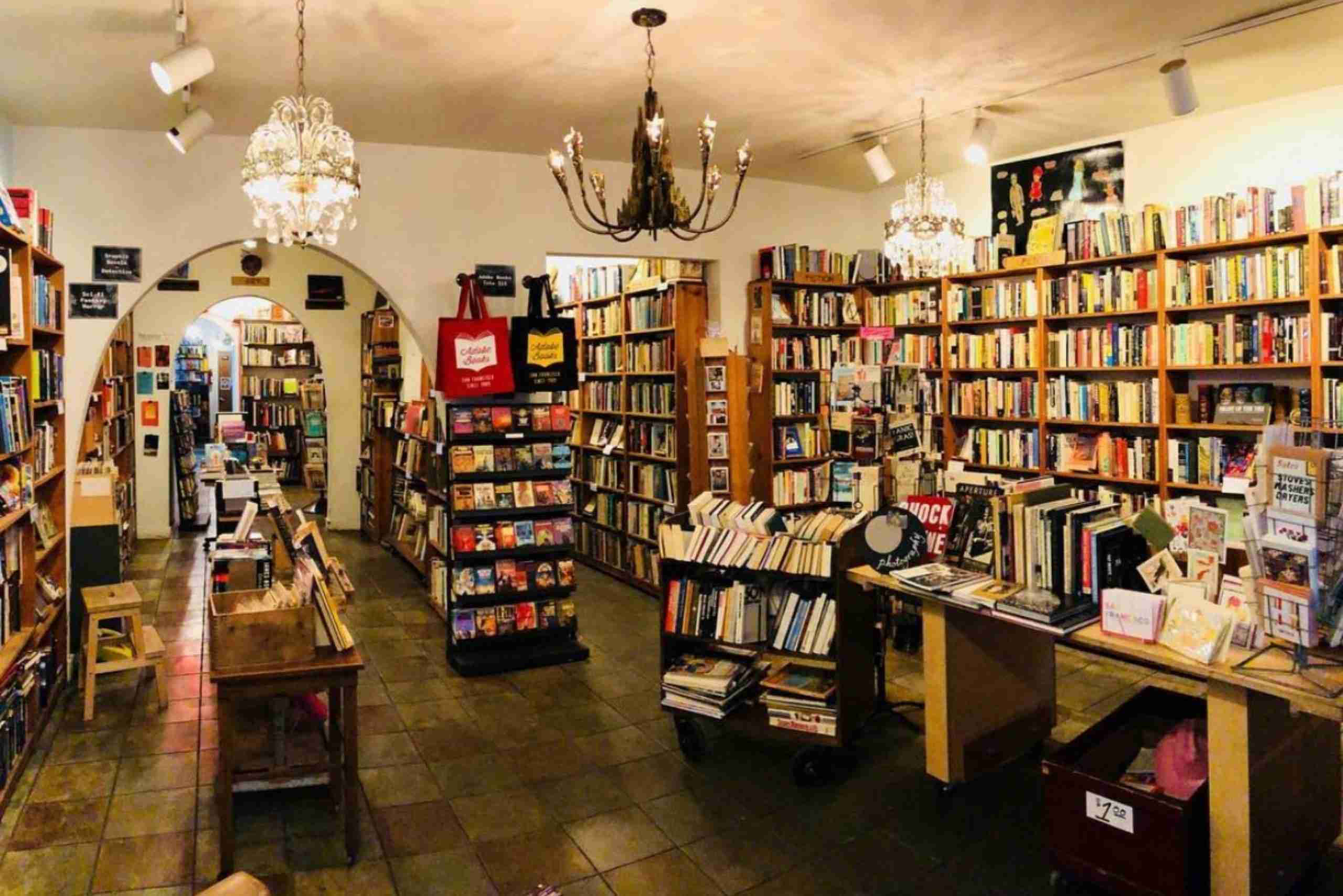 Known affectionately as The Living Room of the Mission, Adobe Books and Arts Cooperative (“Adobe Books” or “Adobe”) was founded in 1989 by Andrew McKinley. Perhaps most accentuated by glimmering chandeliers, funky tile flooring, and last but certainly not least, art pieces adorning the walls, this sacred creative space among San Francisco bookstores serves as a bohemian nexus for a large and rotating cast of artists, musicians, writers, readers, thinkers.

Local bands even occasionally play shows in the store so stop in, say hello, get your groove on, and don’t forget to buy a book!

A local treasure tucked away in the hamlet of glen park, Bird & Beckett is just floor to ceiling books and records, and then, of course, there’s the professional-grade staging and concert equipment smack dab in the middle of this operation. That’s right, they sell books and edify the community with 25-30 music and literary events every single month – good luck finding that anywhere else in the special city by the bay. 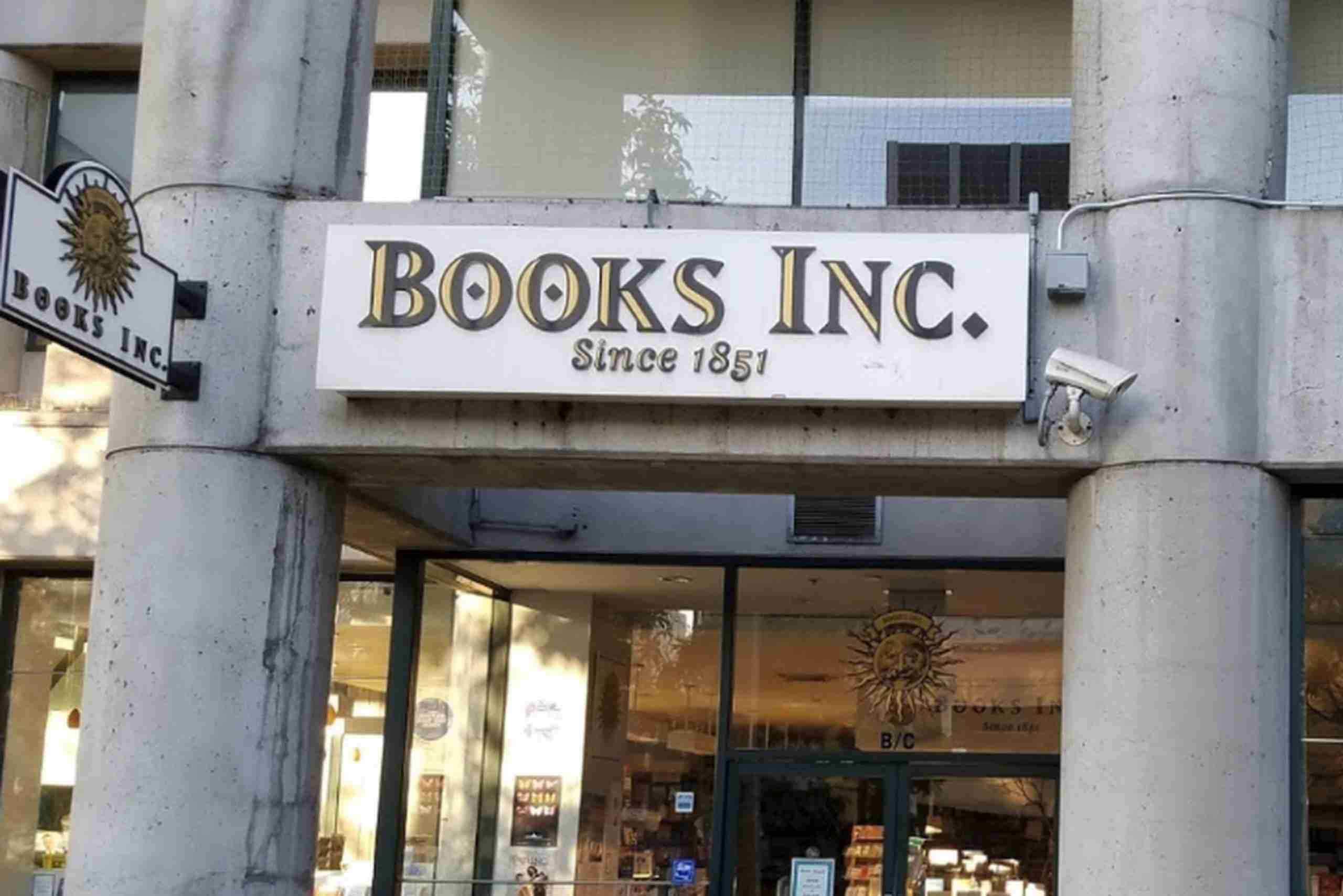 With a presence throughout the bay area, Book Inc’s literary outposts are new title-laden bulwarks among independent San Francisco bookstores. Not just that, they also host all sorts of book clubs like the appropriately named children’s storytimes, “women we’d like to lunch with book club,” and adventurous readers club; the cement blanketed Opera Plaza location – pictured above – organizes an engaging world affairs council book club.

This company’s origins date back to the Gold Rush Days of 1851 when Anton Roman struck it rich in Shasta City, California and set himself up in business selling books. That small book shop was moved, bought, sold, burned, rebuilt, renamed and ultimately became Books Inc., as we know it today, in 1946.

Now boasting 10 stores and around 200 employees, Books Inc. serves as a shining example that independent booksellers can survive and prosper, even if they must dance among the elephants.

If you enjoyed this guide to the best independent San Francisco bookstores, be sure to check out our list of San Jose and San Mateo bookstores!