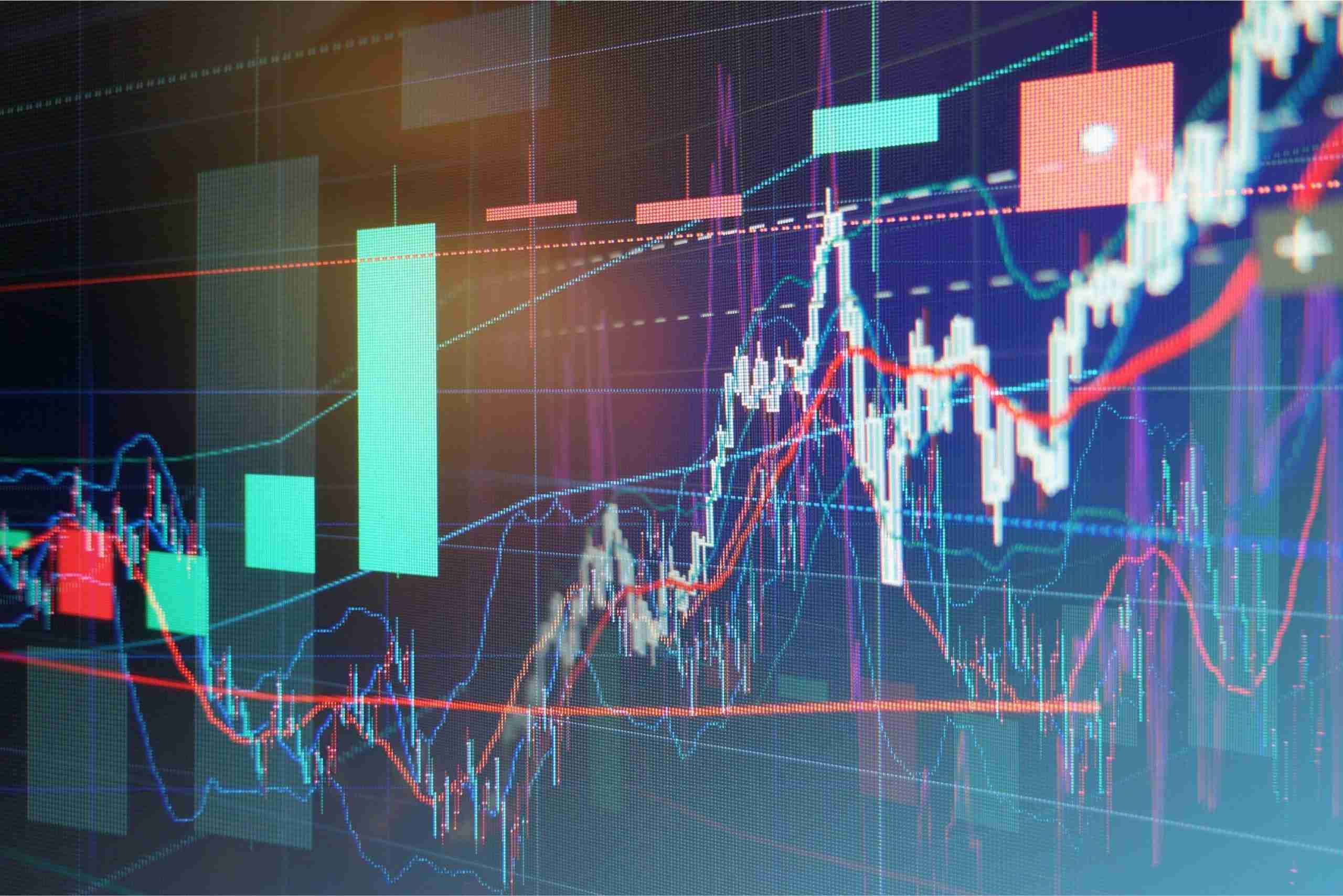 In the realm of technical analysis in finance, a technical indicator refers to a mathematical calculation or pattern signal based on the historic price, volume, or open interest of a security or contract that attempts to forecast financial market direction. When it comes to swing and day trading, short-term investors keep track of these technical indicators as they generally overlay on price chart data to indicate where the price is going, and moreover, whether the shares are currently being overbought or oversold; which then provides the informed investor the advantage of making an analytically driven decision to buy or sell a stock.

There are various types of technical indicators and new variants continue to be developed by traders with the aim of getting better results. Keep in mind, the figures provided by indicators do not take into account the most important fundamentals of a business, such as earnings, revenue, profit margins, or leadership.

Influencer investor Ricky Gutierrez believes it’s best to tactically leverage all that combined indicator data against even more market factors that may be much tougher to predict, in other words, traders should not use any individual indicator as the sole basis behind purchasing or selling a stock. Without further ado, we bring you the 15 technical indicators that every day trader should know.

A support level is a horizontal line that identifies the price where a stock tends to find support as it falls. This means that the price is more likely to recover from this level rather than break through it and continue declining. However, once the price has breached this level, it is reasonably likely to continue falling until meeting a new, lower support level.

Developed by J. Welles Wilder, the Relative Strength Index (RSI), is a momentum oscillator that measures the speed and change of price movements. For contextual purposes, an oscillator is a technical analysis tool that constructs high and low bands between two extreme values, and then builds a trend indicator that fluctuates within these bounds. 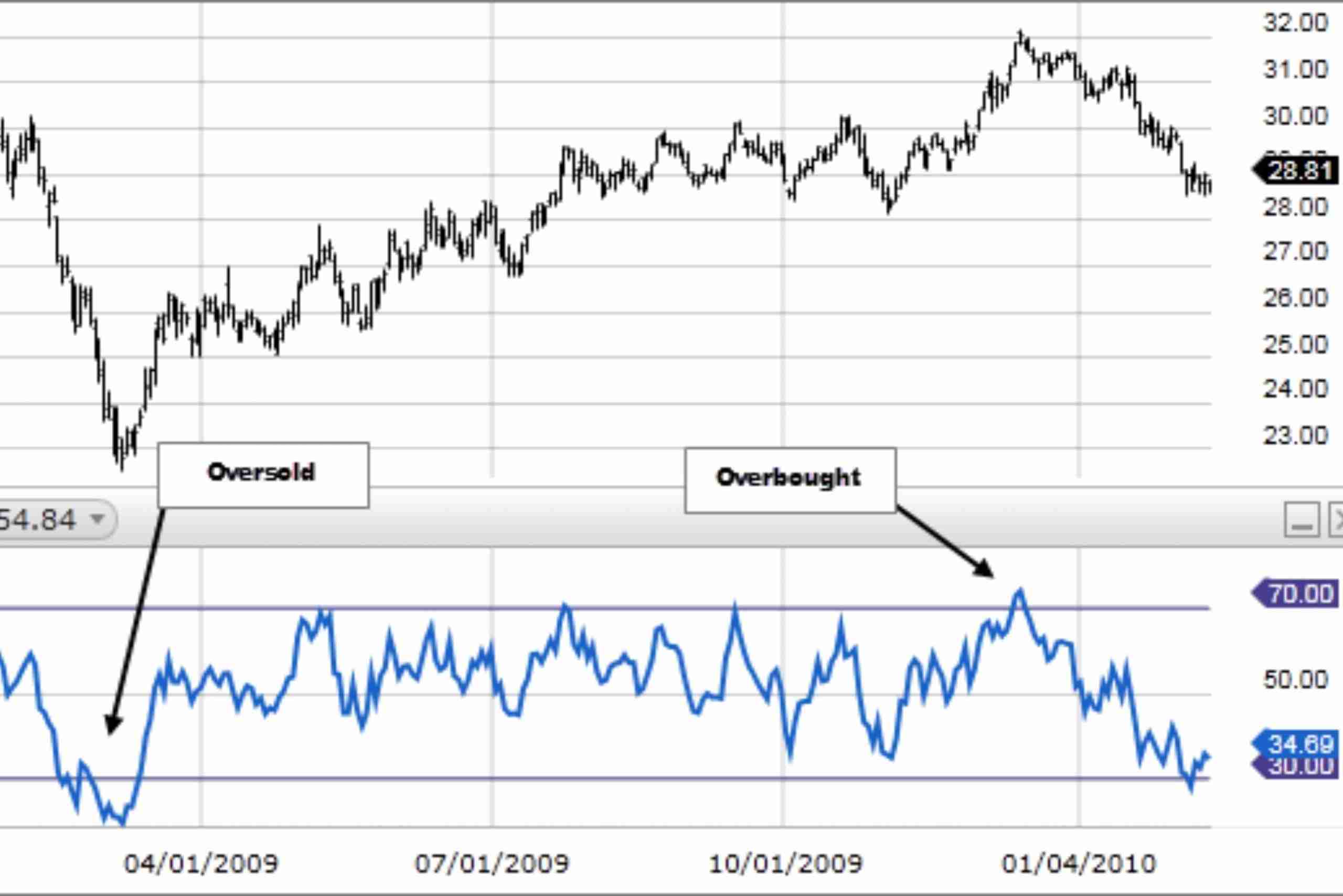 The RSI oscillates between zero and 100. Traditionally, the RSI is considered overbought when above 70 and oversold when below 30. Signals can be generated by looking for divergences and failure swings. RSI can also be used to identify the general trend.

An Exponential Moving Average (EMA) is an average price calculation over a specific time period that puts more weight on the most recent price data – causing it to react faster to price change. Day traders incorporate this indicator into charts to help determine trend, direction, and strength. 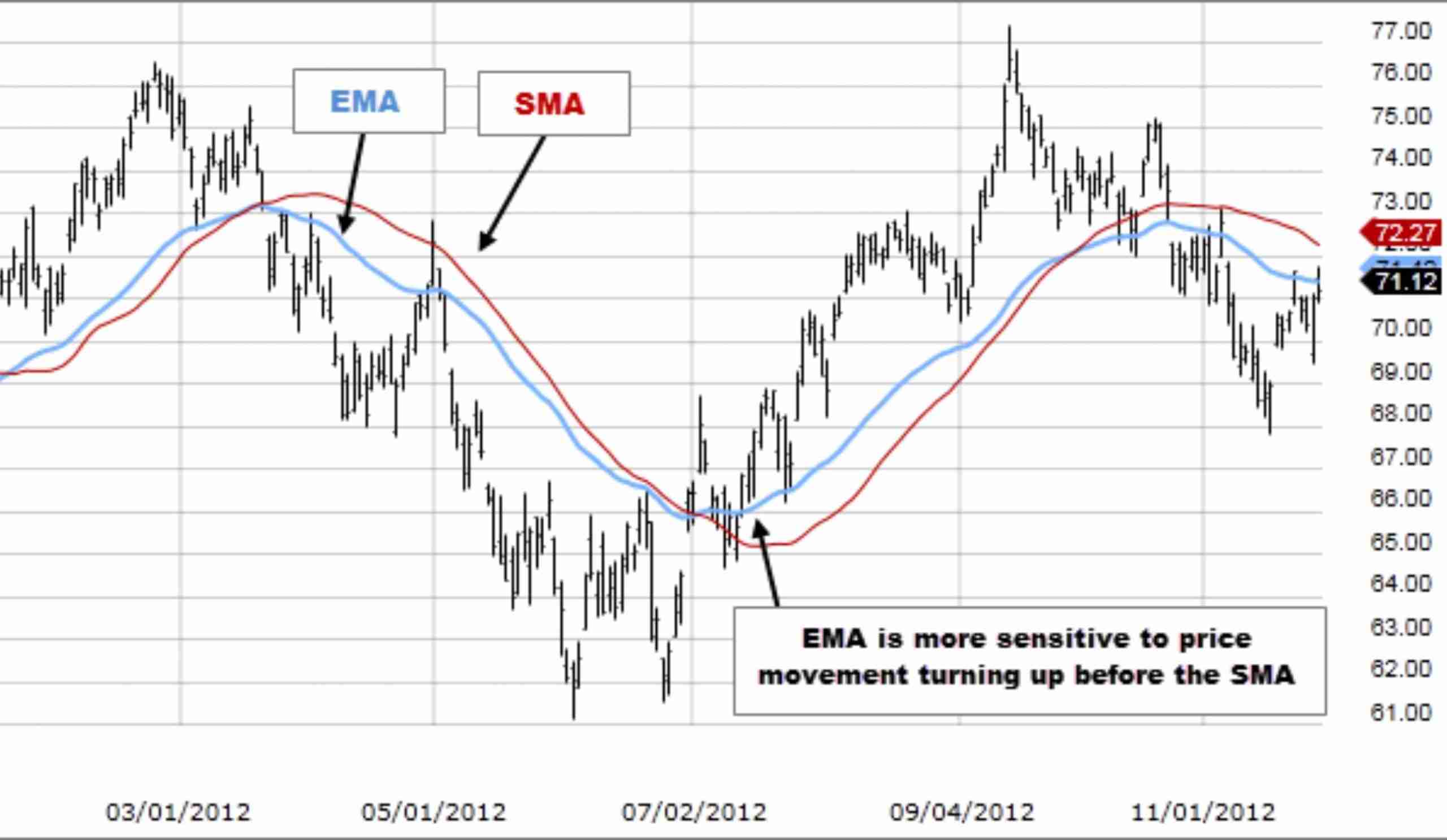 According to Warrior Trading, investors can rely on the EMA to generate buy and or/sell signals. This happens when one moving average crosses over another. EMA periods like the 20, 50, 100, and 200 can also work as support and resistance zones, which is the key to price action and profit in the market. Other traders use the EMA to track the primary trend. If the stock closes beyond the average, the trader exits the trade.

A Simple Moving Average (SMA) is an unweighted moving average. This means that each period in the data set has equal importance and is weighted equally. Even more simply, it’s a straightforward calculation of a stock’s average price – usually its closing price – over a set number of days.

Moving Average Convergence/Divergence (MACD) is a trend-following momentum indicator that shows the relationship between two moving averages of a security’s price, examines Investopedia. The MACD is calculated by subtracting the 26-period Exponential Moving Average (EMA) from the 12-period EMA. The result of that calculation is the MACD line. A nine-day EMA of the MACD called the “signal line,” is then plotted on top of the MACD line, which can function as a trigger for buy and sell signals.

Because his video describes this technical indicator far better than any text and graph could, we encourage you to check out how investor Ricky Gutierrez utilizes MACD while day trading:

On Balance Volume (OBV) refers to an indicator of momentum that utilizes the positive or negative flow of the volume of trading to reflect the relative buying and selling pressure on a financial asset, with the aim of predicting the probable direction of near-term price changes.

Joe Granville was a financial writer and investment seminar speaker who is most famous for creating and developing the concept of OBV. Granville argued that when volume increases sharply without a significant change in a stock’s price, the price will eventually increase rapidly, and vice versa. OBV is thus one tool of technical analysis that attempts to predict future prices of stocks, commodities, and other financial assets traded on financial markets for which historical price and volume information is available.

Developed in 1978 by J. Welles Wilder, the Average Directional Index is an indicator of trend strength in a series of prices of a financial instrument, translated more relatably, it reflects the gradual expansion or contraction of the price range of a stock over a period of time.

The Aroon indicator, developed by Tushar Chande, indicates if a price is trending, in a trading range, or is about to begin a new trend. AroonDown and the AroonUp indicators can be used together and when combined are called the Aroon indicator. 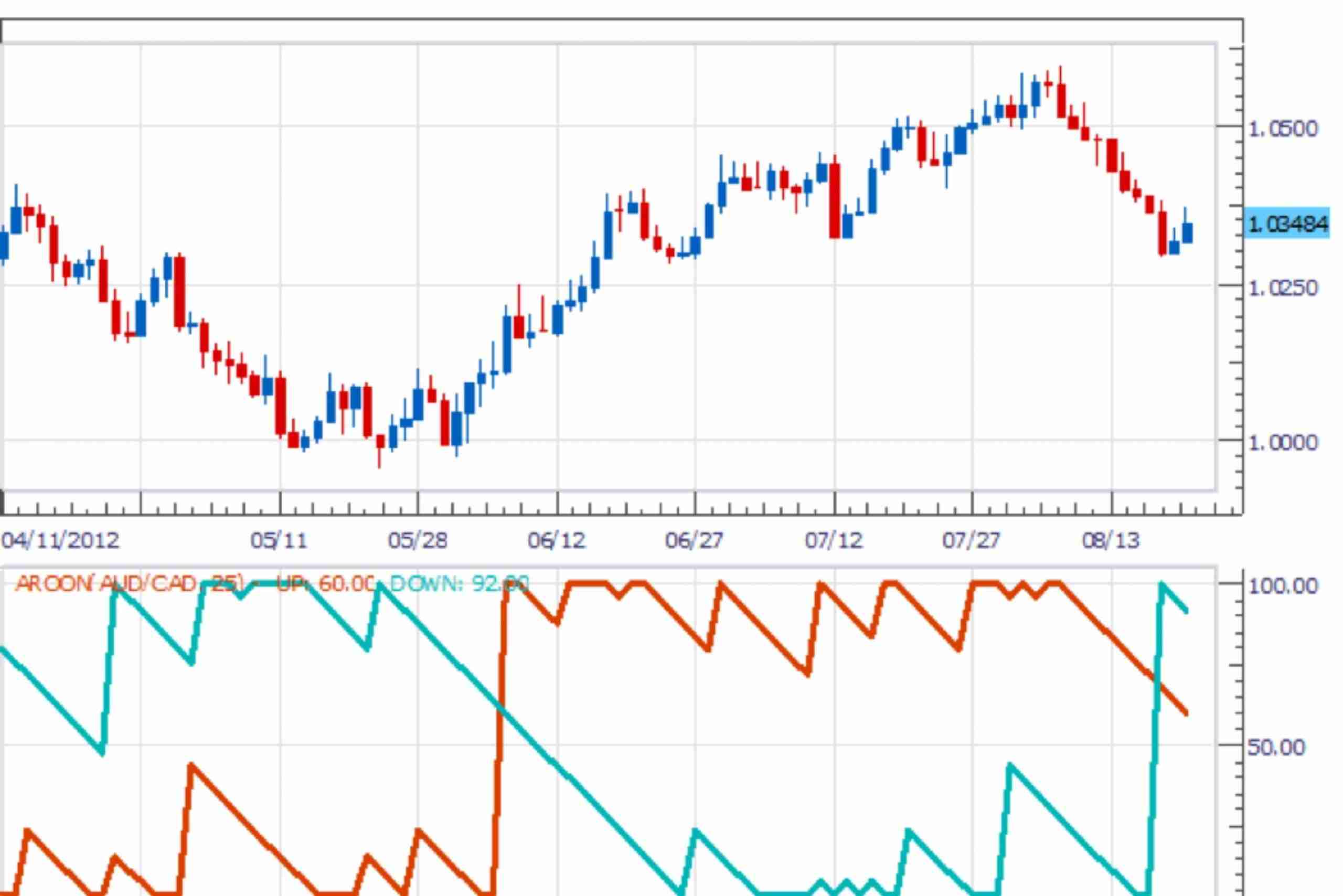 When Aroon-Up and Aroon-Down move in parallel (horizontal, sloping up or down) with each other at roughly the same level, then price is range trading or consolidating.

Popular among momentum technical indicators, the stochastic oscillator uses support and resistance levels. George Lane developed this indicator in the late 1950s; the term stochastic refers to the point of a current price in relation to its price range over a period of time.

This method attempts to predict price turning points by comparing the closing price of a security to its price range. It is often used for identifying overbought and oversold trading signals, utilizing a 0–100 bounded range of values.

Sentiment indicators are psychology-based and strive to quantify investor’s feelings toward the market in the form of figures or graphically, all in an effort to predict how current beliefs and positions may affect future market behavior.

Bollinger Bands are a technical trading tool created by John Bollinger in the early 1980s. They arose from the need for adaptive trading bands and the observation that volatility was dynamic, not static as was widely believed at the time. The general principle is that by comparing a stock’s position relative to the bands, a trader may be able to determine if a stock’s price is relatively low or relatively high. Charles Schwab adds, the width of the band can be an indicator of its volatility (narrower bands indicate less volatility while wider ones indicate higher volatility).

The Ichimoku Cloud is a collection of technical indicators integrated to form a type of chart used to display support and resistance, momentum, and trend in one view, while simultaneously combining then mathematically calculating these data points to form a “cloud” that, in theory, portrays where future support and resistance levels may occur. 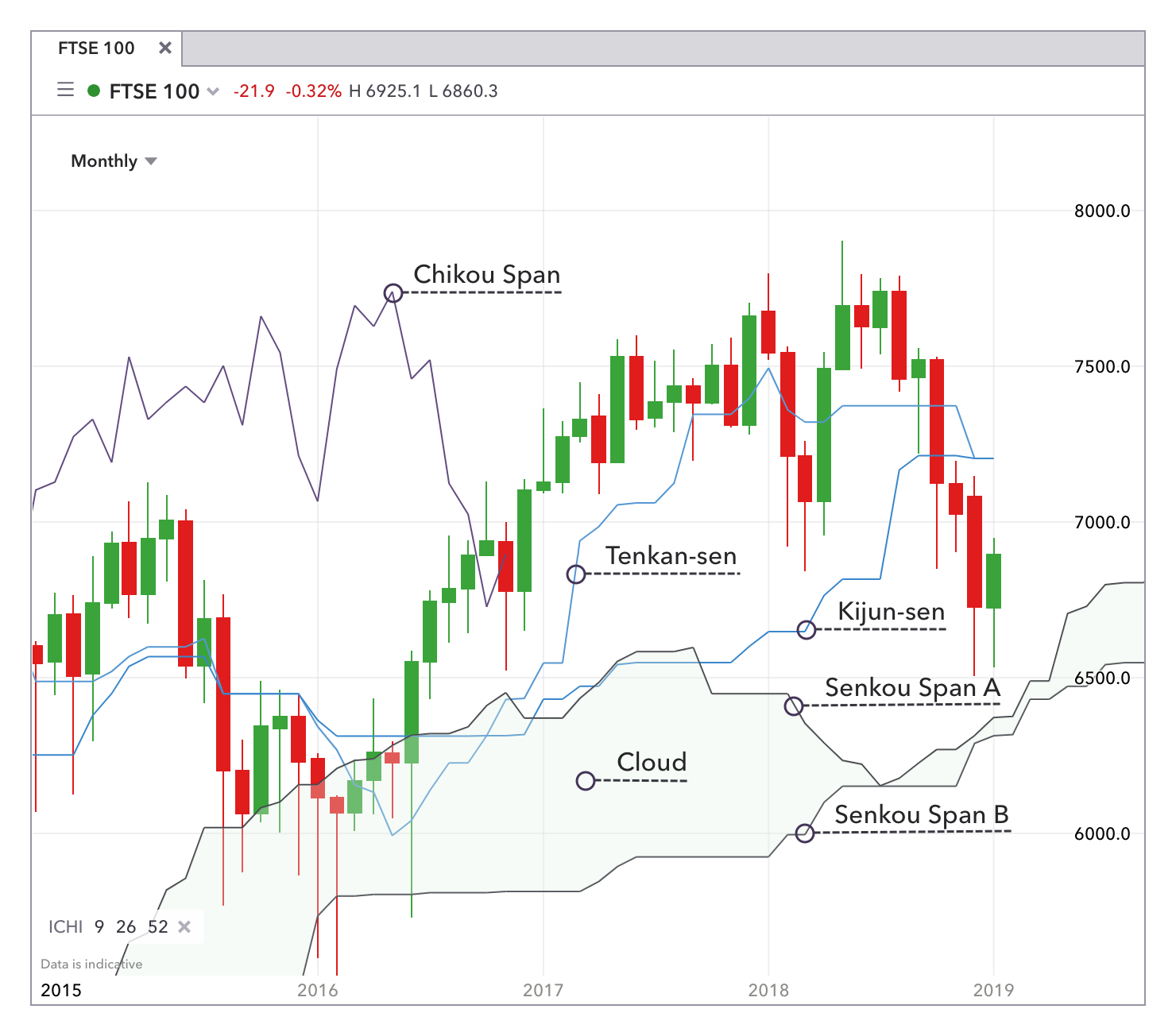 Fibonacci retracement is a method of technical analysis for determining support and resistance levels. It is based on the idea that markets will retrace a predictable portion of a move, after which they will continue to move in the original direction. 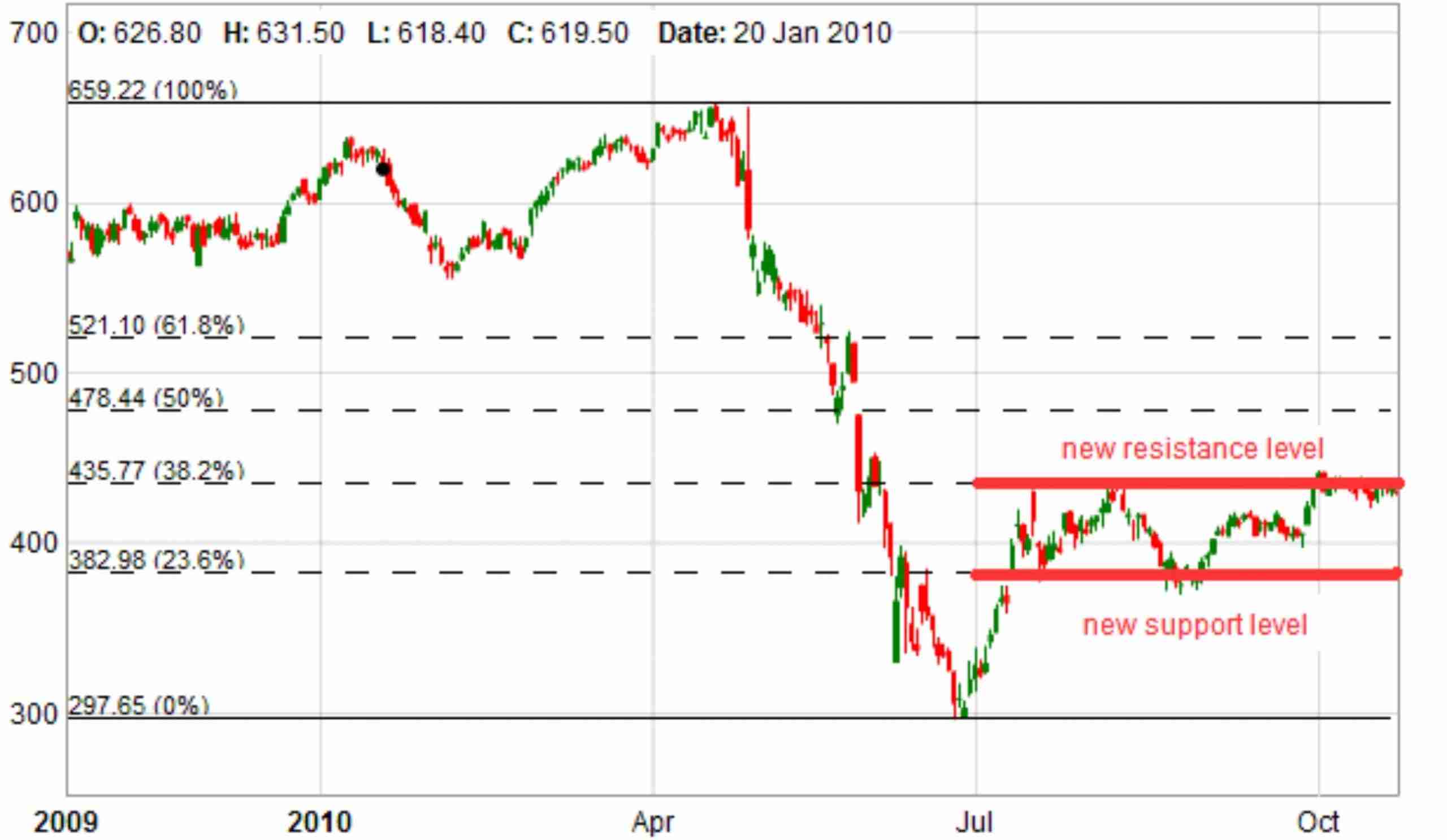 If you enjoyed this guide to the best technical indicators, be sure to check out our list of Day Trading Rules that beginners should know.