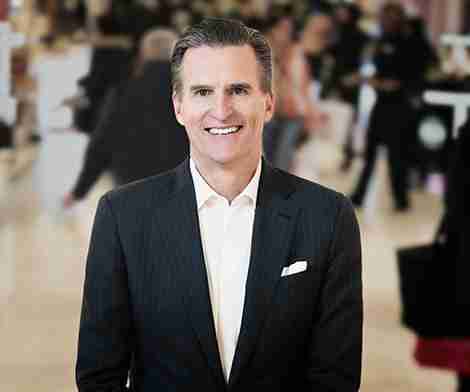 Jeff Gennette was born in San Diego, California, and grew up in a suburb of the city known as El Cajon. The youngest of four siblings, his mother was a nursing instructor and his father a history teacher. Reading became a passion of his at an early age.

He got his first job at a local shop that sold mopeds when he was just 16 years old. “I loved it, there was a commission, and I never looked back,” he says. With college around the corner, the steady shifts gave him an opportunity to save up for his eventual prestigious undergraduate landing spot, Stanford University.

“I didn’t know what topsiders were until I went to Stanford,” Gennette told the Wall Street Journal, referring to the popular Sperry boat shoes. Not long after arriving on campus, he earned a living by bussing tables at the university’s Faculty Club, with time he worked his way up to a manager position.

Despite studying English in his coursework, Jeff grew more and more comfortable with coordinating the day to day operations of a service industry store. Well into his collegiate experience, he still wasn’t sure what he wanted to do professionally.

With graduation approaching, Stanford arranged for a multitude of employers to visit the school and meet his class of top-notch students. “All the different companies that came courting would require points to get an interview; for example, IBM could cost you 400 points and you had a total of 1,500 points you would be able to use,” explains Gennette. “The Macy’s interview was free and it was sort of considered the ‘practice’ interview.”

Little did he expect so promising a conversation to take place with the iconic retail corporation’s recruiter. Swept up in the magic of Macy’s, Jeff found himself admitted into their executive training program that’s meant to mold bright young talent into industry leaders.

He’d ultimately graduate from Stanford University in 1983. “Where Stanford prepared me,” he says, “was in critical thinking, and the ability to manage strategy and communication.”

His first year and a half with the company would be spent as a sales manager no further than the floor of the Macy’s store on Stanford’s campus. “I originally thought I was only going to stay that year and a half,” he remembers. “I thought I would get in, get out, and go to business school. That was kind of the plan.”

While speaking with Mark Weber, radio host of Always in Fashion, Jeff Gennette reveals that two seminal moments occurred during his tenure at the university’s location that would forever change the trajectory of his career. He prefaces these stories by noting how addicting it can become to work in retail, especially when considering the immediate gratification one can receive from customers as a result of same-day efforts. “It’s like a narcotic,” he believes.

“I had a thing called the tiger shop, it was young men’s. We had like thirteen fixtures on this floor and a back wall. One day, the Kingston Trio – which was this short-sleeve candy-striped woven – came in, in three colors. I started to notice that by the end of the day, like 40% of the supply on the back wall was gone,” Gennette reminisces. “The customer found the far reach of that area and they bought this content. So I brought it up to our buyer at the time, I called her and said, ‘these are selling like hot cakes, send me more.'”

As more product poured in, this little fixture he had set up in the corner of his store ended up producing 50% of Macy’s entire tiger shop woven’s business in California.

“The second instance, I had a sales colleague who worked for me, and she was like this salty fisherman’s wife out of Manchester, England. She was in her mid-60s, saw my work, and basically told me, ‘you’re doing it all wrong,'” he recalls, before praising how valuable a mentorship this woman provided. “She kicked me up one side to the next and showed me what it was like to be an exceptional manager.”

Early in his career, Gennette took a brief break from Macy’s and served as a store manager for FAO Schwarz and director of stores for Broadway Stores, Inc.

Over the course of his career with the American retailer, he rather notably spearheaded efforts to increase floor space for and put greater marketing dollars towards what he identified as five “power brands;” those being Ralph Lauren, Calvin Klein, Tommy Hilfiger, Michael Kors, and the private label INC.

Attracting a larger demographic of millennial customers, Gennette helped pave the way for Finish Line and LIDS Sports Group to lease space within stores in order to sell their sneakers and comfortable sports apparel. A more photo-worthy endeavor was his transforming the basement of Macy’s flagship Herald Square into an artistic selfie wall haven that could grace the accounts of social media users visiting the big apple from all over the world; this strategic design not only brought young folks into the building but also afforded the company free marketing via online posts that were made by them.

He also expanded Macy’s bridal registry, intending to welcome new couples tying the knot. “We believe we can be the wedding destination,” he said to the New York Times. “It starts with the ring and goes all the way to your first house and kid. We believe we can be a one-stop shop for that.”

Gennette was serving as chief merchandising officer when in 2014, he was promoted to President of Macy’s. The move hinted at his future chief executive status as the role was typically reserved for the company’s CEO, who also functions as chairman.

“I’m O.K. with going down to three titles,” Terry Lundgren, Gennette’s predecessor, said while reassuring reporters he planned on being around for years to come. “As of yesterday, I was chairman, president, C.E.O. and most importantly, chief customer officer of the company.”

Lundgren had been chairman and chief executive officer of Macy’s, Inc. since January 2004, and also served as president and CEO from February 2003 to March 2014. Prior to 2003, he was president and chief merchandising officer as of May 1997.

In early 2017, Macy’s sales made it the biggest department-store chain in America. Over the last two decades, however, the industry itself has been eaten away at by a diverse array of competitors such as fast-fashion retailers, discount chains, and online businesses. Profits fell 42% to $619 million on a nearly 5% drop in sales for the year prior, the second consecutive year in which Macy’s sales and earnings shrank.

Hoping to breathe modern life back into the struggling brand, March of 2017 saw the Macy’s board of directors put out a press release confirming that, effective immediately, Jeff Gennette would be the company’s next CEO.

“It’s a very meaningful day for me as I take on leadership of the company I’ve worked for and the colleagues I’ve worked with for more than 30 years. I’m honored to be taking on this role and excited about Macy’s prospects. While we certainly have our challenges, we also have great assets and opportunity. No company is better up to the task of re-invention than Macy’s,” Gennette said in a statement.

“Jeff will be a terrific CEO for Macy’s, Inc. He has a deep knowledge of this company, coupled with the vision and determination to continue Macy’s transformation for the next generation. Jeff has a proven track record as a successful retail operator, seasoned merchant and business leader and has contributed significantly to the company’s long history of success,” said Lundgren.

Gennette’s primary focuses have been to inject more entertainment value into the shopping experiences and better procure the quality of clothing available in stores, while also managing to stay true to the bargain discounts that their most loyal customer base depends on.

Data collected in 2017 indicated that roughly 10% of Macy’s 43 million customers accounted for half of its sales. “We’re trying to create the best of both worlds with an off-price/full-price environment,” Gennette explained to the Wall Street Journal.

In early 2020, the company announced plans to close around 125 of its least productive stores in the next three years and also cut about 2,000 of its corporate and support function positions. This round of closures should bring the number of Macy’s stores down to 400. “We will focus our resources on the healthy parts of our business, directly address the unhealthy parts of the business and explore new revenue streams,” said Gennette.

On the flip side, he is expanding the presence of Macy’s Backstage, a branded concept meant to compete with extreme discount retailers like T.J. Maxx. His team has also commenced with testing Market by Macy’s, a new format that will be smaller than a typical Macy’s store and carry the chain’s merchandise, as well as local goods and food. The new chain will open outside of malls in so-called lifestyle centers, with a first location arriving in Dallas, per the New York Times.

For information on how Macy’s is handling the economic effects of COVID-19, check out this conversation between Jeff Gennette and CNBC’s Jim Cramer:

Jeff Gennette is one of the very few openly gay CEOs working at the heights of corporate America. He and his husband enjoy games of scrabble and are raising a daughter in this crazy world we all share.

“I made a decision early in my career to be myself, openly gay, and while it was scary at first, I have never looked back,” he tells WWD. “Bringing your whole authentic self to work gives others permission to be themselves and there is power in that authenticity. It breaks down barriers. It builds trust. And trust is the essential ingredient in a productive work relationship.”

“Diversity at all levels is important – from front-line colleagues to the board of directors,” Gennette continues. “It keeps your customers’ voice in the room. When you don’t have diversity of perspective, there’s a bigger risk of disconnect from the customer.”