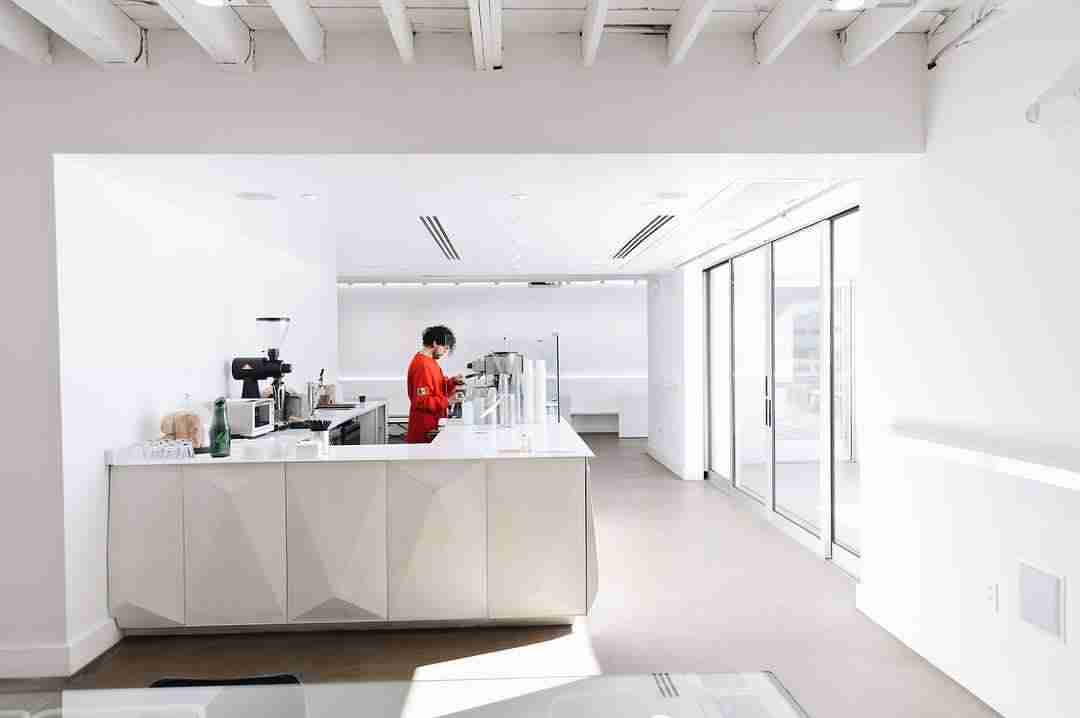 Palabra is an intensely minimalist art collective, hair salon, and cafe all wrapped into one just off Roosevelt Row. Transforming what used to be a children’s school into a matte white gallery only accentuated by fortuitously cracked cement floors, the lack of color at FUTURO allows a sensory emphasis on paintings, as well as, premiere Spanish-inspired coffee. It’s safe to say, whatever the beverage ordered here, the attention to detail per ingredient is second to none. Literally, whatever you’re consuming is probably the most elaborately conceived version of that food or drink there ever was. 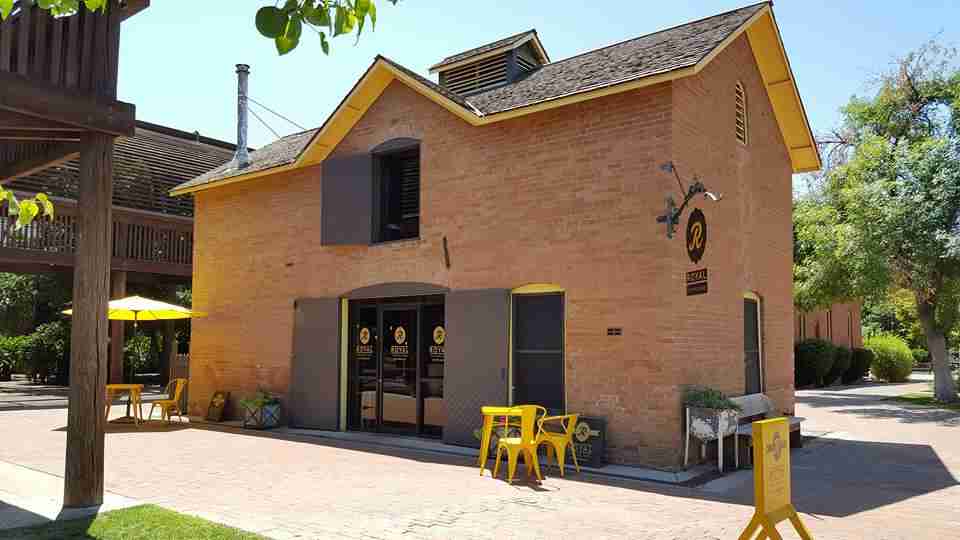 Founded in 2006, Royal Coffee Bar is family owned and humbly provides fresh, unpretentious coffee and espresso drinks in classic European style. A significant portion of the operation, including roasting, takes place under the roof of a quaint historic Heritage Square carriage house built in 1899. Each of their locations has been known to employ baristas that take coffee quite seriously, never hesitating to remake an entire drink with a fresh batch of beans for the sake of quality joe. Don’t forget about the delicate loose leaf teas, perfectly balanced spicy chai, or heavenly pastries they offer amidst the serenity of this well-manicured cottage in the park. 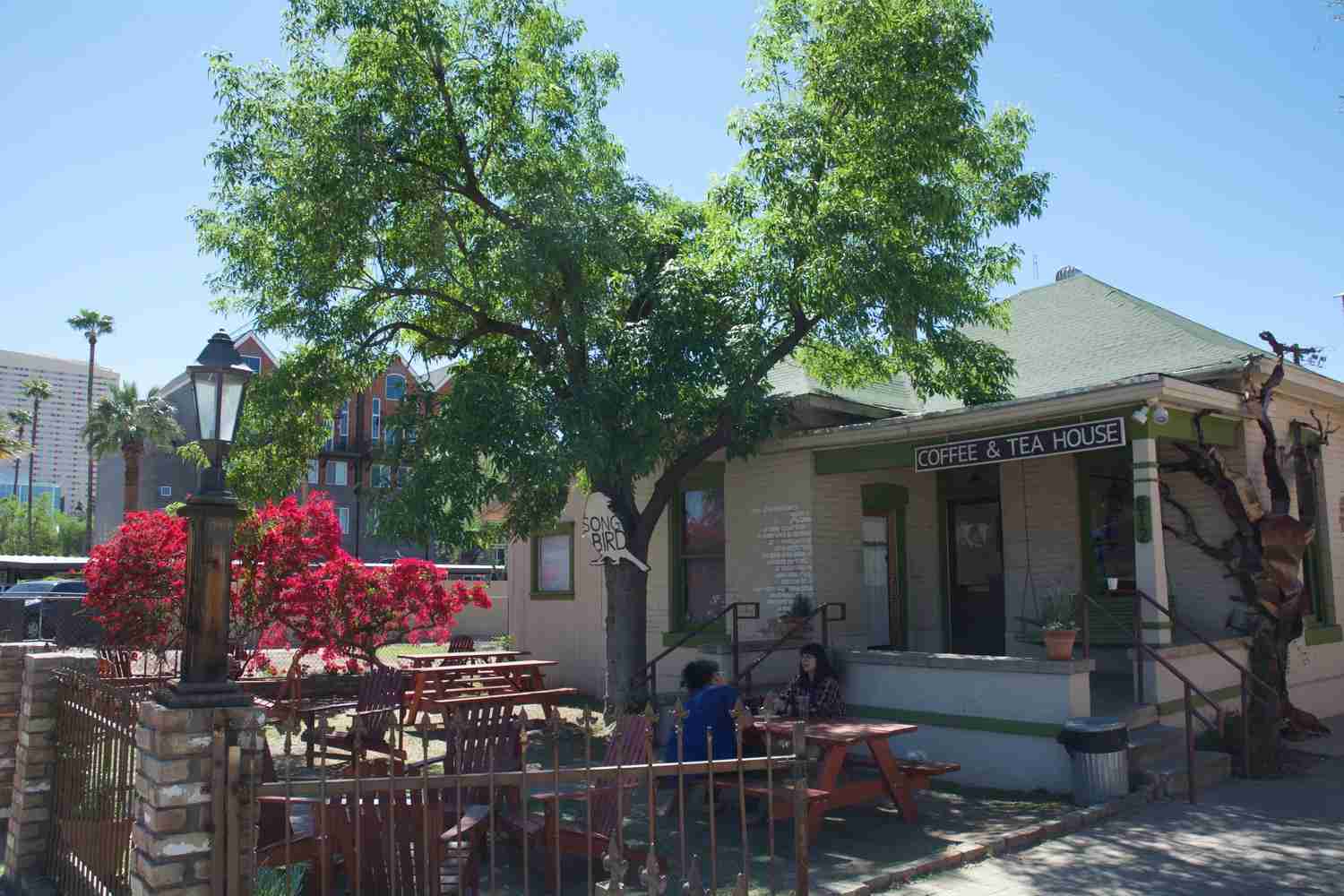 Residing within a historic home built along Roosevelt Row at the turn of the 20th century, Songbird Coffee & Tea is the ultimate community gathering space where all are welcomed with warmth and grace. Their picnic table dappled outdoor patio is shaded by the likes of a cheerfully shaggy tree, meanwhile inside, there exists the sort of living room coziness that we can only tend to enjoy at our own lodgings. Be prepared to run into local artists, writers, graphic designers, and if you’re lucky, maybe even a performer as this part of town has come to be celebrated as Phoenix’s most vibrant arts district. 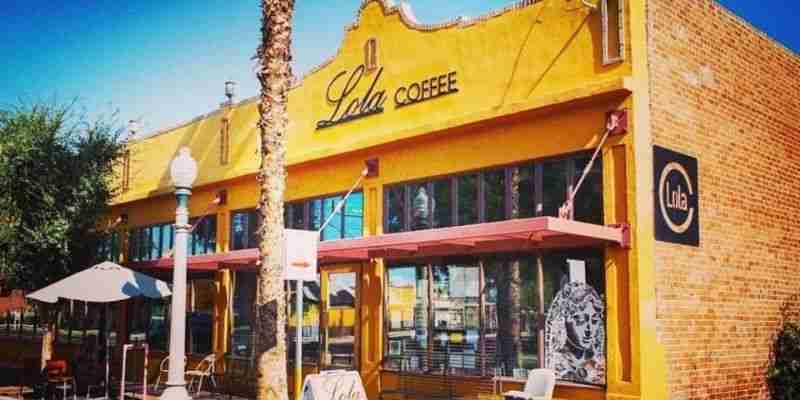 Daniel Wayne began his journey in the coffee business with a 6-foot Espresso cart in front of Phoenix’s Hub Building – he used to eat 59 cent bean burritos every day just to get by. Those hard times are long gone as Wayne, along with his beloved staff, now operates one of the most iconic cafes downtown. Lola’s has been a local favorite for the last decade, whether it’s their cool outdoor patio, spacious interior, cinnamon tinted choco Matador on ice, or delicious breakfast menu, there’s a little bit of something for everybody to fall in love with here. 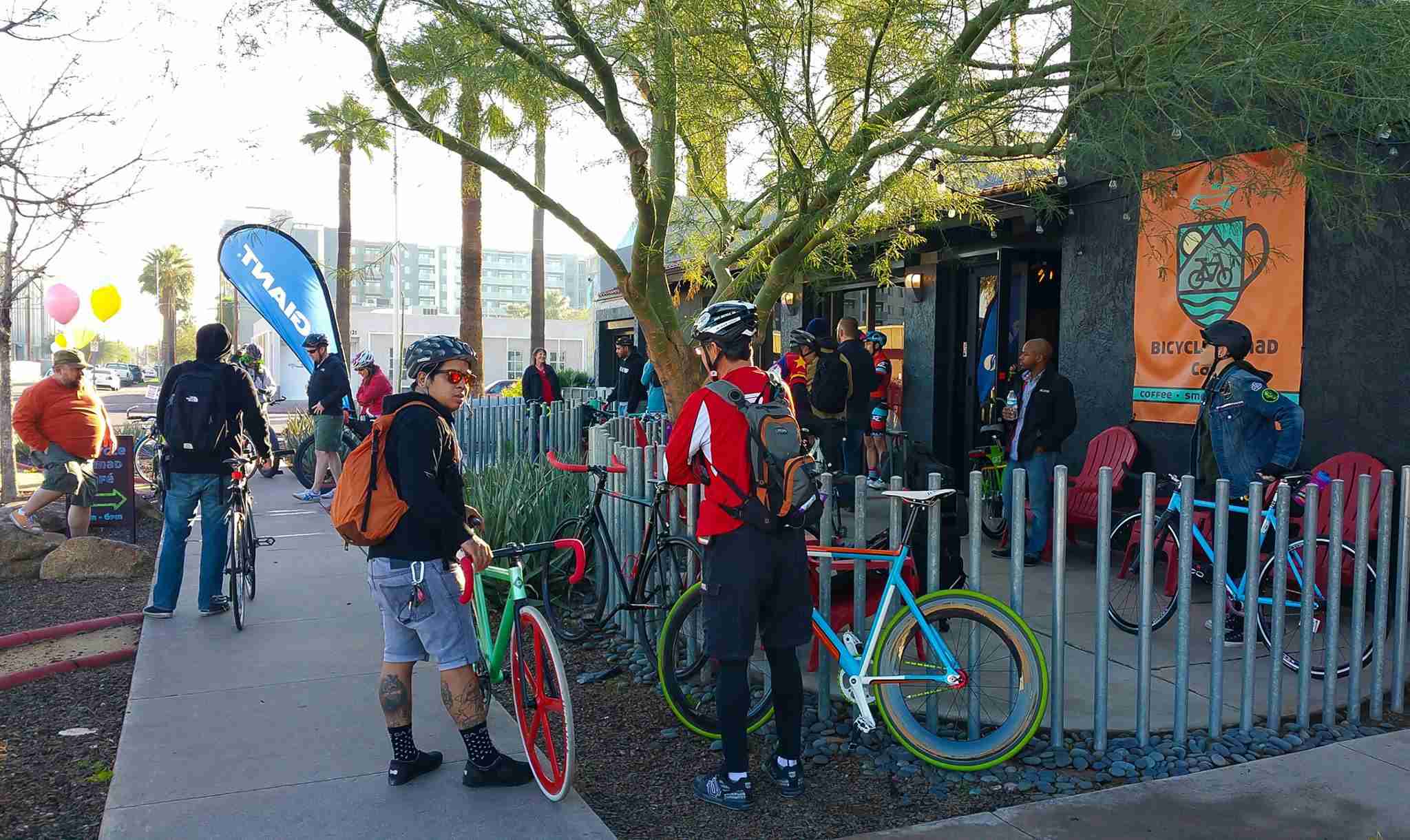 Bicycle Nomad Cafe is the brainchild of a man who considers biking: magic in motion. Erick Cedeno has spent his life pedaling into the future, from Vancouver, Canada to Tijuana, Mexico; from St. Augustine, Fla., to New York City, NY. His most notorious ride to date was along The Underground Railroad path, which he rode from New Orleans, LA to Niagara Falls, NY. He is a self-described nomad who finds that living in the moment has always kept him moving forward, regardless of how many thousands of miles have gone by or are waiting over the horizon.

Cedeno has infused his travels and unique experiences into this coffee shop, for instance, the Cocospresso is made with Thai coconut water and served cold inside a coconut – just like it was when he first discovered the concoction during a trip to Jamaica. In addition, the shop frequently organizes social bike rides for community members to mingle, exercise, and basque in the easy pleasures of pedaling a few city blocks. 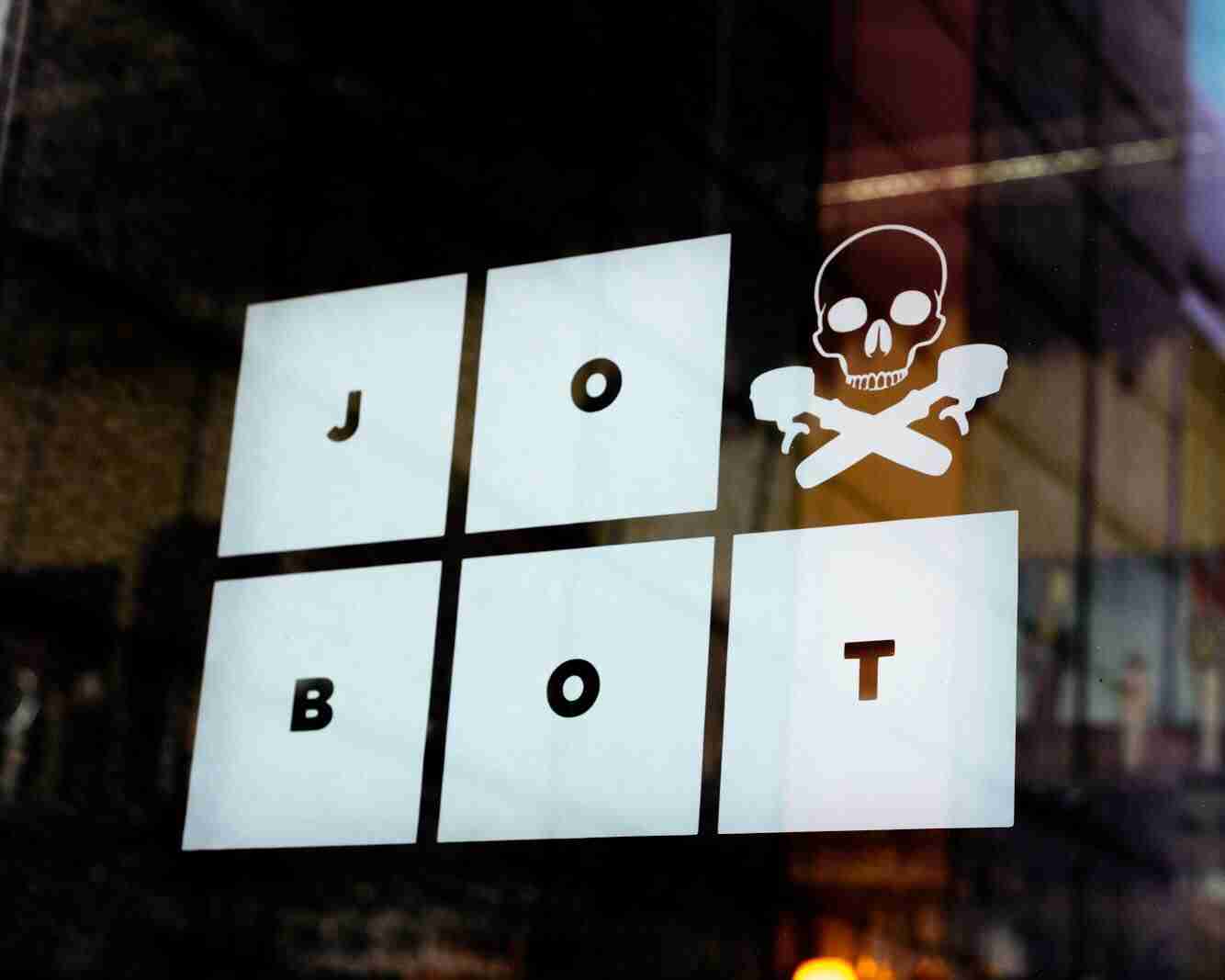 Located on Roosevelt St., Jobot Coffee & Bar is yet another uniquely glorious cafe in the Phoenix arts district. Grungy, ghouly, and open until the wee hours of the night, they serve locally roasted Cartel coffee alongside scrumptious crepes by morning and the devil’s water with tangy Dim Sum by twilight. If a refreshing craft cocktail isn’t your idea of cooling down in the heat of this desert climate, then be sure to try their outrageously rich and creamy ice cream options, which include some flavors that drift towards strange and unusual; take “STONERS DELIGHT,” for example. 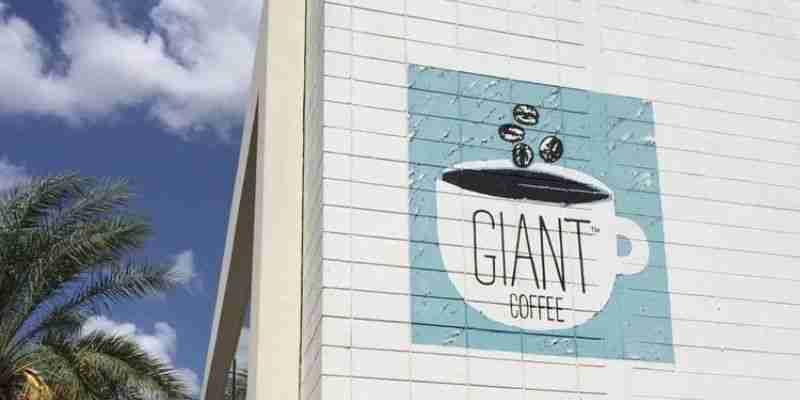 From the owners of the heart-throbbing breakfast joint, Matt’s Big Breakfast, Giant Coffee has in and of itself made a splash on the Phoenix cafe scene. Could it be the exclusive Four Barrel Coffee they serve that drives such a loyal following or how about their fresh-baked pastries that are 50% off after 3:00 pm, maybe even the fact that they have a location within a Sky Harbor airport terminal for travelers coming in and out of town? Actually, you know what, it’s probably as simple as the perfect vanilla latte, a caring staff, space to work, and some sweet tunes filling the air. 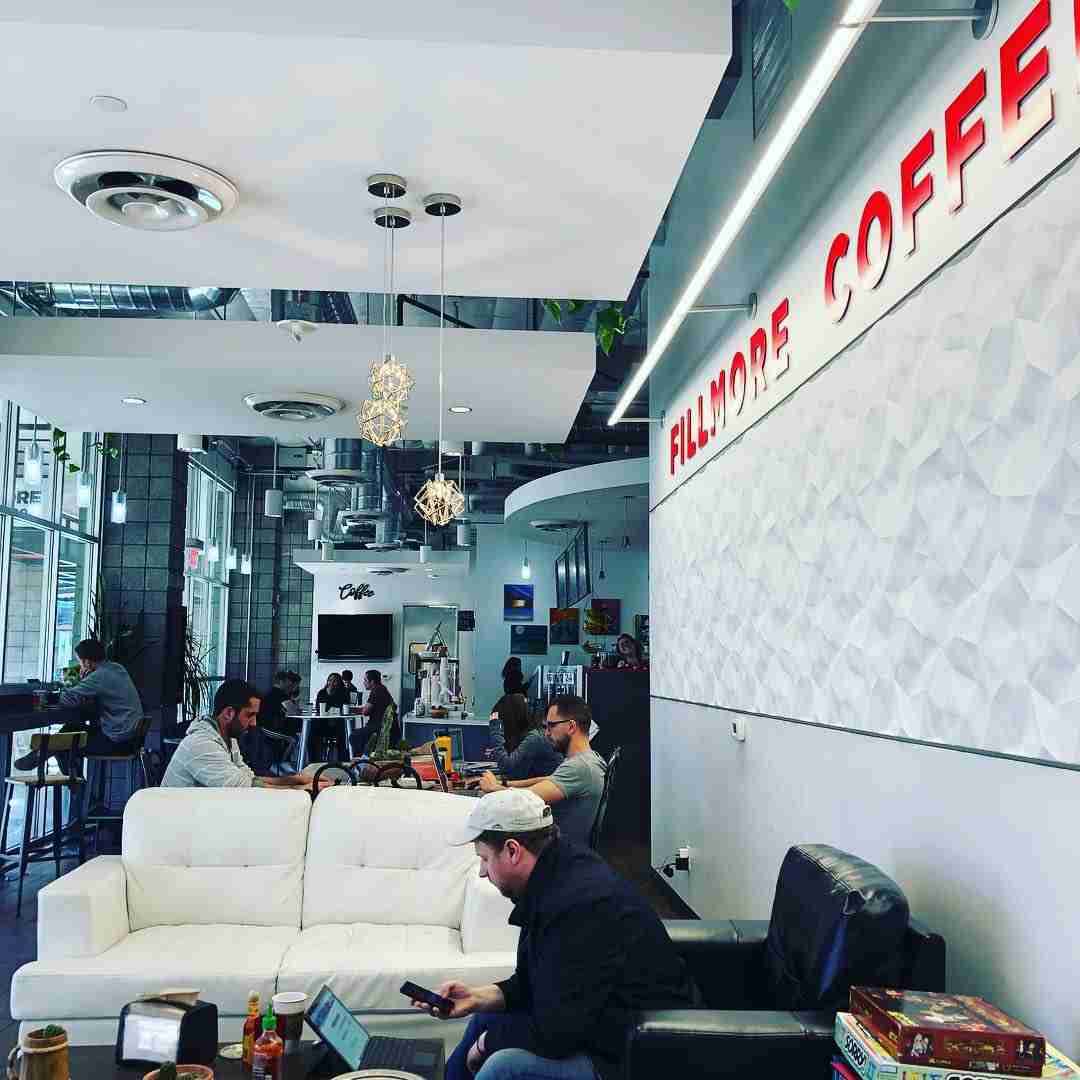 No crazy bells and whistles here, just two best friends who turned their big city coffee-making dreams into a reality. Tristen and Mike have collectively spent 25 years in the cafe industry, and now, their Fillmore Coffee Co. provides exceptional coffee using the freshest locally roasted beans. When it comes to food, breakfast is served all day and the wraps, along with everything else, get made in house and are absolutely delicious – that’s not to mention, the brekkie, an Australian infused sandwich you’d love to start your morning with. They are dedicated to serving healthy foods made with organic ingredients; vegan options are available! 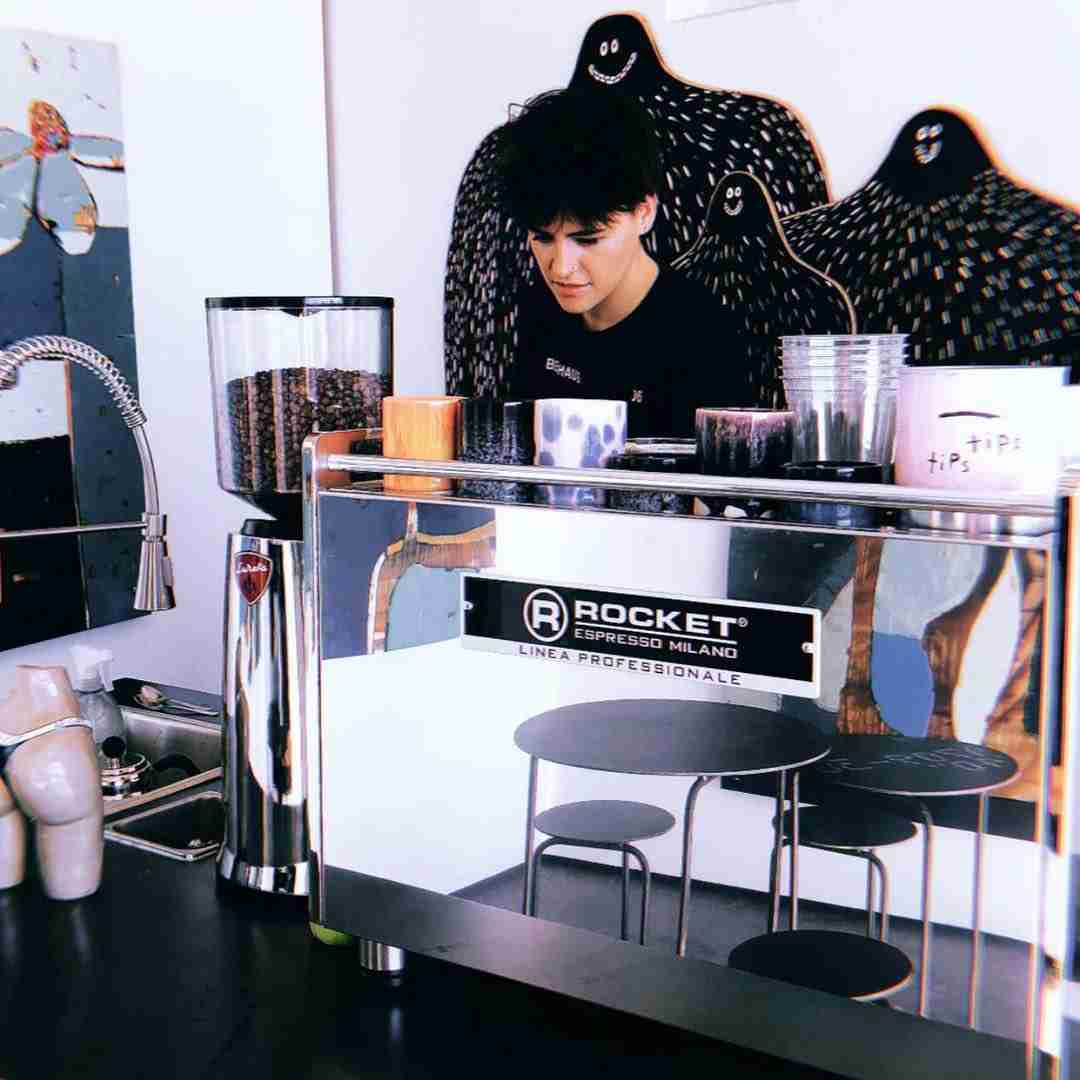 Belhaus is an artist-run gallery in Downtown Phoenix where you can discover and collect original artwork from a select group of local and international contemporary artists. Not only that, they serve superb Madcap coffee in an “underground” shop tucked inside the space, and just a heads up, there is no wifi – darn, now you have to be spiritually present and gaze upon compelling, cutting edge artistic renditions. 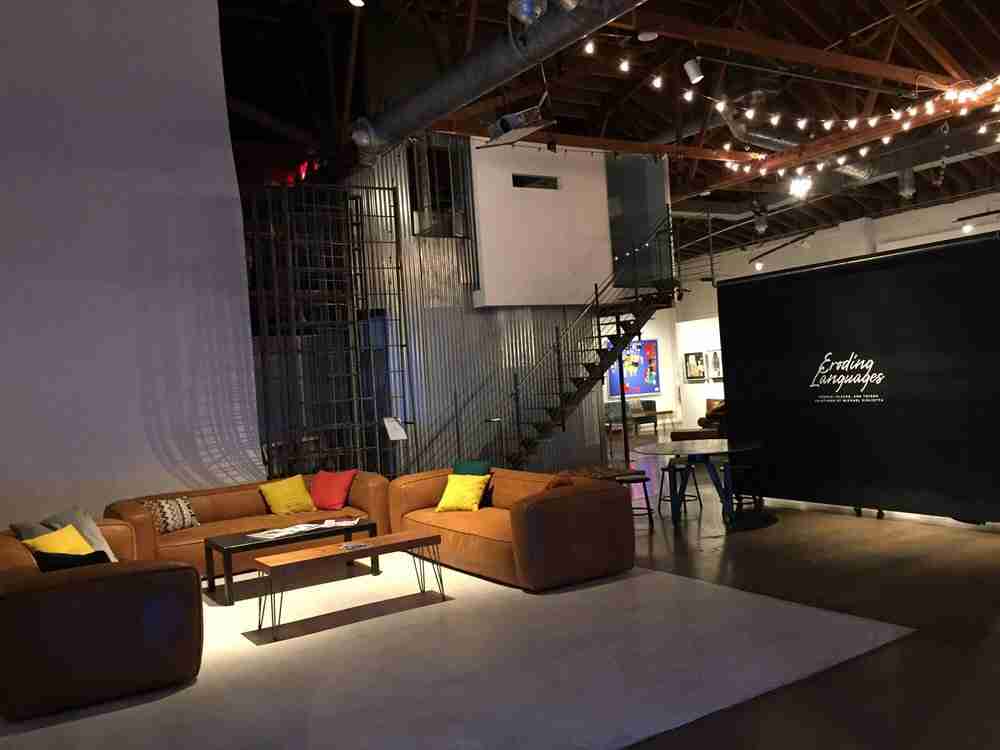 Housed within monOrchid, what can be considered a home away from home collaborative workspace which features a specially curated gallery of local art, be Coffee + Food + Stuff is a full-service coffee bar that offers a rotating selection of unique beans. This place is the ultimate culmination of Roosevelt Row, plush seating sparsely dappled throughout canvases drenched in fine-tuned imagination, paired with a hard to come by cup of joe. There’s also The Dressing Room next door, the most recent addition to this cultural trifecta, serving street-style food, like burgers and tacos, as well as beer and wine into the late night. 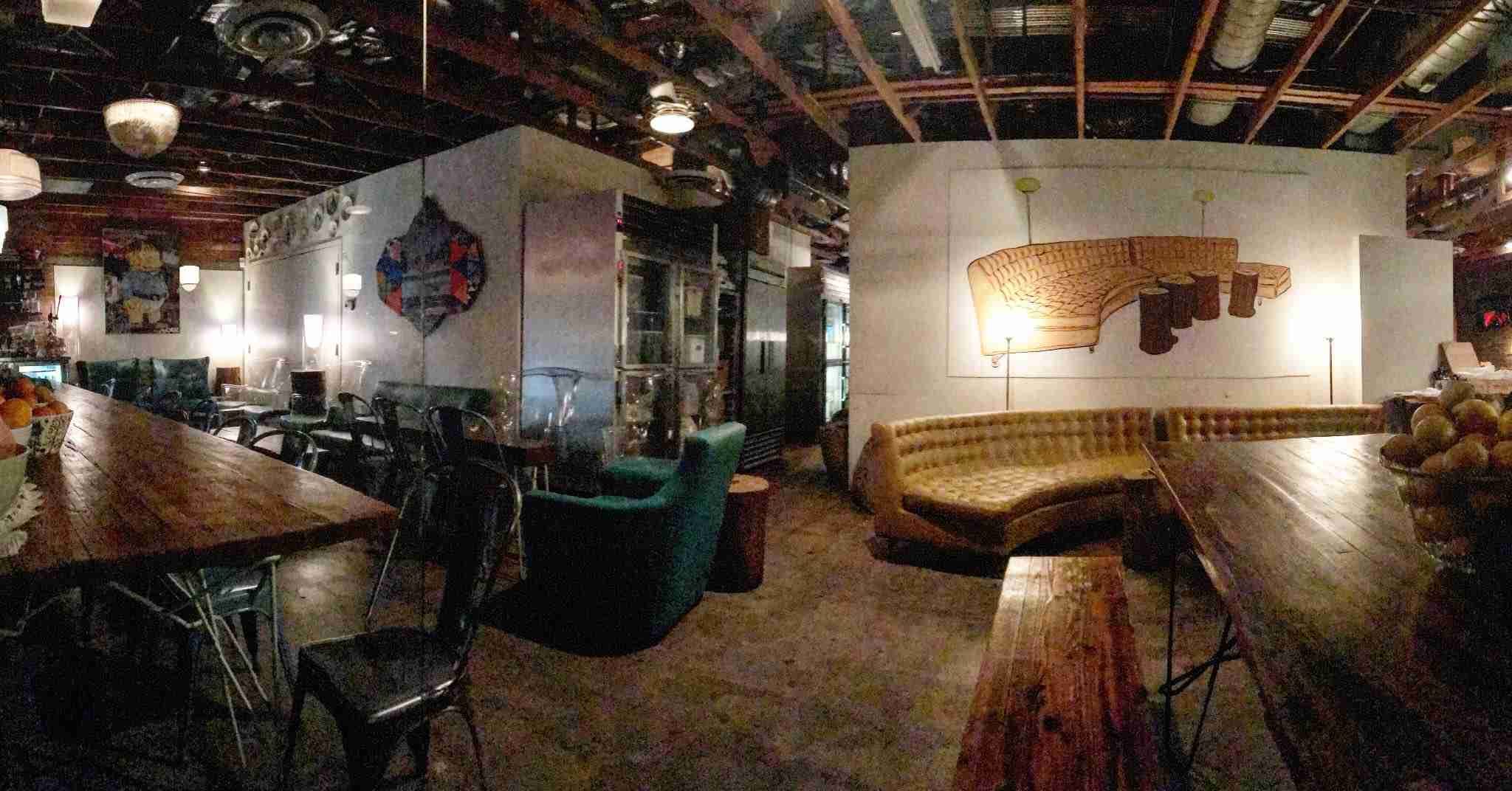 Everything you ever dreamed a cafe could be, Lux Central encompasses within its sophisticated ambiance, thoughtfully bold decor, and lively clientele. Throughout the day, most come for fresh coffee made from beans that are hand-roasted in house, and as darkness falls upon the desert, intricate craft cocktails begin hitting their dimly lit bar top. It’s no wonder that Lux has developed what can be regarded as the most esteemed reputation among Phoenix coffee shops, every inch of the building has been thoughtfully designed to enrich their guest’s experience, morning, afternoon, or evening. 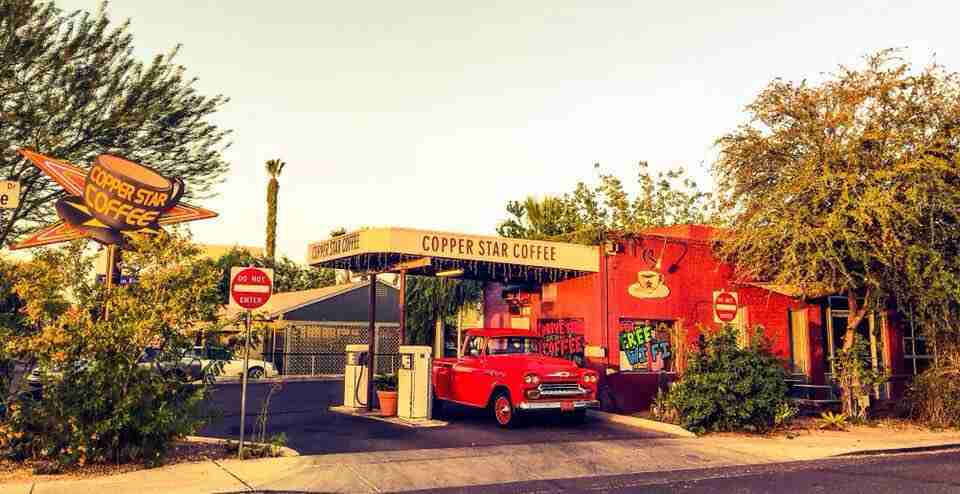 This service station first opened in 1933 to help with the needs of an ever-expanding wave of new residents moving to Phoenix. Fast forward to the mid-2000s, and Bill Sandweg is wrestling with city officials over the property’s future – at some point in time, it had fallen into disrepair, Sandweg hoped to revitalize the land with a one of a kind cafe. Local government approved his imagined transformation, giving way to what became a whole new kind of energy source for the community: java.

Since then, Copper Star Coffee has won numerous awards for both coffee and pastries, however, most of all, they are simply proud of being a welcoming gathering space for their neighborhood. Stop in for a drink, meet a friend, relax, and stay awhile as for the better part of a hundred years, the staff at this station has always been happy to be of service! 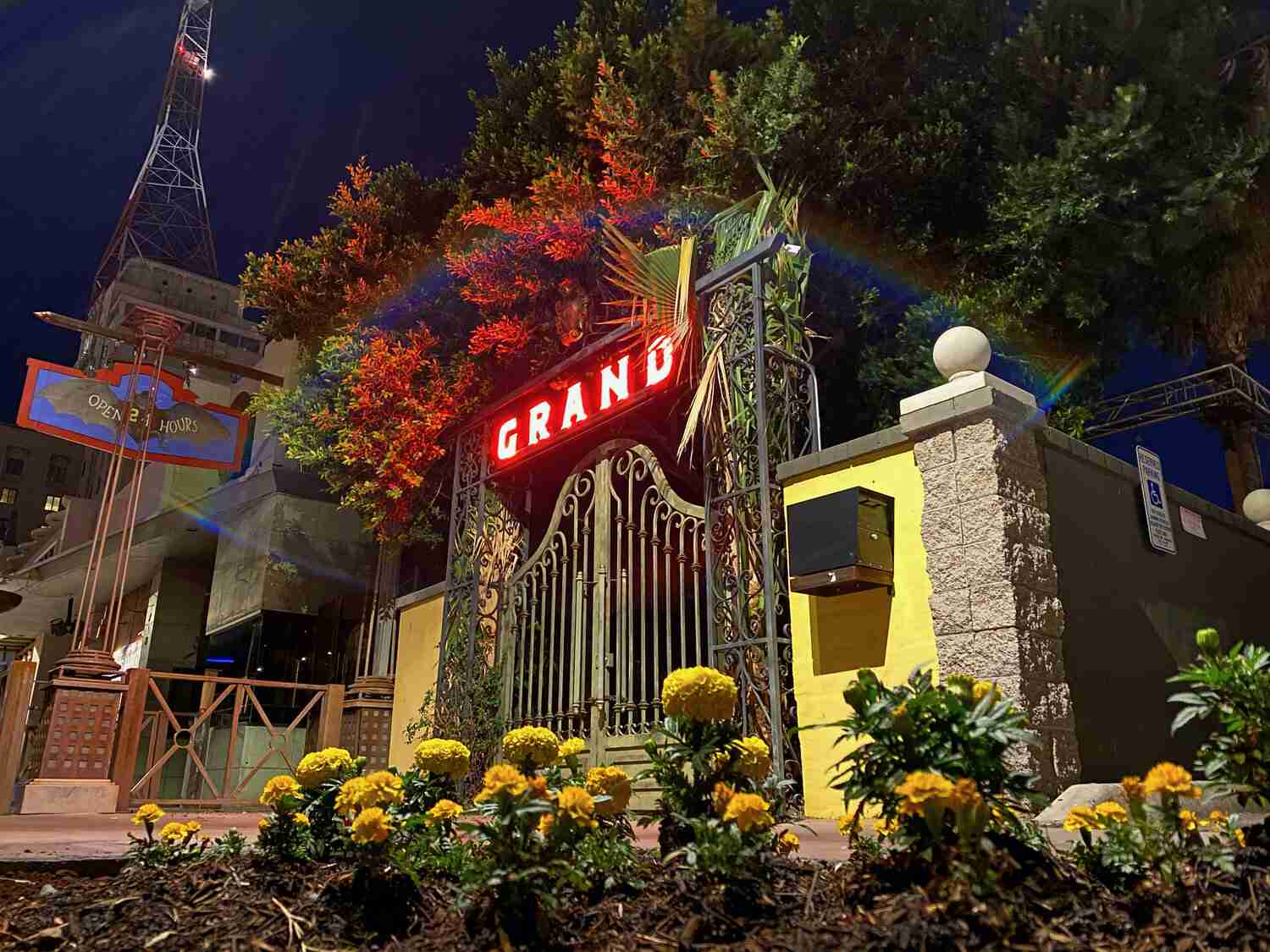 The entrance is marked by a gate fit to guard the outskirts of Jay Gatsby’s glorious palatial estate. Once inside, Grand assumes an air familiar to that of an old Victorian train station, complete with interesting characters who bring life to immaculately-aged swanky furnishings. Having a coffee shop, bar, ballroom, beer garden, and outdoor stage, surrounded by spaces both open and intimate, including extensive patio areas, makes it a perfect destination to meet with friends, or have an impromptu business meeting. Cheers, old sport! 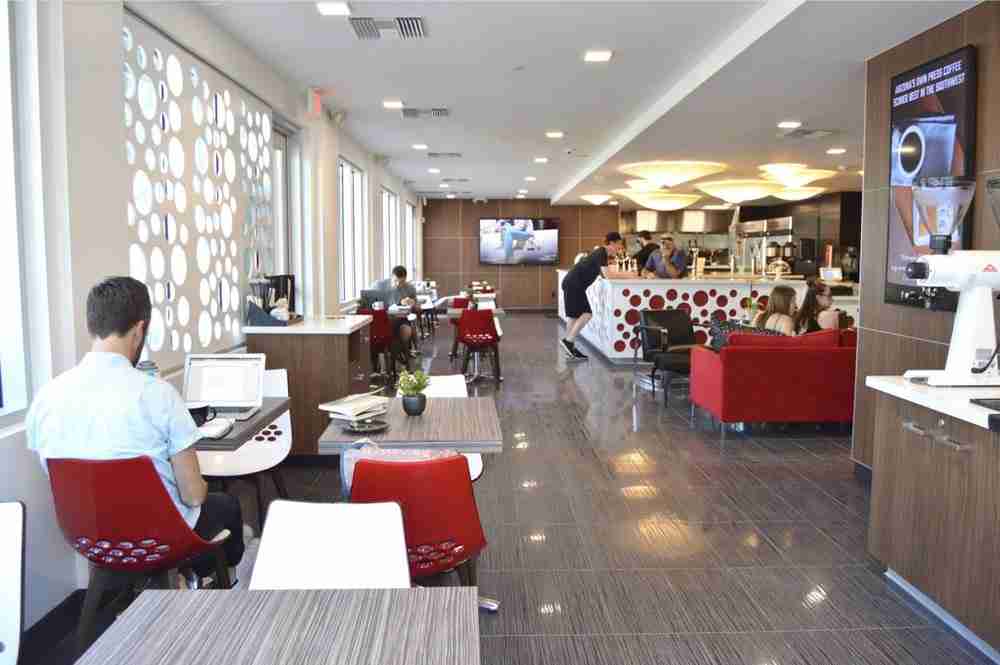 When Steve Kraus and his wife Tram Mai opened the first Press Coffee house in 2008, the great recession left them with little more than their exceptionally sourced beans and an aesthetically brilliant ambiance to depend on. Both of those honest qualities, along with a phenomenal staff, not only navigated the shop through an era marred by financial hardship but would also lead to substantial growth that today amounts to eight locations throughout the valley. This grand canyon state native also dishes out a pretty mean breakfast burrito or, if something lighter sounds more appealing, give the mouth-watering bacon and egg avocado toast a try. 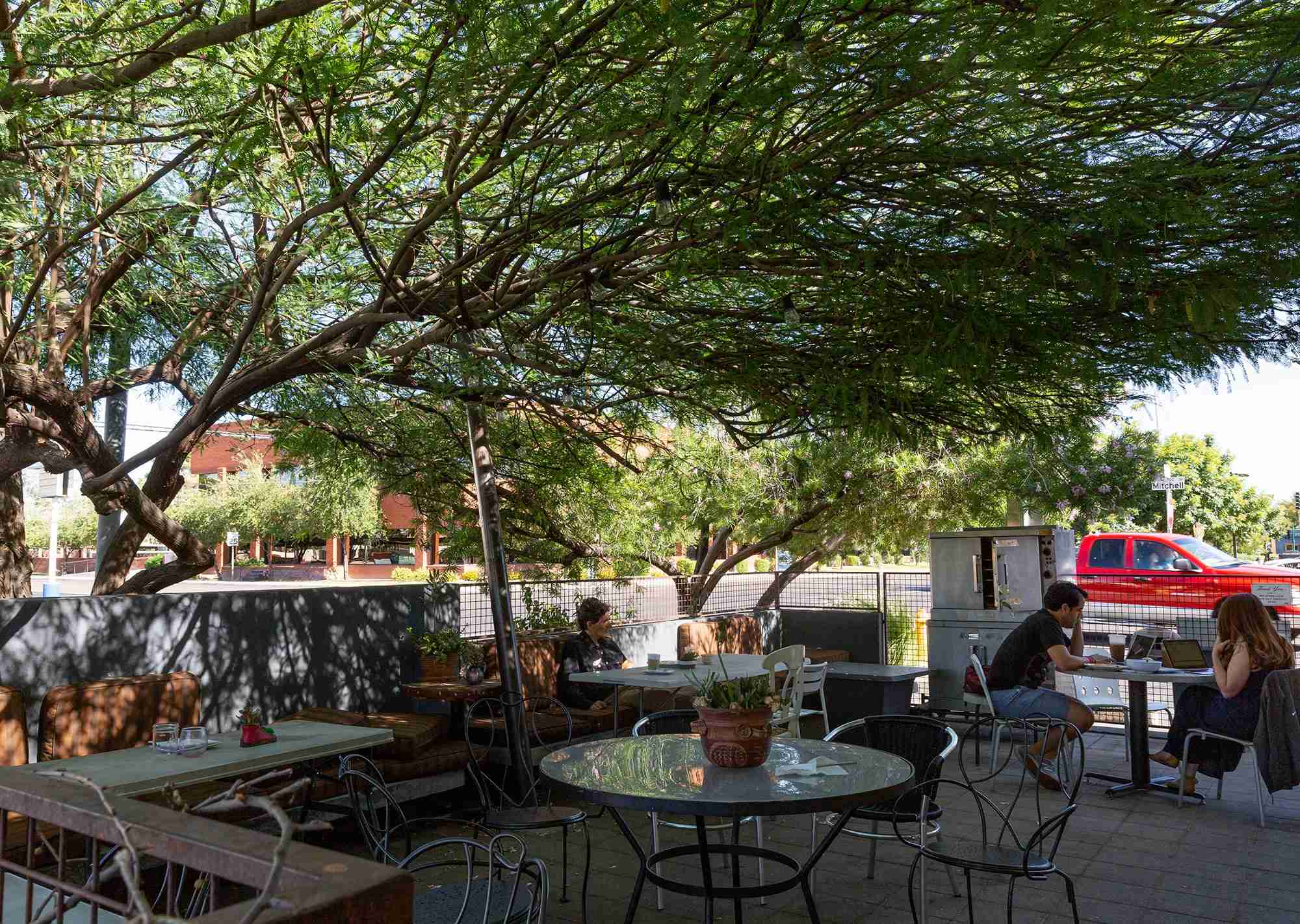 Bringing standard practice to plant-based, Urban Beans (UB) is an all-vegan market place, coffee shop, caterer, and bakery located in beautiful midtown Phoenix. Oh. and then there’s the bar, which boasts a selection of 22 wines and 9 craft beers that pair fabulously with the gentle shade of a tree whose limbs are outstretched over patio seating. UB used to be open 24/7, however, since the onset of covid-19, they’ve adopted more reasonable hours – either way, it’s always a great time to gather with loved ones while knocking back some of the freshest locally roasted coffee the city has to offer.