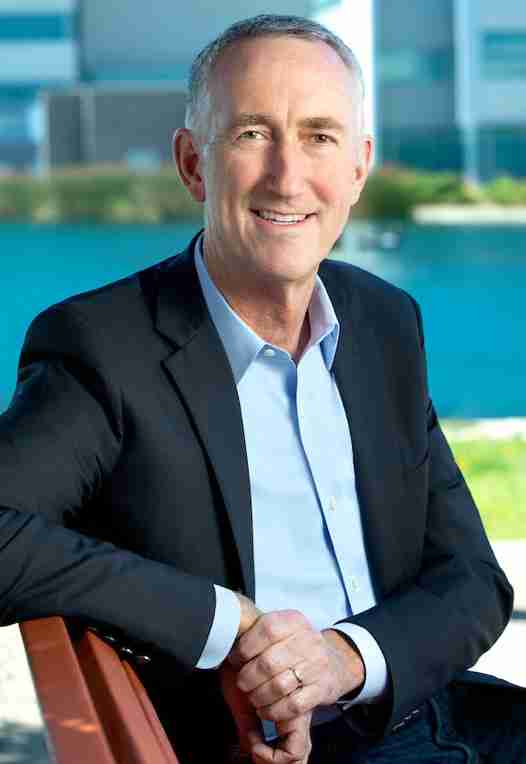 In an interview with Slone Partners, O’Day is asked what qualities he looks for in leadership candidates.

It’s valuable to get to the heart of what makes someone tick. Their sense of purpose needs to match with our culture and our intrinsic motivation of making a difference for patients. It sounds simple, but I always tell people to follow what makes them happy because if you really enjoy something and find it highly motivating, the chances are you’ll do well at it. If your sense of purpose doesn’t match with the mission and purpose of the company, you’ll only get so far.

On the experience side, I always look for folks that have a diverse mindset and are driven by looking at problems from multiple angles. I believe very much in spending a lot of time in the hiring process, getting that right, hiring the very best people you can.

The O’Day’s can trace their immediate family’s American history back to 1853 in Berlin, Wisconson; this was the birthplace of Daniel’s great-grandfather, Richard O’Day. They worked on the railroads until Daniel’s grandfather got involved in the oil industry; which led to his dad growing up in Cut Bank, Montana.

Daniel describes his father as being very “literal.” He points to the man’s initial interview with IBM, explaining how the recruiters, maybe half-jokingly, told him they only hire people with master’s degrees. Having already completed his undergraduate at Gonzaga (being the first of his family to earn a college degree), he walked out and got a master’s in mathematics from Washington University.

When he returned to the office two years later the same recruiters were still there. O’Day recounts, “They couldn’t believe that he’d actually gone off and done what they told him to do, so they gave him a job. That job turned into a thirty-five year career with IBM.”

Our main character in this story, Daniel O’Day, was born in Texas in 1964 but did a lot of moving around as a child. His father enjoyed a lengthy career at IBM and that meant home would have to be where the heart was.

Family meant everything to Daniel and his four siblings. In addition to this immediate familial bond, the father impressed upon them an intrinsic pride for their Irish heritage. Later in his life, O’Day would explain, “The perseverance of my Irish ancestors is a daily motivation to me professionally and personally.”

He then goes on to tell the writers at Irish America about how his dad made a point to take the whole family back to Ennis, County Claire. Although, noting, “we don’t have a direct connection with relatives, but we have run into other O’Days doing their pilgrimage at the O’Dea Castle.”

Having grown fond of a roaming lifestyle, as a kid, Daniel hoped to one day have an “international job;” something that would require lots of travel and experiencing new things. His first job, however, was in landscaping. He attributes his initial desires for higher education to having experienced this grueling manual labor.

Why the healthcare industry? While attending high school in Connecticut, O’Day found work as an Emergency Medical Technician. He had always shown considerable interest in the medical field and tending to those in need of critical care only affirmed those burgeoning passions.

O’Day went on to do his undergraduate in biology at Georgetown University.  When graduation came around, he pondered going to medical school but ultimately decided to join the business side of the healthcare industry.

In further regards to his education, he’d later earn an Executive MBA from Colombia University.

With his future on the horizon, O’Day began applying to pharmaceutical firms. Several of them got back to him offering positions yet he was cautious in accepting any immediately.

He asked his father, “Dad, which would you pick?”

His father responded, “Well, who was the hiring manager that you think you could learn the most from, and would inspire you the most?”

In reading the tea leaves, O’Day explains, “What he was saying was, ‘pick the right cultural fit,’ so that is what I did and I was fortunate enough to be hired by Roche.”

Daniel O’Day’s career with Roche would blossom into a 30-year affair. Before we get into the various roles he served within the company, let’s explore what cultural factors encouraged him to stay with them for so long.

First, he praises how Roche always put patients needs first, saying, “this way of thinking was instilled in me by my mentors in the organization and I pass it along to others: If you need to make a choice between something that is right for patients and something that seems better for the business, ALWAYS chose the option that is right for patients.”

Next, O’Day mentions that he loves how decentralized the company is. Although it is a massive international pharmaceutical powerhouse, with offices in over 150 countries, a lot of responsibility for creativity and decision making rests at the local level. With so many unique experiences available to tend to all over the globe, one can understand, based on what we’ve discovered about his childhood, how O’Day began to flourish at Roche.

According to Roche, Daniel O’Day served in the following capacities throughout his lengthy career.

While CEO of Roche Pharmaceuticals, a division of parent company Roche holdings, O’Day answered another question posed by Sloan Partners, and his comments really summed up the growth the company experienced throughout his career.

I think all of us at Roche would measure our level of accomplishment by the number of groundbreaking medicines we’ve brought to society. In that respect I’ve had the fortune of being here for one of the most exciting and prolific times in our history. In oncology alone we have really been pioneers in advancing targeted treatments like Rituxan and Herceptin. I would say we have changed what it means for patients who get a diagnosis of HER-2 positive breast cancer and indeed many other tumor types.

Today, many of our medicines are for diseases where there were no previous treatment options or no treatment advances in decades, such as Ocrevus for primary progressive multiple sclerosis and Hemlibra for a certain type of hemophilia. The FDA has awarded a total of 23 breakthrough designations to our medicines, across multiple disease areas including hematology, neurology and ophthalmology. I believe that level of innovation and the impact on patients worldwide is a terrific accomplishment.

I would say many of our smartest decisions have been around our organizational model and our innovation network. Roche has been quite purposeful about keeping autonomous research centers, including Chugai in Japan, Genentech in the U.S. and Roche in Europe.

We take the same approach with our partnerships, our scientists, and in fact all our employees in that we very much encourage autonomy. It has proven to be a winning formula for driving innovation. I would also say that we were really ahead of the curve in our strategy of pursuing personalized healthcare and our decision to have Pharma and Diagnostics under one roof.

On the Benefits of Traveling

Regarding how travel has shaped his leadership style, O’Day explains, “I feel very fortunate to have had such a varied global career and I think these diverse experiences have formed who I am as a person and my thinking on most things. This diversity is something I always wanted because a leader needs to be able to appreciate many different perspectives.”

Big Data and the Healthcare Industry

O’Day is a big believer in fostering lasting partnerships with entrepreneurial companies whose data can improve healthcare. For example, Apple CEO Tim Cook has said in numerous interviews that he sees the companies future becoming heavily health-related.

Products like the iPhone and Apple watch gather unprecedented swaths of user data such as miles traveled, heart rate, workout time, etc. Pharmaceutical companies, when allowed access, can implement that invaluable information into their own studies – in turn using it to further their missions for improved human health.

Voicing his views on the subject, O’Day tells Irish America:

The digital world is helping to take personalized medicine to a new level because of two things: the availability of big, robust data sets that track people over a long period of time, and the application of really advanced computer capabilities. Advanced analytics can interrogate the data to come up with ideas for new medicines, enable us to do clinical trials faster, and eventually to help the healthcare system determine who should be treated and who shouldn’t in a constrained economic environment.

The discovery of medicines is all trial and error, at the end of the day. You have a hypothesis, you test it, you adapt it, and you keep trying. The better you can analyze the data, the more refined your hypotheses are going to be and the more likely you are to get things right first time or be able to adapt quickly. It has a huge effect on reducing the time of bringing transformational medicine to patients for diseases where there is significant need.

According to BioSpace, Milligan had “served 28 years with the company and oversaw the development of a virtual cure for hepatitis C with Harvoni and Sovaldi, as well as the development of significant treatments for HIV. Also, under Milligan’s leadership, Gilead Sciences carved its way into the immuno-oncology space with the $12 billion acquisition of Kite Pharma and its CAR-T treatment.”

Since his arrival, O’Day’s most pressing responsibilities have been ensuring that Gilead’s pricey move into CAR-T cancer treatment proves prosperous and correctly using the companies $28 billion in cash and short-term investments for promising acquisitions, research, and development deals.

On another note, at the time of this articles writing humanity is in the midst of the COVID-19 global pandemic. There is currently speculation that Gilead Sciences may be on the forefront of a vaccine. Only time will tell.