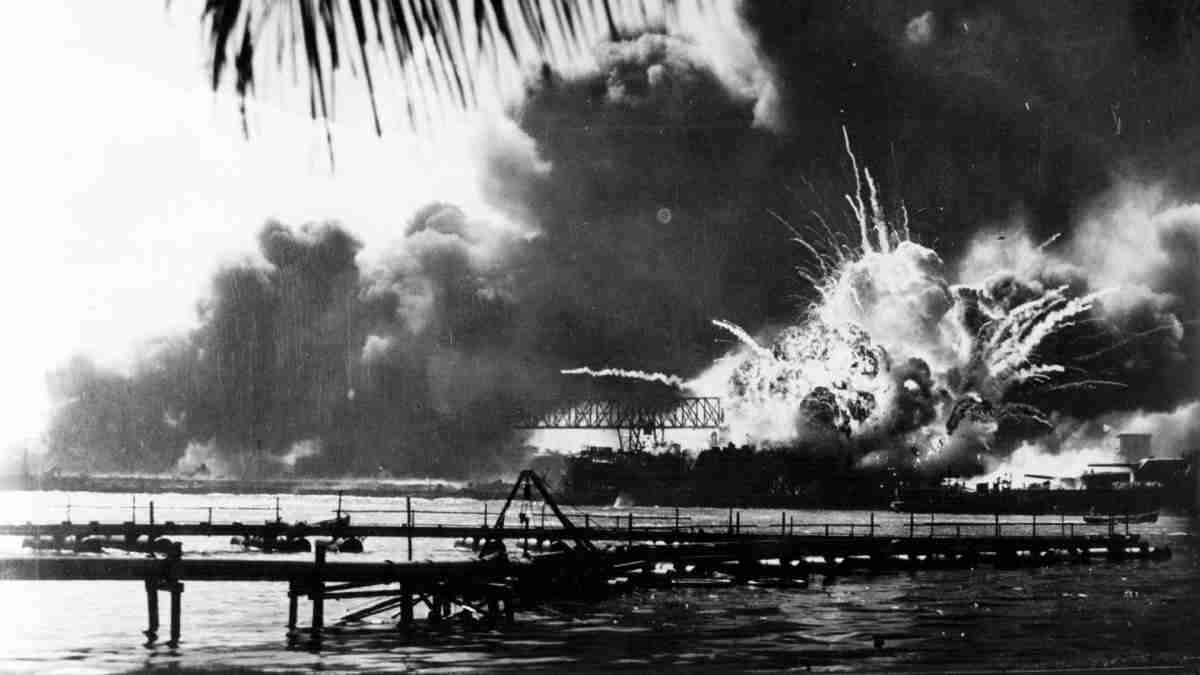 A Day Which Will Live in Infamy

On December 7th, 1941, the Empire of Japan launched a surprise attack on the United States Navy at Pearl Harbor. 2,403 Americans were killed and another 1,143 were wounded. Up to this point, President Roosevelt was trying to do everything he could to aid the British in their resilient stand against Nazi Germany, and meanwhile, ensure Americans that they would not have to send their sons off to die in what was dubbed a “European War.”

The only thing keeping Hitler from conquering the United Kingdom was the English Channel. It was only a matter of time until that body of water wouldn’t be enough to stop a Nazi invasion and Churchill knew it. As the entirety of Europe had already fallen to the Axis powers, the British remained more content choking in their own pool of blood than they did surrendering to Hitler.

One of two fates awaited the English: death or absolute victory. The only way absolute victory could be possible was if the United States joined the fight. So they waited for their cousins across the pond as German bombs rained overhead, setting London ablaze and methodically grinding England to rubble.

Using Sir Winston Churchill’s book, The Grand Alliance, we share his reaction to the news of the attack at Pearl Harbor.

The endless work that was being Europe’s last standing nation of free men had kept Churchill up late into the evening. With the night winding down, only two other men remained at his side, the United States ambassador to the United Kingdom, John Winant, and American businessman, politician, and diplomat, Averell Harriman.

Churchill turned on his small wireless set to catch the nine o’clock news, he remembers hearing about various skirmishes throughout the globe but nothing particularly notable. He elaborates, saying, “I did not personally sustain any direct impression, but Averell said there was something about the Japanese attacking the Americans, and, in spite of being tired and resting, we all sat up.”

As the men listened in anticipation for more details, a butler named Sawyers happened to enter the room and affirmed their concerns, telling them, “It’s quite true. We heard it ourselves outside. The Japanese have attacked the Americans.”

Unsure of the magnitude of what had just occurred on the opposite side of the planet, Churchill’s thoughts began to race. Not too long ago, on November 11th, he had made a promise saying that if Japan attacked the United States a British declaration of war would follow “within the hour.”

Churchill sprang from his seat, made his way down the hall, and asked his staff to call President Roosevelt.

Before the call proceeded, Winant asked Churchill, as though he was about to take some irrevocable step, “Don’t you think you’d better get confirmation first?”

This was no time for political correctness.

Within a minute or so, Roosevelt was on the line. Churchill asked, “Mr. President, what’s this about Japan?”

“It’s quite true,” Roosevelt replied. “They have attacked us at Pearl Harbor. We are all in the same boat now.”

Churchill said to him, “This certainly simplifies things. God be with you.”

After Winant exchanged a few words with the President, the call was ended. Churchill remembers, “We then went back into the hall and tried to adjust our thoughts to the supreme world event which had occurred, which was of so startling a nature as to make even those who were near the centre gasp.”

Even after speaking with Roosevelt, Churchill wasn’t yet aware of the staggering losses the United States Navy had suffered. Describing Winant and Averell’s reaction to their country now being at war, he says, “they did not wail or lament…they wasted no words in reproach or sorrow…in fact, one might almost have thought they had been delivered from a long pain.”

Although Parliament would not meet until that upcoming Tuesday, Churchill began making a flurry of calls in order to “implement without a moments delay a declaration of war upon Japan.” While a number of formalities still needed to be taken care of, the gears of World War Two were by all means in full motion.

Churchill explains his feelings that evening, beginning with, “No American will think it wrong of me if I proclaim that to have the United States at our side was to me the greatest joy. I could not foretell the course of events. I do not pretend to have measured the marshall might of Japan, but now at this very moment I knew the United States was in the war up to the neck and in to the death. So we had won after all!”

He continues, “England would live; Britain would live; the Commonwealth of Nations and the Empire would live. How long the war would last or in what fashion it would end, no man could tell, nor did I at this moment care. once again in our long Island history we should emerge, however mauled or mutilated, safe and victorious. We should not be wiped out. Our history would not come to an end. We might not even have to die as individuals.”

Finally, Churchill concludes, “Hitler’s fate was sealed. Mussolini’s fate was sealed. As for the Japanese, they would be ground to powder. All the rest was merely the proper application of overwhelming force…United we could subdue everybody else in the world. Many disasters, immeasurable cost and tribulation lay ahead, but there was no more doubt about the end.”

Addressing Doubts About The Americans

There were many people throughout Europe who didn’t believe the Americans would be strong enough to defeat the Nazi war machine. This sect of pessimistic buggers spread rumors that they were soft, could never be united, would never stand blood-letting, and their democracy and system of recurrent elections would paralyze their war effort.

Churchill describes these people as “numerous but remote, wealthy, and talkative.” He knew these people would soon be proven wrong. American blood flowed in his veins, he adds, “I had studied the American Civil War,” a conflict which was, “fought out to the last desperate inch.”

Pointing out a comment made to him decades before World War Two, Churchill notes Sir Edward Grey having once prophetically stated, “The United States is like a gigantic boiler. Once the fire is lighted under it there is no limit to the power it can generate.”