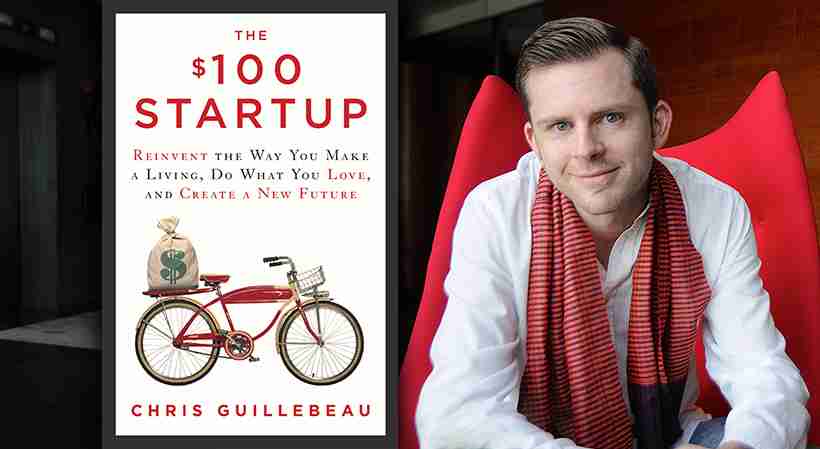 About the Author: Chris Guillebeau is an entrepreneur, traveler, and writer. His previous book was The Art of Nonconformity. During a lifetime of self-employment and ventures ranging from online publishing to volunteer work in West Africa, he has visited nearly every country on Earth before the age of 35.

Host of the World Domination Summit, an international gathering of creative people, Chris is focused on encouraging individual quests while also “giving back.” His main website, ChrisGuillebeau.com is visited by more than 300,000 people a month.

How To Ditch Your Job and Make A Living

In The $100 Startup, Chris Guillebeau isn’t teaching us how to get rich; rather, he’s helping readers figure out creative ways to avoid being shackled by a dreadful 9 to 5 job by way of starting what he calls a “microbusiness.”

Guillebeau elaborates on the encouragingly low barrier-to-entry of such a venture, saying “our story is about people who start their microbusinesses without investment, without employees, and often without much of an idea of what they’re doing.”

For example, there’s Charlie Pabst, who was a successful architect with a “dream job” as a store designer for Starbucks. Pabst says, “One day I drove to work and realized I couldn’t do it anymore, called in sick, drafted my two-week notice, and the rest is history.”

Charlie Pabst now works from home as a designer for clients of his choosing.

This book is essentially a collection of stories similar to Charlie’s. In addition, it includes the invaluable insight Guillebeau has to offer; he says, “In sharing these stories, the goal is to provide a blueprint for freedom, a plan you can use to apply their lessons to your own escape plan.”

This all sounds great, but what if you don’t have the first clue as to what you could sell?

First things first, Chris brings up the concept of convergence, he says, “as we’ll examine it, convergence represents the intersection between something you especially like to do or are good at doing (preferably both) and what other people are also interested in.”

Keep in mind, the thing you’re most passionate about may not be what you have the best opportunity to sell. So if you love digging meaningless holes in the desert, recognize that that will prove fairly difficult to successfully market.

The important thing is to find the overlap between what you’re capable of doing and what people will find useful. Chris stresses, “where passion or skill meets usefulness, a microbusiness built on freedom and value can thrive.”

Now comes the part where we begin turning to refine that skill into some form of product or service.

Chris points out, many of the projects examined in the book “were started by people with related skills, not necessarily the skill most used in the project.”

Kat Alder, originally from Germany, was a waitress in London for some time and one evening a guest at her table said to her, “you know, you’d be really good at PR.” Kat didn’t know the first thing about PR. All she knew was she had amazing people skills – skills that she used for her job as a server.

Fast forward to when she got fired by the BBC, she thought back on that conversation and began looking into how public relations works. Within a month, while still figuring out how to go about things, she landed her first client. Four years later, she has five employees with operations in London, Berlin, New York, and China.

In concluding this section of the book, Chris implores that “to succeed in a business project, especially on you’re excited about, it helps to think carefully about all the skills you have that could be helpful to others and particularly about the combination of those skills.”

You Don’t Have To Be The Best

It isn’t necessary to be the best at any given skill either, as Scott Adams, creator of the Dilbert comic series, explains below:

I succeeded as a cartoonist with negligible art talent, some basic writing skills, an ordinary sense of humor and a bit of experience in the business world. The “Dilbert” comic is a combination of all four skills.

The world has plenty of better artists, smarter writers, funnier humorists and more experienced business people. The rare part is that each of those modest skills is collected in one person. That’s how value is created.

The key to creating a successful microbusiness is bringing the first two ideas together.

Take, for instance, the story of Brandon Pearce. Brandon was a piano teacher who had a tough time keeping up with his administrative work. He did some computer programming as a hobby and used that skill to create software that would track his student, scheduling, and payments.

Pearce says, “I did the whole project with no intention of making it into a business.” Adding, “But then other teachers started showing interest, and I though maybe I could make a few extra bucks with it.”

Guillebeau shares with us that the “few bucks” Brandon hoped for eventually turned into a full-time income of $30,000 a month. Not bad. On top of all that, he now spends his time traveling the world with his family.

Your checklist should consist of the following items:

All in all, according to Chris Guillebeau, “you just need a product or service, a group of people willing to pay for it, and a way to get paid.”

For more from The $100 Startup, be sure to purchase the book using the link below: