Anaheim Was Once California’s Largest Wine Producer. What Happened? 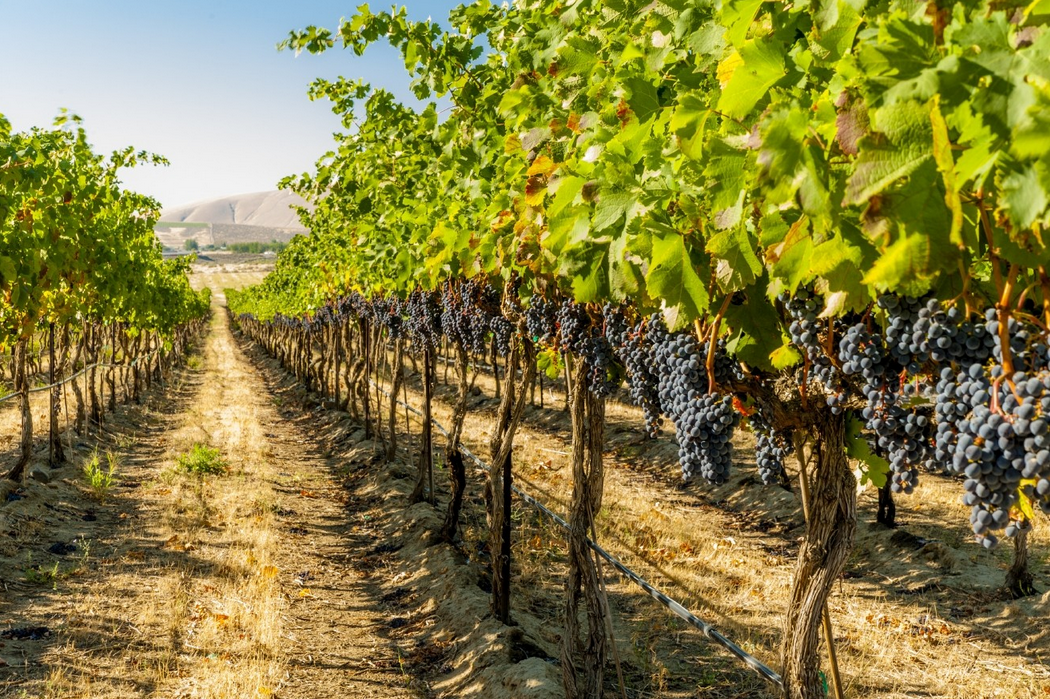 Before the Oranges…There Were Grapes

By the 1930’s Orange County was producing a sixth of the United States’ Valencia orange crop, however, just before the turn of the 19th century Anaheim, in particular, became one of the most celebrated growing regions in the nation, pumping out millions of gallons of wine annually! Then it all collapsed. In the blink of an eye, farmers adapted and oranges were planted.

Now you’re sitting on your cozy porch nestled in between the hills of Yorba Linda wondering if that valley down below – the one the 91 freeway runs through – in another universe could have become what Napa Valley is to the wine industry today. If this were the 1880’s you’d be willing to invest money on that notion, as many business persons did.

Funny enough, this whole story began just an hour south of Napa, in San Francisco, amongst a group of Germans who were fed up with the gold rush. 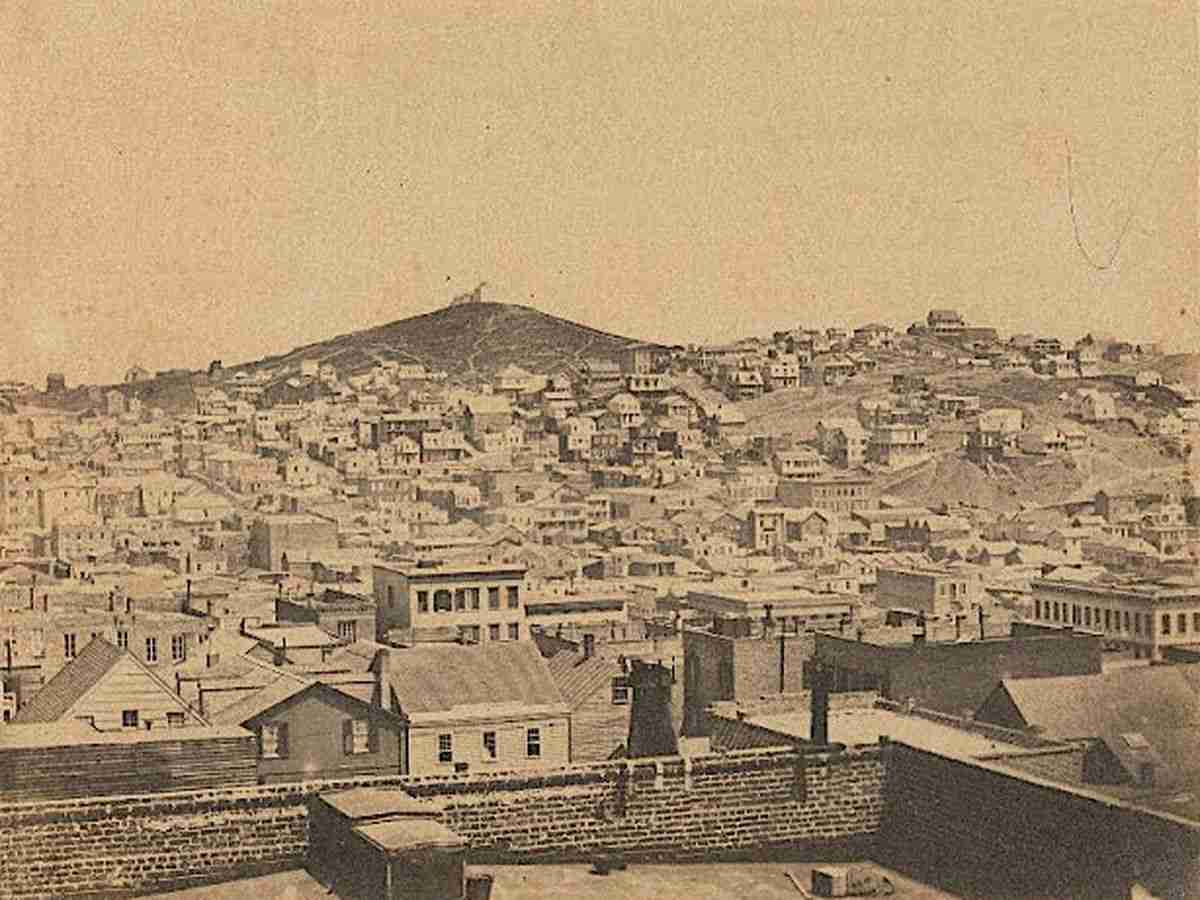 Charles Kohler and John Frohling were musicians who traveled the world performing alongside fellow Germans in a popular band. Knowing nothing of the wine industry, they took a shot in the dark to launch Kohler and Frohling and hit the bullseye as it became one of the most recognized brands in the nation. As demand skyrocketed, more grapes, land, and workers were urgently needed.

The gentlemen were well acquainted with the San Francisco German population. They understood that many within their community had grown tired of the dirty and crime-infested streets of the city. Not only this, but the harsh reality that many were not striking it rich during the gold rush caused overall hope for a better life to dwindle. These people were looking for a way out. Kohler and Frohling were a perfect fit. 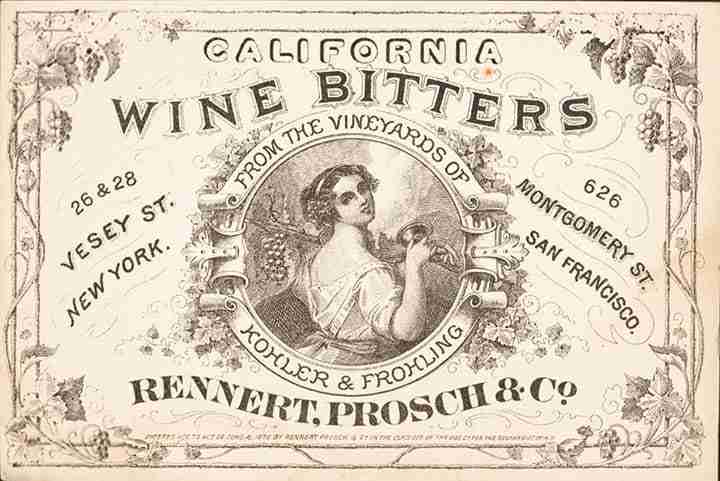 A general manager was needed to oversee this entire endeavor. Enter George Hanson, an Austrian who had served as deputy surveyor to the county of Los Angeles for six years. In February of 1857, after consulting with Kohler and Frohling from the beginning, he stepped in front of a large gathering of Germans in San Francisco to announce the formation of the Los Angeles Vineyard Society; under this name, the operation would take shape. 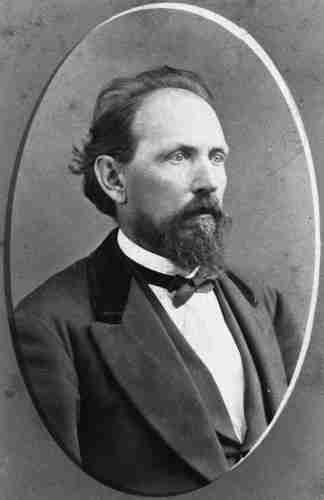 Note: at this period in time, the area that is now known as Anaheim was technically part of Los Angeles County as Orange County did not yet exist.

The University of California describes the plan as simple, “The society would issue fifty shares at $1,400 each; with the capital thus raised, the society would buy land, divide it into twenty-acre parcels, of which eight were to be in vineyard, and assign one to each shareholder.“

“But – and this was the distinctive idea of the whole scheme – before anyone moved onto his property, everything was to be put in readiness.”

This plan is really brilliant in its straightforwardness. A participant would put an initial down payment on a share, securing his land and position in the vineyard society. Because he was not expected to make the move to Anaheim until the land was in a position to produce wine, the investor could remain gainfully employed at their job in San Francisco; this allowed participants time to pay up for the rest of their shares as the land was simultaneously being prepared.

Keep in mind, it was not money that necessarily motivated these Germans to up-root and start a colony in southern California. It was the opportunity for a better life, a better way of life at least. Anaheim represented a place they could raise their families in a respectful community and ultimately provided the fertile land from which they could watch their greatest investment grow – their children.

Early Stages of the Colony 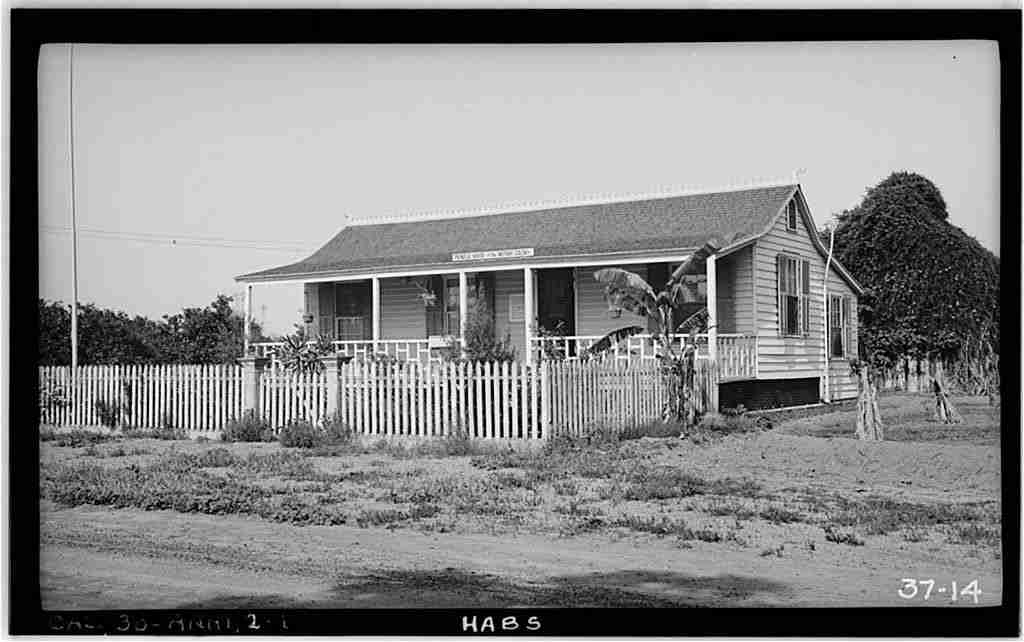 George Hanson’s Home in Anaheim AKA the “Mother Colony House”

To the dismay of shareholders, it took all of two years for Hanson to ready the land. Throughout these years, he enlisted the irregular help of local Indians and Mexicans to complete this epic transformation of a dry-baron landscape into a fertile environment where rows of vineyards could thrive. By the end of it all, they had dug irrigation channels, planted 400,000 Mission cutting vines, and surrounded the entire property with 40,000 six-foot willow, alder, and sycamore poles that would later grow into a living hedge to protect against wild animals.

The first shareholders arrived in Anaheim in September of 1859. One of the most fascinating parts of this story is these “farmers” really had no experience in winemaking or even farming for that matter; they were big city tradesman, craftsmen, and mechanics! Nevertheless, as soon as they arrived to claim their laid-out, irrigated, and planted 20-acre parcels there was no time wasted in getting to work. 1860 saw 2,000 gallons of wine produced. By 1864 the colony was producing 300,000 gallons a year!

This rapid production was likely driven by a competitive nature amongst the shareholders. within the first decade, 47 independent wineries sprouted about the area, each looking to get a step ahead of the other. Such a concentration of competing businesses within the same industry thrust the magical gears of capitalism into motion thus creating a strong, innovative, rapidly improving hub of wine production.

It’s important to note, there was no animosity amongst the stakeholders as there was plenty of room for everybody to succeed in this market – especially when viewed at a national scale. Therefore, according to the University of California, “Even from the earliest years…the accounts of the place tend almost invariably to stress the tranquil, harmonious, pastoral simplicity and fruitfulness of the colonist’ life.” adding “No doubt the idea of a frontier settlement that combined a real community of language and habits of feeling with the poetic labor of winegrowing made this inevitable.”

A great sense of community and fruitful quality of life all remain embraced hallmarks of Orange County living to this day!

1884 saw Anaheim produce at least 1,250,000 gallons of wine, along with 100,000 gallons of brandy. An eastern visitor named Charles Brace described the wine as “unusually pleasant and light…It cannot be stronger than ordinary Rhine wine.” When explaining the scope of distribution, he adds “I found it even in the Sierras, where it was sold at $1.00 a bottle.” In truth the wine was being sold as far beyond the Sierra Nevada mountain range as New York City; business magnate Benjamin Dreyfus saw through to that. 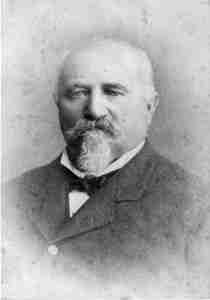 Dreyfus, a Bavarian immigrant of Jewish descent, oddly bore the most fruit from the Anaheim colony despite not being a part of the original Los Angeles Vineyard Society that had plotted the whole scheme. Instead, he opened a store in 1858 in anticipation of the community. As he came to meet just about everybody who rolled into town, his gifts as a salesman shined bright. Soon he’d open the firm B. Dreyfus and Company in New York and San Francisco, this company would sell Anaheim wines throughout the nation.

Dreyfus himself also owned some 235 acres of vineyard in the Anaheim area, from which he even made Kosher wine. According to the Anaheim Public Library, Dreyfus would become known as the “king of Anaheim winemakers” and may also be considered the first to produce kosher wine in the United States.

In his book, Jews and Booze: Becoming American in the Age of Prohibition, Marni Davis boasts that “Dreyfus ran the largest and most technologically modern winery in California, owned thousands of productive acres, and produced hundreds of thousands of gallons of wine a year.” 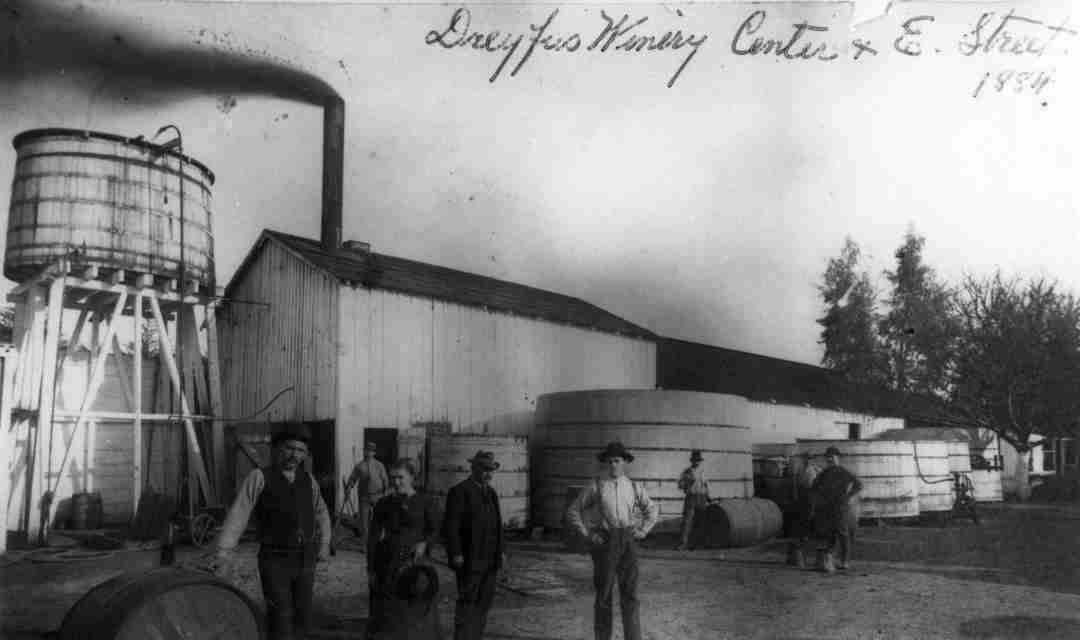 Benjamin passed away in 1886, just before all would come crashing down.

By the early 1880’s Anaheim was at a production peak, selling wines throughout the nation, and attracting visitors from all over the world; most notably including famous Polish actress, Helena Modjeska and Polish author of Quo Vadis, Henryk Sienkiewicz.

The U.S. Department of Agriculture sent an investigator to the region, Newton Pierce, who determined the disease had never been seen before while adding there was simply no cure for it. He suspected the cause was some kind of bacteria carried by insects, however, had no way to prove his hypothesis. Nonetheless, due to his tireless studying of the epidemic, it became known as “Pierce’s Disease.“

To this day, there is no effective repellent or treatment for Pierce’s Disease other than pulling and replacing infected vines.

The growers of Anaheim were forced to react quickly; deciding to plant oranges and by the 1930s the Orange County area as a whole was producing one-sixth of the nation’s Valencia oranges. Not a bad consolation. 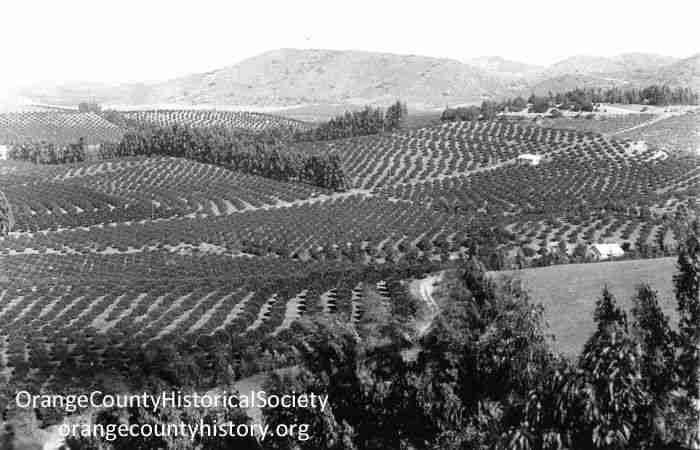 In the end, the original settlers of the Anaheim colony didn’t journey from San Francisco to Southern California to strike it rich in the wine industry; they came to raise their families in a respectable place they could be proud of and could probably care less about the specific crop they were growing.

The endless sea of vineyards may be gone – along with the packing houses and oranges for that matter – however, what we are left with, in Orange County, is an incredible sense of community paired with an unrivaled quality of life.

P.S. Anyhow, everybody knows that when life takes your Grapes…plant oranges…and then build Disneyland!

Nick Dunehew grew up in the suburbs of Orange County before graduating high school and moving to the San Francisco Bay Area to attend Sonoma State University, studying Business-Marketing. After living in the bay for four years he moved to Washington D.C. before ultimately deciding to return to the OC, where he currently resides. A HUGE Los Angeles Lakers fan, loves reading, and you might catch him in Downtown Fullerton on a Saturday night; his choice cocktail is an Old Fashioned!
0 Apr 05, 2021 Nick Dunehew