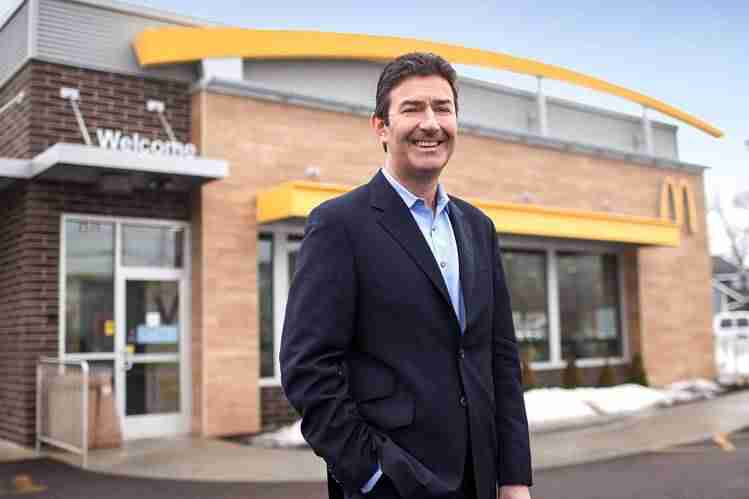 Stephen James Easterbrook was born in Watford, England on August 6th, 1967. As a child, he attended the prestigious all-boys Watford Boys Grammar School in North London where he also took a keen liking to the local Watford FC. In an interview with The Guardian he describes his early relationship with McDonald’s, saying:

“Me and my mate used to go across the park, jump on the Met line to get the tube into Harrow. There was a sports shop we always used to go into, and there was a McDonald’s. We used to go off with three or four quid in our pocket. That would cover our train fare, mooching around Harrow, and going to McDonald’s. It was the first time I had shakes and fries.”

Little did the young lad know, as he rustled through his pockets for whatever small amount of change he could muster, he’d someday be responsible for not only running every McDonalds in Europe, but eventually every McDonald’s on the planet.

He’d go on to study natural sciences at Durham University, managing the opportunity to play cricket alongside fellow student, Nasser Hussain, the future England cricket captain. Steve would always enjoy athletics, in 2010 he completed a sprint triathlon at Blenheim Palace, comprising 750m in the water, 20km on the bike, and a 6km run in one hour and 48 minutes.

After earning his diploma, Easterbrook got an accounting job at Price Waterhouse. It didn’t take very long for him to realize the “Finance” life was not for him and came to the personal understanding he needed to get into some kind of service industry, whether it be retail or restaurants, in order to gain a greater sense of fulfillment from his work; these fields would provide more tangible proof of his contributions to society.

He got hired at McDonald’s as a financial reporting manager in 1993. Easterbrook invested 18 months of his early career at “Hamburger University,” where Mcdonald’s does their corporate training just outside Chicago. Afterwards he worked in a number of roles in operations and finance before being promoted to Vice President for the UK’s Southern Region in 2001. Proving his stripes, by 2006 Steve Easterbrook was responsible for the more than 1,200 restaurants in the UK and an estimated $44 million marketing budget.

McDonald’s stores had underperformed in the two years prior to Easterbrook taking leadership, however, he quickly turned things around by focusing more on employee training, adding healthy items to the menu, and carrying out a major redesign of the restaurants. By 2007 he was given the additional responsibility of overseeing operations in Sweden, Finland, Denmark, Norway, and the Republic of Ireland.

Richard Robinson, who worked under Easterbrook from 2004-2006, describes him in an interview with Business Insider as:

“an outstanding leader, man-manager and all-around good guy. He’s passionate about both the McDonald’s customer and the McDonald’s crew that serve them. He leads from the front counter: This may sound corny, but Steve knows every inch of how the restaurant works, having come up through the ranks. Above all, he’s someone we can all trust to always do the right thing. I’m lovin’ it.”

He Breaks Up With McDonald’s

By 2010 Easterbrook was promoted to President of McDonald’s Europe, becoming responsible for 7,000 restaurants across 39 countries. However, the company had initially promised him the role of Global Chief Brand Officer, before changing their minds and sending him back to London to look over their interests in Europe. It was this indecision combined with family matters at home that lead Steve to leave McDonald’s in 2011 to become CEO of another UK restaurant chain, Pizza Express.

He fostered growth at Pizza Express before opting to leave for another CEO position at noodle chain Wagamama in 2012. All the while, he still kept in touch with the friends he had made throughout his years at McDonald’s.

He Takes McDonald’s Back

As a result of his constant contact with McDonald’s executives throughout his leave from the company, the two parties were able to come to an agreement and Easterbrook returned to McDonald’s in 2013 as the Global Chief Brand Officer. In 2015 it was announced he would replace Don Thompson as Chief Executive Officer as the company as a whole faced many “McProblems.”

That January of 2015 when the public was informed of a coming change in leadership, McDonald’s stock was struggling at $89.56 a share; today (June 3, 2019) the stock trades at $198.78 a share. Easterbrook not only saved the brand, he brought it to new heights.

Notable Changes His Team Made

If you ask him how he did it, he’ll thrust credit to those around him. If you then ask what he thinks he personally brings to the table at McDonald’s, he’ll say his ability to surround himself with people who are better than him at what they do; truly a humble man.

Credit to the McDonald’s team, here is what has occurred since Steve Easterbrook took over as CEO:

They relocated the headquarters from the suburbs to the city of Chicago. Steve felt there was a somewhat soul-crushing vibe at the former HQ location and wanted to put the corporate staff in an environment that would re-energize them.

All-Day Breakfast. Easterbrook explains this was something the company knew customers wanted for a long time, however, they needed to figure out a way to be able to make this possible in every restaurant in America. They start testing the concept in San Diego and see massive success; eventually leading to its roll out across the country.

Remodeling restaurants. It was understood that customers were feeling less than impressed with the worn-out state of McDonald’s restaurants. Like he did with his corporate staff, Steve re-energized the customer experience by bringing a better look to its stores.

Technology. In staying at the forefront of technological innovation within the industry, McDonalds has bought out Dynamic Yield, a leader in decision logic tech. With an army of software engineers they’ve been able to add digital drive-thru boards, Self-Order digital kiosks within the stores, and the implementation of Artificial Intelligence by using those screens to recommend to customers other items from the menu that likely pair well with their individual order.

Delivery. Recognizing the opportunity and future in delivery, they were one of the first large chains to jump on the trend and continue testing ways to improve the experience as the market grows.

What They Will Never Change

Despite all the innovations, in an interview with The Economic Club of Chicago, Easterbrook goes over what he believes will never change about McDonalds:

His sense of humility, selfless dedication to the brand, and commitment to innovation are just the beginning of a slew of x-factors that have driven Steve Easterbrook to lead a company that feeds 1% of the world’s population on any given day back to what will surely be considered its “Glory Days.”