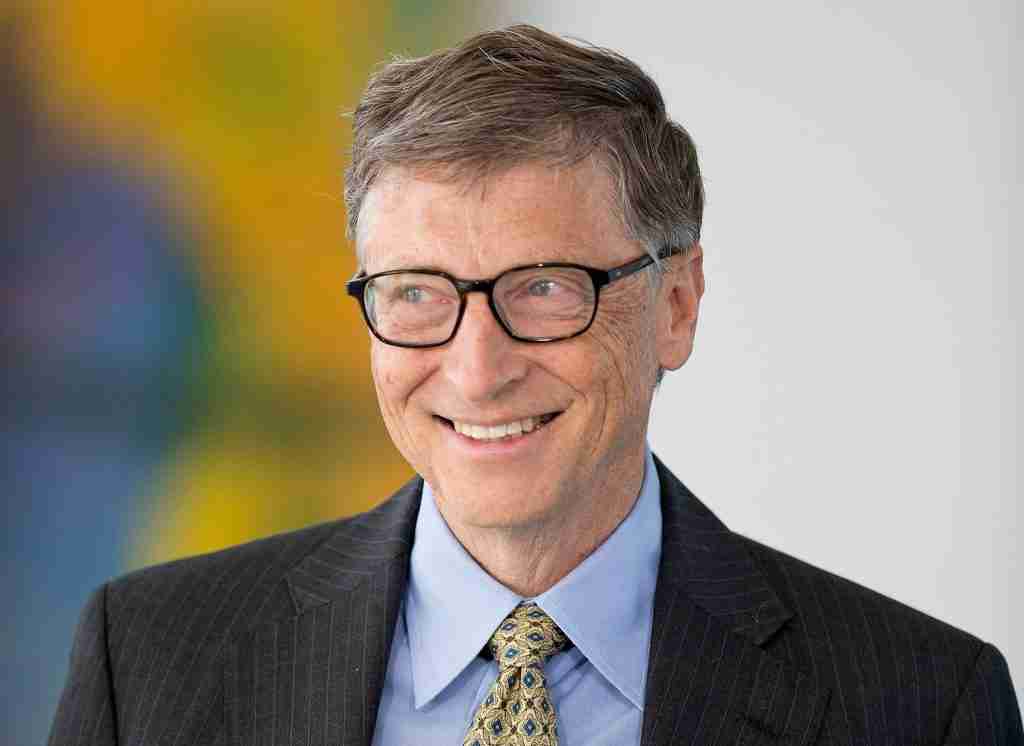 William H. Gates III was born on October 28th, 1955 to William H. Gates II (Today he goes by “Bill Gates Sr.”) and Mary Maxwell Gates. He’d grow up alongside his older sister, Kristi and younger sister, Libby. Bill Gates Sr. was a prominent lawyer in the Seattle, Washington area they lived in, while Mary served on the board of directors for First Interstate BancSystem and The United Way. Mary’s father was even a national bank president; meaning Gates was born into what can be considered a fairly well-to-do family in the upper-middle-class ranks of America.

Falling In Love With Computers

As a young boy, Bill’s favorite activity was reading, so much so that his parents enacted a ban on books at the dinner table. At 13 years old he was enrolled into the Lakeside School, a private school that offers grades 5-12. In 2018 it was ranked by Niche as the best school in Washington and sixth-best in the United States. Despite his parents initially hinting at him to pursue a career in law like his father, a young Bill Gates couldn’t help his fascination with computers.

He wrote his first software program in BASIC on a General Electric Computer the Lakeside moms had bought with the proceeds of a rummage sale. He programmed a tic-tac-toe game into the machine that allowed users to play against the computer. Eventually, teachers began allowing Gates to simply skip class and pursue his interest in these early models of computers.

Resembling the boyhood-nerd version of a “rat-pack,” soon other students, including Paul Allen, Ric Weiland, and Kent Evans joined in on the fun. Like any group of young boys, they got into some trouble when hacking the computers in order to allow more free usage time.

They had exploited the bugs in Computer Center Corporation’s (CCC) PDP-10’s operating system, initially, CCC planned to ban the boys from using the computer but later caved to their offer to find bugs in exchange for more free computer time. This ultimately catalyzed Gates education in programming in that now he would visit the company’s headquarters and learn the various codes being written. This relationship ended in 1970 due to CCC going out of business.

These experiences, combined with his passion for a machine that at such a young age offered some form of real-world success, made his skills so respected The Lakeside School allowed him to program the software that decided students class schedules. Naturally, he placed himself in classes filled with what he would call “A disproportionate number of interesting girls!”

Bill being at the ripe age of 17 years old, teamed up with Allen to launch their first venture together called Traf-O-Data, which made it easier for people to count traffic (Cars) on highways. Traf-O-Data closed its figurative doors when it came time for Gates to attend college, they’d be separated but keep in touch. Upon graduation in 1973, Bill had earned National Merit Scholar status and scored 1590 out of 1600 on the SAT. He was accepted to Harvard University, choosing a pre-law major (likely encouraged by his parents) however, registered himself for mathematics and computer programming courses.

Going From Drop-Out  to CEO

Early on in his collegiate career, Gates had little to no interest in actual class and would spend the majority of his time in the school’s computer labs. Very much so resembling his habits at Lakeside School. He was that kid that hardly spent any time on homework or studying yet somehow on talent alone managed to get an A on the test.

Due to constantly having to work on something, his social life was overall lacking. When time permitted, Gates enjoyed playing video games and poker with his buddies. He was pretty awkward with the ladies, so much so that dates seemed more like interviews than genuinely getting to know each other. He likely didn’t intend to be or make things awkward. Bill was simply a mismatch with many of the people he encountered at his age. They were lost, he was found.

Bill Gates childhood friend and previous business partner, Paul Allen, moved to Boston for a job in 1974, immediately they rekindled their friendship. In January of 1975, the magazine Popular Electronics announced the arrival of the first personal computer called “ALTAIR 8800,” Gates and Allen knew this was the beginning of an industry that would not just change computers forever but society itself.

The two soon learn that the maker of the ALTAIR 8800, Micro Instrumentation and Telemetry Systems (MITS), was in search of somebody who could make software for their computers. They get on the phone with the owner of MITS, convinced him that they had been developing a program to run on the ALTAIR 8800, and arranged a meeting date a few weeks away to demonstrate what they had.

The truth was, Gates and Allen did not have any kind of software written. After hanging up the phone they worked day and night to get the code ready in time. They didn’t even have their own version of the computer to test their product on! The two manage to finish what they hope will work best with the ALTAIR 8800 in time and Paul Allen travels to MITS headquarters in Albuquerque, New Mexico for the moment of truth. Talk about “Last-minute,” Allen even continued coding while on the plane.

During this fateful meeting, the MITS team entered the software into the ALTAIR 8800 computer and to Allen’s delight, it works exactly as he and Gates had anticipated! They earned the contract.

Bill Gates and Paul Allen then decide to launch “Micro-Soft” as a software development company. Gates eventually becomes so consumed by his work that he decides to drop out of college just before his senior year. His parents didn’t take too kindly to that idea so to smooth it over he told them it was a “Leave of absence,” all the while knowing he would never go back.

Bill “The Great” Grows Microsoft into an Empire

Having his whole life dedicated to developing software, Gates became frustrated with the industry because many personal computer users at the time would simply steal their software. Why buy it when they can copy it themselves? Despite this, Microsoft was still making plenty of money and around the $1 million in revenue mark, relocates to Seattle, Washington.

Up to this point, Microsoft can be considered a “Respected up-start” in the software industry, they’ve worked with a number of personal computer builders, however, still haven’t landed the big fish. That’s where Bill’s mother, Mary, comes in. Being on the boards of United Way and BancSystem made her a very well connected person.

Almost as though destiny offered an olive branch from the heavens, present at one of her board meetings is the Chairman of the largest personal computer manufacturer in the world, IBM. She hears he is looking for somebody to code the operating software for a new personal computer they’re rolling out. Mary then arranges for him to meet her son, Bill Gates. What ensues next may be the greatest example of Gates business acumen.

As Microsoft and IBM negotiate the terms of a contract, IBM initially intends to buy the rights to the software Microsoft will write for them. Gates instead suggests that IBM lease the software from them and pay a royalty to Microsoft every time it is sold. IBM isn’t concerned with writing software, views it as more of a necessary evil than a business opportunity, and is ultimately more focused on selling computers so they agree to those terms.

Gates, at 24 years old has managed to negotiate a heavily favorable deal with the largest computer manufacturer on the planet. He needs to get creative though, because he has just about no idea how to go about writing this software.

Microsoft Co-Founder, Paul Allen, catches word of a computer program they desperately need in order to finish this project with IBM. Tim Paterson of SCP had managed to code what he called “Q-DOS” almost as a personal side project. Little did he know, this operating system would be worth hundreds of millions of dollars. Bill Gates would be sure he actually never knew its true worth. Without telling SCP what the software would be used for, Gates manages to purchase it for just $25,000! He soon renames it “MS-DOS.”

Due to a constant need in technical changes to the operating system, Bill Gates eventually hires Tim Paterson onto the Microsoft team, at which point he is told the breadth of the project.

Many people consider this move by Bill Gates “Sneaky,” however, isn’t it simply making the most of your situation? Business is cutthroat and every possible advantage must be pursued. In addition to his boardroom creativity, Gates work ethic and demanding management style were also immense drivers of the company’s early success. After countless sleepless nights they fulfill the IBM order, the company hits $140 million in sales, and Bill is a meager 30 years old.

He is soon to cross paths with another 30 year old located down in Northern California named Steve Jobs. Bill and Steve were working together on a software program when in confidence, Steve provided his “Partner” at the time with all kinds of Apple programming information. Gates even suggests to Steve that he should patent Apple’s work.

Being more focused on getting a personal computer into the hands of the everyday American consumer, Jobs never takes the time to patent his technology. As any competitor would, Gates uses the programming information to his advantage and launches a new software that’s eerily similar to what is used for Apple’s Macintosh computer; its name: “Microsoft Windows.”

Despite, an uncanny resemblance, Microsoft is able to prove in court that there are fundamental differences between the two programs and wins the legal case Apple pursues against them.

The fact of the matter is while every other company was absolutely tunnel-vision focused on getting the best physical computer in the hands of consumers, Gates was creating a monopoly on the software every one of those computers would be using, no matter the company that built it. In 1986 Microsoft IPO’s with Gates owning 45% of its stock, he is first considered a Billionaire at 31 years old.